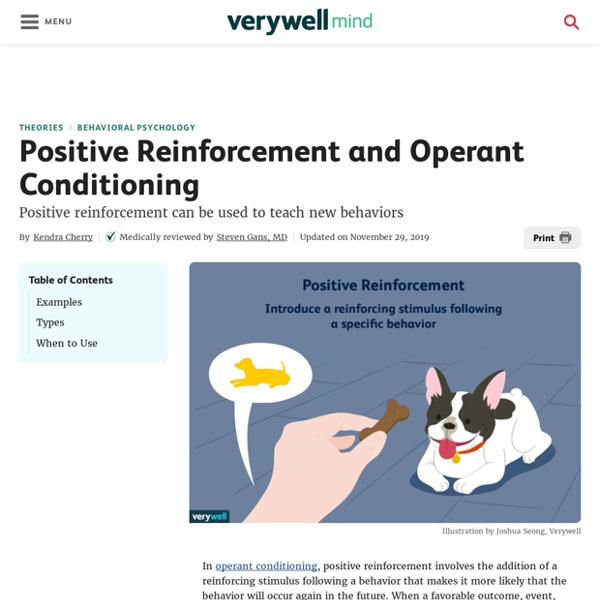 Negative Reinforcement and Operant Conditioning Negative reinforcement is a term described by B. F. Skinner in his theory of operant conditioning. In negative reinforcement, a response or behavior is strengthened by stopping, removing, or avoiding a negative outcome or aversive stimulus.1 Overview Positive Punishment and Operant Conditioning Positive punishment is a concept used in B.F. Skinner's theory of operant conditioning. How exactly does the positive punishment process work? The goal of any type of punishment is to decrease the behavior that it follows. In the case of positive punishment, it involves presenting an unfavorable outcome or event following an undesirable behavior.

The Difference between Positive/Negative Reinforcement and Positive/Negative Punishment February 5, 2013 7:40 pm Published by Kelley Prince M.A., BCBA In Applied Behavior Analysis, there are two types of reinforcement and punishment: positive and negative. It can be difficult to distinguish between the four of these. Therefore, the purpose of this blog is to explain the differences in order to help parents and professionals develop appropriate interventions to improve behavior. Reinforcement The Study of Punishment in Psychology Punishment is a term used in operant conditioning to refer to any change that occurs after a behavior that reduces the likelihood that that behavior will occur again in the future. While positive and negative reinforcements are used to increase behaviors, punishment is focused on reducing or eliminating unwanted behaviors. Punishment is often mistakenly confused with negative reinforcement. The difference: Reinforcement increases the chances that a behavior will occur and punishment decreases the chances that a behavior will occur. Types of Punishment

Discipline for Teens: Strategies and Challenges When your child becomes a teenager, your parenting role is likely to shift. You may find yourself becoming more of a guide, rather than an enforcer. That’s not to say your child won’t need you to intervene when there are safety issues or that your teen won’t need consequences. But, by now, it’s OK to let your child make some choices on their own, even when you think it’s a bad choice. Seminar 3 at CCNY » Punishment as a device for accident prevention. Deterrent effects of traffic enforcement. From the very beginning of road traffic history people understood that without any laws or regulations, all movement on the roads would be in the so-called “state of nature,” which means that the molecules within an environment, represented as cars on the city streets, would be in constant and uncontrolled motion, allowing for random collisions and accidents. The existence of this traffic’s tendency towards chaos contributed to the evolution of traffic environment – first traffic legislation, the “Locomotive on Highways Act”, was adopted by the British Parliament in 1861 and limited the weight of allowed vehicles to 12 tons as well as imposed a 10 mph speed limit (Ross, 1993). Furthermore, more and more elements and control devices have been added to the system, including first license plates in France in 1893, first driver license in the U.K. in 1904, and the first traffic light in Ohio in 1914 (Legge et al., 1993).

Department of Psychological and Brain Sciences Schedules of reinforcement are the precise rules that are used to present (or to remove) reinforcers (or punishers) following a specified operant behavior. These rules are defined in terms of the time and/or the number of responses required in order to present (or to remove) a reinforcer (or a punisher). Different schedules schedules of reinforcement produce distinctive effects on operant behavior. Interval Schedule Interval schedules require a minimum amount of time that must pass between successive reinforced responses (e.g. 5 minutes).

This is a summary of positive reinforcement and examples of how they can applied to real life situations. by callistael Mar 28