SHTF Plan - When the Shit Hits The Fan, Don't Say We Didn't Warn You. 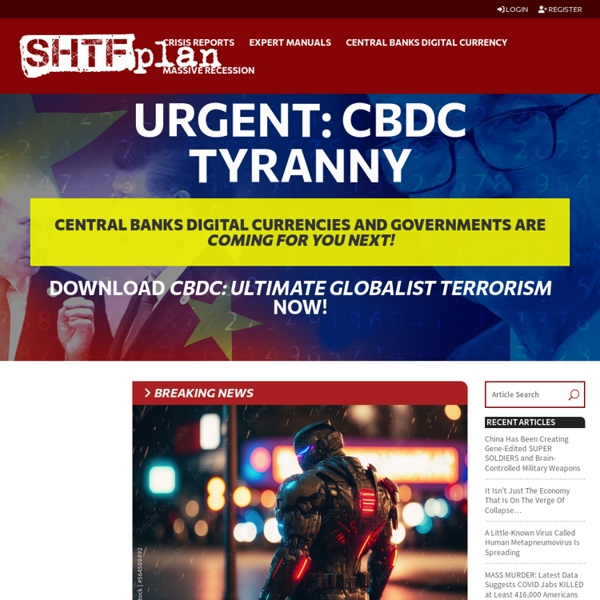 Comment by Satori: "kinda like my paycheck ?? direct deposit I never actually touch it debit card on line payments on line transfers etc etc my “money” is..." Comment by RickInOregon: "When canning bread, if your recipe calls for egg, then substitute it a product called “knox”. Two table spoons of water to one pack..." Comment by Satori: "damn skippy" Comment by chickenlittle: "If I don’t see it, it ain’t real… Bitcoin exists in ones and zeros. Anything with bytes can be hacked and taken in..."

Survival Skills: Solar Water Disinfection Largely advocated for developing countries, solar water disinfection is gaining some traction in the survival skills crowd. Imagine an end to boiling your water in order to make it safe. Consider how nice it would be to no longer need expensive water filtration devices or potentially toxic water-treatment chemicals. Sounds great, right? Too good to be true, even… In reality, solar water disinfection (SODIS) really is a good fit for equatorial countries with abundant strong sunlight and few other resources.

The Great American Genocide We’ve reached the point that any person with critical thinking skills can no longer deny that we are being deliberately poisoned. Nearly everything that is reasonably priced to eat or drink is actually toxic. The glowing health claims and the stamps of approval from the EPA, the FDA, and USDA, are fraudulent smoke and mirrors – people are actually being deceived into spending money to purchase the substances that will lead to disease and demise. A chemical warfare has been declared on us. The battlefields are our homes, the grocery stores, the pharmacies. This is genocide, and we are the intended victims.

What should I do? The most common question by far we get on this website is “What should I do?” Once people watch The Crash Course and are awakened to the very real threats posed by Peak Oil and reckless monetary policy, they understandably want to know how to position themselves intelligently. Our recommendation: start building resilience into your life today. Survival Joe by Survival Joe | Conspiracy Theories • Police State • Politics • Social Disorder Agenda 21: The Driving Force Behind Recent Land Grabs? With increasing regularity, the BLM has been attempting to grab more and more land from U.S. citizens. The real question is why? Survival Shelter 1. Everything can be breaked, forced, overwhelmed “Let them come, I will take down all of them” Vanishing Point: How to disappear in America without a trace Where there's water, life is possible. True, it may be very difficult and very hard to live, depending, but anyone who's driven, hiked, or camped in the American South West will have noticed that cities and ranches crop up where there's surface water or where there's been a well dug. Within the state of California, Nevada, Arizona, Utah, New Mexico, and Colorado, there are deserts, mesas, mountains, and forests where normally people never or rarely visit; not-so-secret places where there's water, access to a road within a day's hike, and where a fairly rugged individual may hide while remaining basically healthy, marginally well fed, and reasonably sane. In this section I'll look at two such environments, neither of which I would recommend, but one of which I'd suggest is a reasonable way to live in basic health while either on the run, hiding out from the law, old girl friends, the draft for an illegal war, putative wives and such. Where exactly? How I Would Do It

Herbs & Herbal Uses Herbs in medicine, cooking, and magic. Find charts, planting tips, and other uses for these valuable plants below. Imagine....awakening in the morning and stepping outside to a lush and fragrant paradise....which exists to satisfy your own culinary, medicinal, and even spiritual needs..... Survival Homestead Unfortunately, there are a vast number of people who because of financial necessity, live smack-dab in the middle of sprawling metropolitan areas. For these people, survival plans must take into account the fact that in the event of a national disaster or catastrophic local event, the most dangerous place to be would be in the city or the surrounding suburbs. Its not called the urban jungle without reason. A devastating disaster can result in the immediate breakdown of civil authority, municipal infrastructures, loss of communication and mobility.