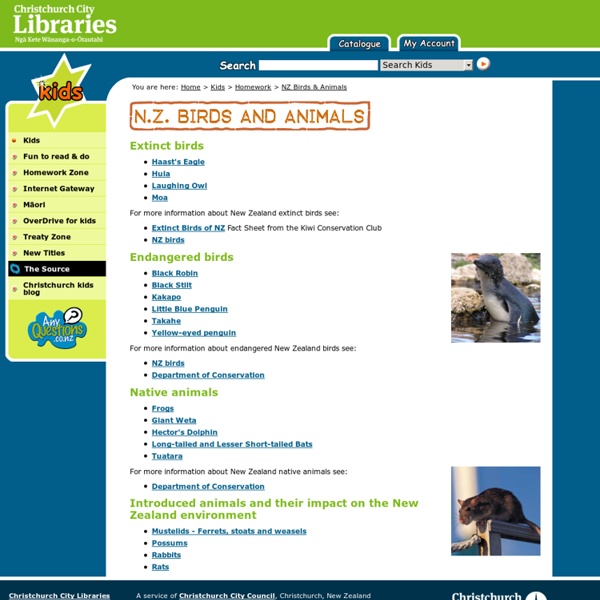 WWF New Zealand - Protecting our native species New Zealand is a true ‘hot spot’ for albatrosses,. Nearly half of the world’s 22 albatross species breed here, and many of these breed nowhere else. Yet tens of thousands of seabirds including albatross are killed each year by fishing operations. Of the species that breed only in New Zealand, the Chatham albatross is listed by the World Conservation Union (IUCN) as 'critically endangered' and the northern royal albatross is 'endangered'. To stop seabird numbers declining further, WWF is part of Southern Seabird Solutions, which unites fishers, industry, government and WWF in the common cause of saving seabirds. Southern Seabird Soultions exists to help fishers fish smarter, ensuring seabird-friendly fishing is practised throughout New Zealand fleets and internationally, so more seabirds return to New Zealand shores safely.

Kiwi The Kiwi is endemic, meaning it is only found in New Zealand. New Zealanders have adopted it as their national symbol. A looong beak Kiwi have long beaks with nostrils at the tip for sniffing out their favourite foods like worms, spiders and other insects. Their beaks also have organs that sense vibrations in the soil which helps them find wriggling insects underground when they poke their beak deep into the dirt. Teeny, tiny wings Kiwi have wings but they are very very small which means kiwi are flightless. Camouflage feathers Kiwi feathers are rough, shaggy and brown and have special patterns and colours to camouflage them on the ground. What's that smell? Kiwi have a very distinctive smell - some say that they smell like a forest mushroom. Kiwi kick boxers Kiwi defend themselves using their powerful legs and sharp claws to kick and scratch at anything attacking them. Supersized eggs Female kiwis lay enormous eggs that can take up 20 percent of their body and weigh around 430g. Night Walkers

New Zealand Plants and Animals Image by Jon Sullivan Department of Conservation A useful resource that outlines the different aspects of the Department of Conservation with a particularly useful link on native species and what threatens them. Suggested level: intermediate, secondarydoc.govt.nz/conservation/native-animals/birds/ Many Answers To discover information on the home work site Many Answers use the search term plants. Suggested level: primary, intermediate, Native Forests This fact sheet from the Kiwi Conservation Club's website describes the different types of native forest, why our forests are so important and how we can help protect them. Suggested level: primary, intermediatewww.kcc.org.nz/plants/nativeforests.asp Nature watch NZ The Nature watch NZ website is well set out with thumbnail pictures to help guide you through the information provided by Wikipedia on native flora and fauna. Suggested level: New Zealand birds online New Zealand Bush

New Zealand country profile - Overview New Zealand is a wealthy Pacific nation dominated by two cultural groups: New Zealanders of European descent; and the Maori, the descendants of Polynesian settlers. It is made up of two main islands and numerous smaller ones. Around three-quarters of the population lives on the North Island, which is also home to the capital, Wellington. Agriculture is the economic mainstay, but manufacturing and tourism are important. Visitors are drawn to the glacier-carved mountains, lakes, beaches and thermal springs. Because of the islands' geographical isolation, much of the flora and fauna is unique to the country. New Zealand plays an active role in Pacific affairs. Read full overviewRead more country profiles - Profiles by BBC Monitoring Population 4.5 million Area 270,534 sq km (104,454 sq miles) Major languages English, Maori Major religion Christianity Life expectancy 79 years (men), 83 years (women) Currency New Zealand dollar Getty Images Prime minister: John Key Read full profile

Threatened species New Zealand’s lizard-like tuatara once lived throughout New Zealand, but became extinct on the mainland after humans arrived. The species survived on some nearshore islands, but people, dogs, cats and rats soon took their toll. Fortunately, people can also do good: raising tuatara in captivity, and removing predators from the islands. Full story by Gerard Hutching and Carl Walrond Main image: Mahoenui giant wētā A quick, easy summary Read the Full Story What is a threatened species? When a species dwindles to very low numbers or lives in just one place in the wild, it is threatened: it may become extinct. Why do species become threatened? It is natural for species to slowly die out. destroying habitats (e.g. farming, pollution) bringing in weeds and pests over-harvesting (e.g. fish, birds). Human impact in New Zealand New Zealand’s plants and animals evolved free of many predators. Threatened species Saving birds … and other species Also being saved and protected are rare species such as:

New Zealand Activities | Activities & Things to Do in New Zealand Skiing, bungy jumping, hiking, jet boating... New Zealand is the ultimate destination for fun and adventure. Your only problem will be finding the time to fit everything in! Discover some of New Zealand's best kept secrets, with world class wineries and wine regions, amazing walking and hiking amongst the spectacular landscapes and national parks of New Zealand, epic ski fields for skiing and snowboarding enthusiasts, and top mountain biking and cycling tracks and trails. Wherever you go in New Zealand you will have no trouble finding activities.