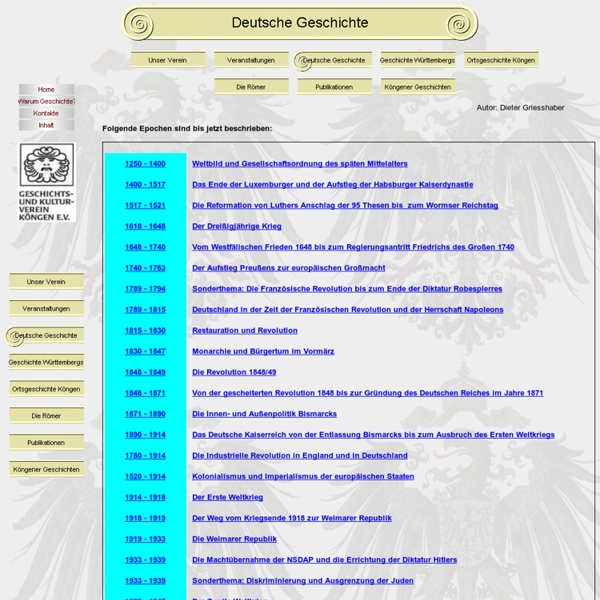 THE CHINESE RAILROAD MEN Central Pacific Railroad Photographic History Museum © 2014 CPRR.org. Use of this Web site constitutes acceptance of the User Agreement which permits personal use web viewing only; no copying; arbitration; no warranty. By STAN STEINER 99 Incredible YouTube Channels for History Buffs If you love history, or just want to learn more about it, YouTube has exactly what you need. Always up to the challege of providing thorough, accurate information, YouTube delivers channels from leading names in historical studies, from The Smithsonian to the Discovery Channel. You’re sure to find just the right information you need for your lecture, lesson plan, or perhaps just your personal viewing pleasure. General History These videos can give your students a better insight into historical events. Art History

maps home page Down to: 6th to 15th Centuries | 16th and 19th Centuries | 1901 to World War Two | 1946 to 21st Century The Ancient World ... index of places Aegean Region, to 300 BCE Aegean Region, 185 BCE 30 Life-Enhancing Things You Can Do in 30 Minutes or Less Many of us attempt to measure our happiness based on the duration of certain favorable experiences in our lives. The longer a favorable experience lasts, the happier we think we’ll be. But the truth is, life is simply a string of small, independent moments that are always changing.

Explore the Ancient Web! Under founding of denmark the picture of a statue is not gorm the old, but holger danske/ ogier the dane. Holger Danske is normally regarded as a Danish national symbol. He is first mentioned in literature as one of the French king Charlemagne’s warriors in La Chanson de Roland from around 1060. In this Chanson he is called Oger le Danois, his name being the only link to Denmark. In the later epos La Chevalerie d’Ogier de Danemarche (1200-1215) he is portrayed as the main character and is described as a son of the Danish king Gudfred (d. 810), an enemy of Charlemagne. His first appearance in Nordic literature is in the saga Karlemagnússaga from the latter part of the 1200s, which in the main consists of passages translated from French texts.

Oil Field Pictures" Circa 1955: An oil worker is surveying for oil deep in the Indonesian jungle of Sumatra. (Hulton Archive/Getty Images) In September of 1997, fires burn from the tops of tall stacks at the Tengiz oil field, on the northeastern shore of the Caspian Sea in Tengiz, Kazakhstan. The Tengiz field is one of the largest oil fields in the world, with several billion barrels of reserves. Elementary Calculus This is a calculus textbook at the college Freshman level based on Abraham Robinson's infinitesimals, which date from 1960. Robinson's modern infinitesimal approach puts the intuitive ideas of the founders of the calculus on a mathematically sound footing, and is easier for beginners to understand than the more common approach via limits. The First Edition of this book was published in 1976, and a revised Second Edition was published in 1986, both by Prindle, Weber & Schmidt. The book is now out of print and the copyright has been returned to me as the author.

How to Manage Priorities with Excel: 15 steps (with pictures) Edit Article Edited by RMunsonNJ, Krystle, Sarah Eliza, Sondra C and 17 others Writing your priorities on paper works if you’re able to knock them off in an afternoon. With a torrent of incoming tasks at home or work, many get carried over to the next day (or week or month). HISTORY CHANNEL First to purchase will own this one of a kind asset 1,538 Customers shopping on HugeDomains right now! 73% of all domains registered on the Web are .coms. The reason is simple: .com is the where most of Web traffic happens. Owning a premium .com gives you great benefits including better SEO, name recognition, and providing your site with a sense of authority.