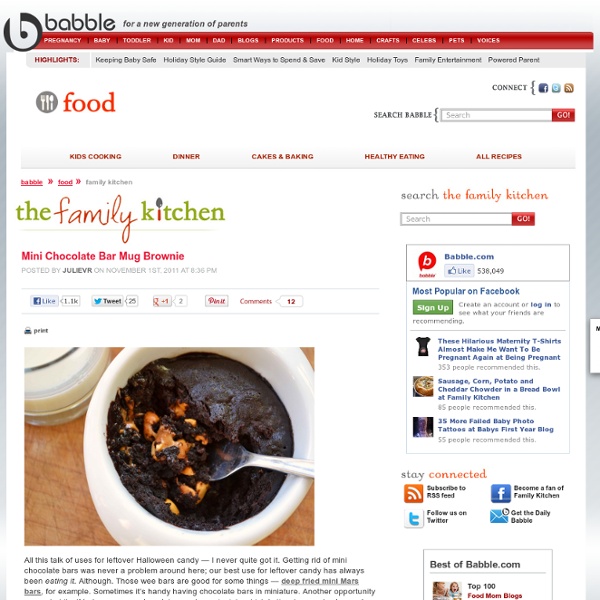 All this talk of uses for leftover Halloween candy — I never quite got it. Getting rid of mini chocolate bars was never a problem around here; our best use for leftover candy has always been eating it. Although. Those wee bars are good for some things — deep fried mini Mars bars, for example. Sometimes it’s handy having chocolate bars in miniature. Another opportunity presented itself today: a gooey chocolate mug brownie, into which I stirred a couple chopped up mini bars: a Snickers and an Oh! Stir up some flour, cocoa, sugar, oil and milk or water. Chop up your favorite candy — preferably something with gooey caramel or peanut butter — and stir it in. Microwave for 60 seconds — just enough time to get a glass of milk and a fork. Dive in. 16 more candy-inspired recipes!

Six Decorative Pie Edge Techniques & Pauladeen.com - StumbleUpon Six Decorative Pie Edge Techniques By The Paula Deen Test KitchenHow To: Six Decorative Pie Shell Edges to Inspire Put your forks away! Instead of the usual “pressing of the tines” ritual around the perimeter of your holiday pies, let these six suggestions be your inspiration and get your creativity flowing. The possibilities and pies are endless. Braid: Brush rim of single-crust pie shell with water. Just a Taste & Candied Bacon and Fried Eggs Candied Bacon and Fried Eggs Everyone knows if you eat something that’s candied while eating something else that’s fried, then the calories in those two foods just cancel each other out. It’s like multiplying two negative numbers to get a positive. Add bacon and eggs to the equation and you’ll be buying smaller jeans by the time you’re finished reading this post. Your sticky-sweet success all comes down to a simple technique that guarantees the crispiest, crackliest crunch. Sound intriguing?

The Gunny Sack: Peanut Butter Cup Brownies In A Jar I made these little beauties for my party on Monday and they were delicious! Over the top?? Sure, but delicious anyway! Chocolate Chip Cookie Dough Truffles I’ve never liked chocolate chip cookies. Go ahead and throw tomatoes at me if you’d like, but I don’t like ’em. They’re just a plain old cookie, after all, with a few studs of chocolate chips in them. They’re nothing special to me, unless you get some cookie dough-action before it meets its fate in the oven. Now you’re talkin’. I’d much rather drown my sorrows in a bowl of cookie dough than nibble a dozen “cookies” dipped in milk. Trick or Treat! Halloween Cookie Dough Pops Happy Halloween! Here are some fun treats to help celebrate today. I made these sprinkled Halloween pops over the weekend, and they turned out so cute, I just couldn’t not share them today! We all know that cookie dough is the best part of making cookies… And what could be more fun than cookie dough dipped in candy and covered in sprinkles? It’s cookie dough!

Vanilla Latte Cookies November 3, 2011 | Print | E-mail | Filed under 12weeksofchristmascookies, cookie Now that Halloween is over (and we’re halfway through the 12 Weeks of Christmas Cookies!), are you already planning for Thanksgiving? I know some who are already knee-deep in planning, and others who haven’t even thought about it yet. I’m somewhere in between; since it’s my turn to host again this year, I’ve been trying to put together a menu at least so that I can let people know what else to bring. So far it’s slow-going, although I do have a few ideas in mind.

Cookie Dough Dip Go put on your stretchy pants. Seriously. Do it now. Cheesecake Stuffed Strawberries Cheesecake Stuffed Strawberries These cheesecake stuffed strawberries are the perfect dessert treat! Can I just say that I have died and gone to heaven. Cheesecake stuffed strawberries….how have I not made these before?! I’m serious. They are amazing! Two Peas & Their Pod - StumbleUpon Twix Caramel Popcorn Every Fall we make caramel popcorn, it is a tradition in our house. Over the weekend we were hanging out at home with the baby and watching football. I thought it was the perfect day to bust out a batch of caramel corn, so I asked Josh if he could watch the baby while I went to work. Of course, he said yes:) I decided to surprise him by jazzing up our traditional caramel corn recipe.

My Baking Addiction - StumbleUpon If you happen to read MBA on a regular basis, you may remember me discussing my fear of yeast and my attempt to conquer that fear with the help of Amber from Bluebonnets and Brownies. Well since that post a couple of months back, I have been a bread baking fool and no longer doubt myself in the yeast department. In fact, I probably have more bread baking supplies and tools than some bakeries and with that came a serious addiction to the King Arthur Flour website. Since I’m no longer a yeast novice, you can imagine how excited I am to flaunt my newly developed skills for this week’s Holiday Recipe Exchange sponsored by Red Star Yeast.

Manifest Vegan - StumbleUpon I have no clue where I originally saw this idea years ago–but in today’s blogging world, apple nachos have become just about as ubiquitous as raw ballz… But, there may still be a few folks remaining who aren’t tuned into all the apple nacho hoopla. If you’ve never tried them, give ‘em a whirl! They are ridiculously easy and taste much more awesome than they sound.

Cinnamon Toast&Rolls - Circle B Kitchen - Circle B Kitchen - StumbleUpon The USDA released its new food pyramid the other day (which is actually a plate now instead of a pyramid), and I am sorely disappointed to report that cinnamon rolls did not appear anywhere on that plate. I think by now most of us know what should be on our dinner plate in terms of healthy, well-rounded nutrient-laden meals, but it is my considered opinion that our breakfast plate should include cinnamon rolls now and then. And not just any cinnamon roll, mind you, but how ‘bout a homemade cinnamon roll hybrid that is a cross between a cinnamon roll and cinnamon toast, is super easy to make and gosh darn delicious. In honor of their ancestry, I call these little gems cinnamon toast rolls, and here’s all you need to make them… Yep.