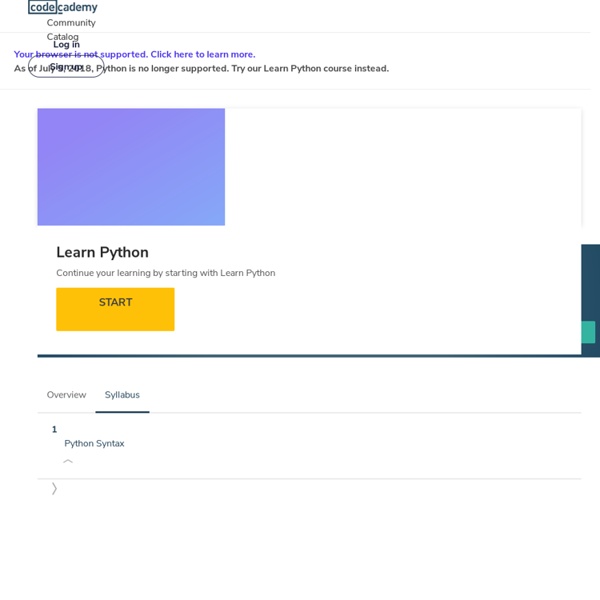 Flash Video - Simple object tag (static publishing) See a demo exercise Wouldn't it be nice if you could play video in your exercises, and in most, if not all browsers? Here's a really multi functional and highly customizable player. Google's Python Class - Educational Materials Welcome to Google's Python Class -- this is a free class for people with a little bit of programming experience who want to learn Python. The class includes written materials, lecture videos, and lots of code exercises to practice Python coding. These materials are used within Google to introduce Python to people who have just a little programming experience. The first exercises work on basic Python concepts like strings and lists, building up to the later exercises which are full programs dealing with text files, processes, and http connections. The class is geared for people who have a little bit of programming experience in some language, enough to know what a "variable" or "if statement" is.

Pong Pong (marketed as PONG) is one of the earliest arcade video games; it is a tennis sports game featuring simple two-dimensional graphics. While other arcade video games such as Computer Space came before it, Pong was one of the first video games to reach mainstream popularity. The aim is to defeat the opponent in a simulated table tennis game by earning a higher score. Tech Talk : Free Online Education and Organization Tools Introducing Tech Talk. Think “Dear Abby” but instead of relationship advice the topic is technology. If you have any questions about software, hardware, internet, programming, web pages, blogs, video games, video consoles, cell phones, money saving technology, local tech resources, security, error messages, virus, spyware, or any other topic concerning technology that you would like answered write to Tech Talk.

YouTube Audio Transcription YouTube added a feature that generates video captions. "We've combined Google's automatic speech recognition (ASR) technology with the YouTube caption system to offer automatic captions, or auto-caps for short. Auto-caps use the same voice recognition algorithms in Google Voice to automatically generate captions for video." The feature only works for English and it's been enabled for a small number of channels that usually feature talks and interviews: UC Berkeley, Stanford, MIT, Yale, UCLA, Duke,UCTV, Columbia, PBS, National Geographic. Another new feature is auto-timing, which lets you upload the transcription of a video and it automatically generates the time codes.

Python's IDLE editor: How to Use - by Dr A. Dawson Copyright Dr A Dawson 2005 - 2016 This file is: Python_Editor_IDLE.htm First created: Tuesday 8th March 2005, 7:28 PT, ADLast updated: Saturday 31st January 2015, 9:05 PT, AD This page explains how to run the IDLE integrated development environment (IDE) for editing and running Python 2.x or Python 3 programs. Python: Inverted Index for dummies An Inverted Index is an index data structure storing a mapping from content, such as words or numbers, to its document locations and is generally used to allow fast full text searches. The first step of Inverted Index creation is Document Processing In our case is word_index() that consist of word_split(), normalization and the deletion of stop words ("the", "then", "that"...). def word_split(text): word_list = [] wcurrent = [] windex = None for i, c in enumerate(text): if c.isalnum(): wcurrent.append(c) windex = i elif wcurrent: word = u''.join(wcurrent) word_list.append((windex - len(word) + 1, word)) wcurrent = [] if wcurrent: word = u''.join(wcurrent) word_list.append((windex - len(word) + 1, word)) return word_list word_split() is quite a long function that does a really simple job split words. You can rewrite it with just one line using something like re.split('\W+', text). Cleanup and Normalize are just to function filters to apply after word_split().