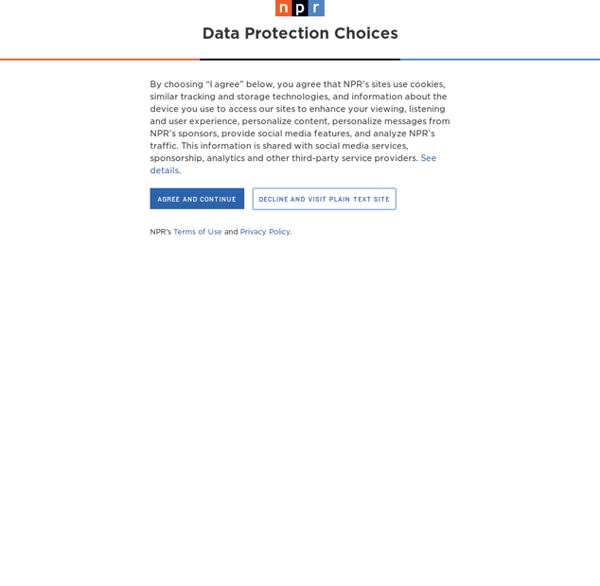 Related:  How it works • $ and lack of reason run the country • Media and Manipulation

White House, EPA headed off chemical pollution study Scott Pruitt’s EPA and the White House sought to block publication of a federal health study on a nationwide water-contamination crisis, after one Trump administration aide warned it would cause a "public relations nightmare," newly disclosed emails reveal. The intervention early this year — not previously disclosed — came as HHS' Agency for Toxic Substances and Disease Registry was preparing to publish its assessment of a class of toxic chemicals that has contaminated water supplies near military bases, chemical plants and other sites from New York to Michigan to West Virginia. Story Continued Below The study would show that the chemicals endanger human health at a far lower level than EPA has previously called safe, according to the emails. “The public, media, and Congressional reaction to these numbers is going to be huge,” one unidentified White House aide said in an email forwarded on Jan. 30 by James Herz, a political appointee who oversees environmental issues at the OMB. Sen.

How feelings took over the world On a late Friday afternoon in November last year, police were called to London’s Oxford Circus for reasons described as “terror-related”. Oxford Circus underground station was evacuated, producing a crush of people as they made for the exits. Reports circulated of shots being fired, and photos and video appeared online of crowds fleeing the area, with heavily armed police officers heading in the opposite direction. Amid the panic, it was unclear where exactly the threat was emanating from, or whether there might be a number of attacks going on simultaneously, as had occurred in Paris two years earlier. Armed police stormed Selfridges department store, while shoppers were instructed to evacuate the building. Inside the shop at the time was the pop star Olly Murs, who tweeted to nearly 8 million followers: “Fuck everyone get out of Selfridge now gun shots!!”

Billionaires v teachers: the Koch brothers' plan to starve public education Arizona has become the hotbed for an experiment rightwing activists hope will redefine America’s schools – an experiment that has pitched the conservative billionaires the Koch brothers and Donald Trump’s controversial education secretary, Betsy DeVos, against teachers’ unions, teachers and parents. Neither side is giving up without a fight. With groups funded by the Koch brothers and DeVos nudging things along, Arizona lawmakers enacted the nation’s broadest school vouchers law, state-funded vouchers that are supposed to give parents more school choice and can be spent on private or religiously affiliated schools. For opponents, the system is not about choice but about further weakening the public school system.

Costly medicines and pus in milk: a Brexit trade deal that’ll make you sick The British public is already scared about a trade deal with the US. They don’t care for chickens washed in chlorine, nor for cows stuffed with hormones. But this week, an epic US document setting out the barriers to foreign trade it would like to remove shows that these concerns are just the tip of the iceberg. Not only do the 400-plus pages detail a stomach-churning list of foods the US would like to import into Britain – more pus in your milk and more pesticides on your vegetables – but they also uncover the US government’s distaste for the way the EU regulates big pharmaceutical corporations generally. The US would certainly ask us to strip away these regulations as part of a post-Brexit trade deal, which in turn poses a direct threat to NHS budgets and our ability to get our hands on life-saving medicines in the future.

Trump tweet labels anti-Kavanaugh protesters as 'paid professionals' Donald Trump condemned protesters who have turned out in droves to oppose the nomination of Brett Kavanaugh to the supreme court, calling them “elevator screamers” funded by professional interest groups. The thousands of protesters descending on the Capitol have included sexual assault survivors pleading with senators by highlighting their own past traumas, but the president dismissed them on Friday as insincere. “The very rude elevator screamers are paid professionals only looking to make Senators look bad. Don’t fall for it!” he said on Twitter.

Americans Want to Believe Jobs Are the Solution to Poverty. They’re Not. To afford basic necessities, the federal government estimates that Vanessa’s family would need to bring in $29,420 a year. Vanessa is not even close — and she is one of the lucky ones, at least among the poor. The nation’s safety net now strongly favors the employed, with benefits like the earned-income tax credit, a once-a-year cash boost that applies only to people who work. Last year, Vanessa received a tax return of around $5,000, which included earned-income and child tax credits. They helped raise her income, but not above the poverty line. If the working poor are doing better than the nonworking poor, which is the case, it’s not so much because of their jobs per se, but because their employment status provides them access to desperately needed government help.

Related:
Related:  How it works   -  $ and lack of reason run the country   -  Media and Manipulation