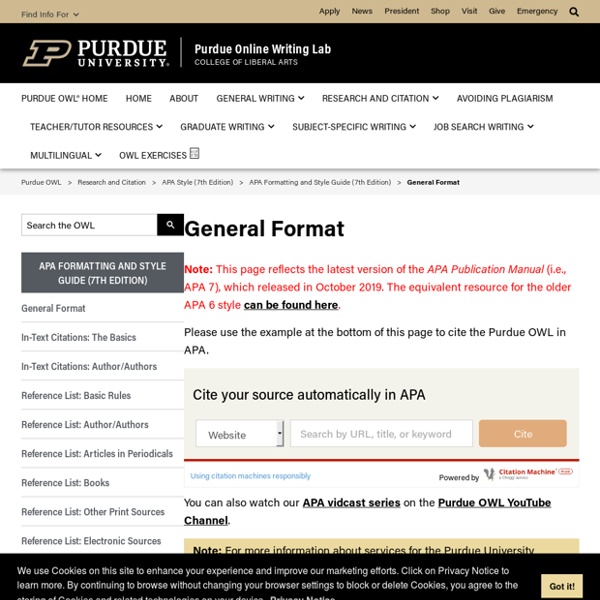 Note: This page reflects the latest version of the APA Publication Manual (i.e., APA 7), which released in October 2019. The equivalent resource for the older APA 6 style can be found here. Please use the example at the bottom of this page to cite the Purdue OWL in APA. You can also watch our APA vidcast series on the Purdue OWL YouTube Channel. General APA Guidelines Your essay should be typed and double-spaced on standard-sized paper (8.5" x 11"), with 1" margins on all sides. Font The 7th edition of the APA Publication Manual requires that the chosen font be accessible (i.e., legible) to all readers and that it be used consistently throughout the paper. While the APA Manual does not specify a single font or set of fonts for professional writing, it does recommend a few fonts that are widely available. Major Paper Sections Your essay should include four major sections: the Title Page, Abstract, Main Body, and References. Title Page A student paper should not include an author note. Abstract

APA Format: Everything You Need to Know Here - EasyBib APA stands for the American Psychological Association. You’ll most likely use APA format if your paper is on a scientific topic. Many behavioral and social sciences use this organization’s standards and guidelines. What are behavioral sciences? Framework for Information Literacy for Higher Education Filed by the ACRL Board on February 2, 2015. Adopted by the ACRL Board, January 11, 2016. This work is licensed under a Creative Commons Attribution-NonCommercial-ShareAlike 4.0 International License. PDF Version Print copies may be purchased from the Association of College and Research Libraries for $15.00 for a package of 10, including standard postage.

Video: A Conversation with William Kamkwamba ’14 At age 24, William Kamkwamba ’14 has accomplished more than many can hope to achieve in a lifetime. The Dartmouth undergraduate built a homemade windmill in his native Malawi at age 14 to provide electricity to his family’s home; watched his book The Boy Who Harnessed the Wind spend five weeks on The New York Times bestseller list in 2009; and on January 19 saw the release of a children’s version of his book, which the Wall Street Journal deems “ingenious” and the Boston Globe calls “powerful.” A documentary about Kamkwamba’s life, “Moving Windmills,” is also in the editing stages and the filmmakers hope to release it later this year. Kamkwamba, who is majoring in environmental studies and minoring in engineering, recently sat down for a video interview (above) with Jessica Chen ’12, the Office of Public Affairs’ Whitney Campbell intern. Kamkwamba discusses what he enjoys about Dartmouth, the projects he’s working on, his hopes for the future, and why he wrote his books.

Hawaii’s ELL students show progress on Nation’s Report Card The results released today by the National Assessment of Educational Progress (NAEP) show double-digit gains for Hawaii’s fourth grade English Language Learners (ELL). State average scaled scores for fourth grade ELL students increased by 26 points for reading and 13 points for mathematics compared to 2017 results, outpacing the nation’s growth (+2 reading; +2 mathematics). Eighth grade ELL students also outperformed their peers nationally with an increase of five points in reading and seven points in mathematics. “As we continue to review the overall results, we are especially encouraged by the progress shown by our ELL students and having discussions on what strategies have contributed to these encouraging outcomes,” said Assistant Superintendent Heidi Armstrong, Office of Student Support Services. Hawaii’s overall results, compared to 2009 scores, show a steady increase in all categories bucking the national trend of decreases in all categories over ten years. Superintendent Dr.

Pixar's 20+ Rules on Storytelling for Teachers and Students A week ago I posted here in Educational Technology and Mobile Learning a poster made by Pixar in which they featured 22 rules on storytelling and it was really so informative reading all the feedback you sent me , however, today I woke up to an email from a colleague of mine teaching in the State in which he shared with me the graphic below. I was really surprised because at the time I published the first poster on Pixar rules of storytelling I did not know that such a graphic exists and going through it I found it way better than the one I initially posted earlier . I mean better in terms of layout and organization of its content. Have a look at it below and let us know what you think of it.

How to format and insert in Word The apa running head (i.e. page header) consists of the title of your paper (maximum 50 characters, left-aligned, all capitals) and the page number (right-aligned). On the title page, your paper title is preceded by the words “Running head:”. Running head example – title page Running head example – subsequent pages APA formatting checklist Smore Newsletters for Education A Faculty/Staff Library Newsletter New Beginnings in January Welcome back from our much deserved Winter break. With the new year, we gain new classes and yes, new students. As always, with our first semester ending short of ninety days, we gain a few extra days for the second semester. That means more time for instruction!

What Languages Are Spoken In Malawi? Malawi is a highly diverse country found in the continent of Africa; its diversity is evident from the many languages spoken in the country. Of the many languages spoken, English is the official language of Malawi while Chichewa is the national language. There are other numerous languages also spoken in the country. However, English which is more often a second language and remains an important language in the country due to the country's history as a British colony. On the other hand, Chichewa is a native language almost spoken by about half of Malawi's population.

Preparing for Cultural Diversity: Resources for Teachers How can teachers effectively engage students from diverse backgrounds? It's a question many teachers face, and of course, there isn't one prescribed strategy that works. Luckily, there are many useful resources to help new and veteran educators explore the subject. If you're looking for a starting point, How Can We Prepare Teachers to Work With Culturally Diverse Students and Their Families? A Non-Freaked Out, Focused Approach to the Common Core CCSS Implementation Tip: When folks start to freak out about the CCSS, go to the Grand Canyon. (That’s me on the left.) When I set out in June 2012 to blog through the Common Core State Standards (CCSS), I was, as long-time readers know, a diehard standards avoider. To me, standards were nothing more than codified wish lists created by committee. They were useful for getting good grades on School of Ed lesson plans, and that was the extent of their value. But as I worked my way through each standard during Summer 2012, I began to sense that, even though there are only 32 “anchor” standards in the entire CCSS Literacy document, there are actually way fewer that need to be taught in an in-depth fashion.

5. The Literature Review - Organizing Your Social Sciences Research Paper - Research Guides at University of Southern California I. Thinking About Your Literature Review The structure of a literature review should include the following: An overview of the subject, issue, or theory under consideration, along with the objectives of the literature review, Division of works under review into themes or categories [e.g. works that support a particular position, those against, and those offering alternative approaches entirely], An explanation of how each work is similar to and how it varies from the others, Conclusions as to which pieces are best considered in their argument, are most convincing of their opinions, and make the greatest contribution to the understanding and development of their area of research. The critical evaluation of each work should consider: