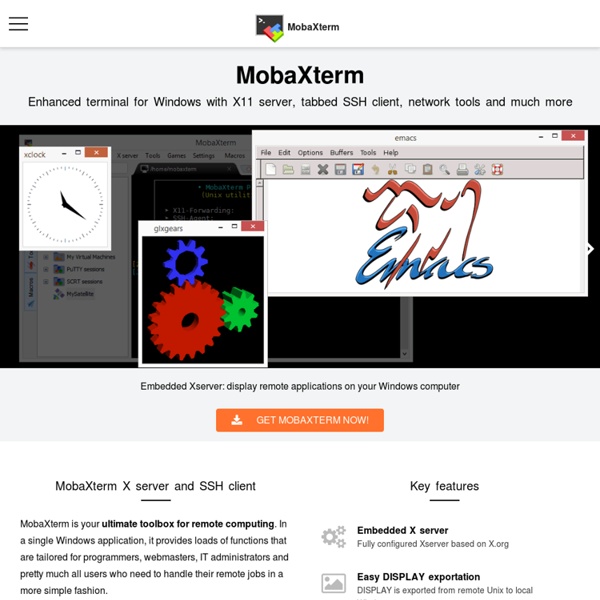 Clonezilla - About KiTTY - Welcome What is KiTTY ? KiTTY is a fork from version 0.67 of PuTTY, the best telnet / SSH client in the world. KiTTY is only designed for the Microsoft® Windows® platform. KiTTY has all the features from the original software, and adds many others as described below: The very first requested features: Technical features: Graphical features: Other features: Bonus: Current version For any question, request, or simply to say what you think about this software fill this form: You can also be part of the success of KiTTY, by translating these pages into your own language. Cyd

Apache Ant - Welcome Wireshark · Go Deep. Hyperlink How to Create a VPN Server on Your Windows Computer Without Installing Any Software Windows has the built-in ability to function as VPN server, although this option is hidden. This trick works on both Windows 7 and Windows 8. The server uses the point-to-point tunneling protocol (PPTP.) This could be useful for connecting to your home network on the road, playing LAN games with someone, or securing your web browsing on a public Wi-Fi connection – a few of the many reasons you might want to use a VPN. Limitations While this is a pretty interesting feature, it may not be the ideal way to allow VPN connections to your local network. You will need the ability to forward ports from your router.You have to expose Windows and a port for the PPTP VPN server directly to the Internet, which is not ideal from a security standpoint. Creating a VPN Server First, you’ll need to open the Network Connections window. Press the Alt key, click the File menu that appears, and select New Incoming Connection. You can now select the user accounts that can connect remotely. Router Setup

Hyperlink ▶ How (and why) to set up a VPN today Marissa Mayer made Yahoo's VPN famous by using it to check on the work habits of her employees. Lost amid today's VPN conversation, however, is the fact that virtual private networks are much more than just pipelines for connecting remote employees to central work servers. And that's a damn shame, because VPNs can be helpful tools for protecting online privacy, and you need not be an office drone to enjoy their benefits. A VPN, as its name suggests, is just a virtual version of a secure, physical network—a web of computers linked together to share files and other resources. Why you want a VPN You have at least four great reasons to start using a VPN. Second, VPNs are particularly useful for connecting multiple networks together securely. Third, if you're concerned about your online privacy, connecting to an encrypted VPN while you're on a public or untrusted network—such as a Wi-Fi hotspot in a hotel or coffee shop—is a smart, simple security practice. Pick your protocol

Firesheep The extension was released October 2010 as a demonstration of the security risk of session hijacking vulnerabilities to users of web sites that only encrypt the login process and not the cookie(s) created during the login process.[3] It has been warned that the use of the extension to capture login details without permission would violate wiretapping laws and/or computer security laws in some countries. Despite the security threat surrounding Firesheep, representatives for Mozilla Add-ons have stated that it would not use the browser's internal add-on blacklist to disable use of Firesheep, as the blacklist has only been used to disable spyware or add-ons which inadvertently create security vulnerabilities, as opposed to attack tools (which may legitimately be used to test the security of one's own systems).[4] Note that even if they did, it wouldn't actually prevent anyone from using Firesheep, as Firefox contains a setting to disable this blacklist.[5] Countermeasures[edit] HTTPS[edit]