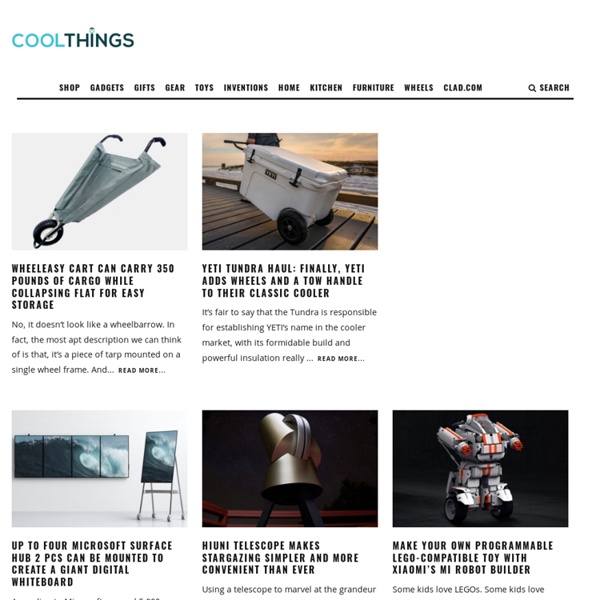 Aside from transporting hazardous chemicals and holding a fire in the park during a cold night, steel barrels are, apparently, also great for turning into a smoker. Seriously. At least, that’s what we gather from the Pit Barrel Cooker, a backyard cooking rig that boasts a “unique vertical cooking experience.” Far from the most stylish outdoor cooker we’ve ever seen, it’s built around a 30-gallon steel drum that’s combined with a grill grate, a charcoal basket, eight stainless steel hooks, [...] Continue reading »

Make Your Own Silhouettes Have you noticed that silhouettes are all the rage these days? I see them in magazines, on blogs, books, and the TV. I’ve priced them out a few times, only to be disappointed by how costly they can be. The Best Apps for Couples Looking for some romantic inspiration for your next date night? You might want to download an app first: Recently, app developers have introduced a bunch of new options designed to help couples enhance their bond. While some experts say that date-planning apps suck all the fun out of being in a relationship, others say they’re a good way to get closer to each other. “Many of these apps give you creative ways to let the other person know they’re special and on your mind,” says Karen Ruskin, a psychotherapist and relationship expert. Need some inspiration for your next outing, dinner for two, or I-love-you gesture? There’s an app for that:

40 Cool Website Design Ideas You Should Check Inspiration February 23, 2011 There is more to web design that meets the eye, but honestly, would you not like it to be a little creative, too? Content and substance definitely are important, however let us not forget the importance of creative web designs in getting and retaining readership. Many people never thought that great content and great web design are possible together. Homemade Holidays: Crock Pot Candles Growing up in my house, we always made our own holiday gifts. We were pretty poor, and I suppose it was our only option. But it was never presented to me like that (I didn’t even know what ‘poor’ was, really, and I had a stupendously fabulous childhood full of ‘thing finding’ and ‘government cheese’.

What Men Notice First When They Check You Out No, it’s not your boobs or butt, according to a new survey Want to get a guy’s attention? There may be something to the whole batting-your-eyelashes trick: Seventy percent of guys say they notice a woman’s eyes before any other trait, according to a new survey of 1,000 British men. While an eye drop manufacturer commissioned the poll, the independent research company One Poll conducted it. 'American Idol' Elimination Night: Who Are the Remaining Top 4? Michael Becker / FOX This week’s American Idol theme of Brit Pop produced some of the strongest vocal performances of the season. Alas, after 60 million votes cast -- according to host Ryan Seacrest -- one of the Top 5 got the boot. VIDEO: 'Idol Hangover': Season 10's Haley Reinhart Talks Taking Risks on 'American Idol,' Feeling Sexy on New Album Sadly, that boot was fitted for country cutie Skylar Laine, the pint-sized Mississippi spitfire who livened up our screens every week with memorable performances, including The Faces’ anthem “Stay With Me” and Creedence Clearwater Revival’s “Fortunate Son.”

The Best Sex Positions for Your Pleasure Welcome back, {* welcomeName *}! {* loginWidget *} Welcome back! Hangover Cures Everyone has a go-to hangover remedy—burnt toast, greasy food, a Bloody Mary. I even know a guy who swears by the harrowing concoction called “The Bull’s Eye,” raw egg mixed into a glass of OJ. I'll pass.

Mission Control 101: How to Use Multiple Desktops on a Mac The Mission Control feature in Mac OS X allows you to arrange windows into several different screens you can quickly switch between. This feature was formerly known as Spaces, and is called virtual desktops or workspaces on Linux. For example, you could have a desktop for work programs and a desktop for personal applications. When you want to switch between work and play, you can simply switch virtual desktops without having to move all those windows around. Getting Started With Mission Control