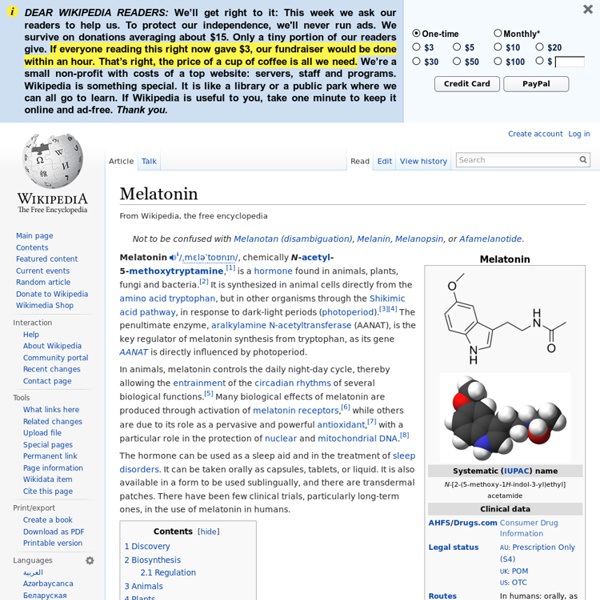 Melatonin The hormone can be used as a sleep aid and in the treatment of sleep disorders. It can be taken orally as capsules, tablets, or liquid. It is also available in a form to be used sublingually, and there are transdermal patches. Discovery[edit] Biosynthesis[edit] Melatonin biosynthesis involves four enzymatic steps from the essential dietary amino acid tryptophan, which follows a serotonin pathway. In bacteria, protists, fungi, and plants melatonin is synthesized indirectly with tryptophan as an intermediate product of the shikimic acid pathway. Regulation[edit] In vertebrates, melatonin secretion is regulated by norepinephrine. It is principally blue light, around 460 to 480 nm, that suppresses melatonin,[24] proportional to the light intensity and length of exposure. Animals[edit] In vertebrates, melatonin is produced at nighttime by the pineal gland, a small endocrine gland[30] located in the center of the brain but outside the blood–brain barrier. Plants[edit] Functions[edit] Related:  Pineal Gland (Bull.S. New Age Meditation)

Serotonin Serotonin /ˌsɛrəˈtoʊnɨn/ or 5-hydroxytryptamine (5-HT) is a monoamine neurotransmitter. Biochemically derived from tryptophan, serotonin is primarily found in the gastrointestinal tract (GI tract), platelets, and the central nervous system (CNS) of animals, including humans. It is popularly thought to be a contributor to feelings of well-being and happiness.[6] Serotonin secreted from the enterochromaffin cells eventually finds its way out of tissues into the blood. In addition to animals, serotonin is found in fungi and plants.[10] Serotonin's presence in insect venoms and plant spines serves to cause pain, which is a side-effect of serotonin injection. Functions[edit] Receptors[edit] Gauge of food availability (appetite)[edit] Serotonin functions as a neurotransmitter in the nervous systems of simple, as well as complex, animals. When humans smell food, dopamine is released to increase the appetite. Effects of food content[edit] In the digestive tract (emetic)[edit] [edit]

Conifer cone The male cone (microstrobilus or pollen cone) is structurally similar across all conifers, differing only in small ways (mostly in scale arrangement) from species to species. Extending out from a central axis are microsporophylls (modified leaves). Under each microsporophyll is one or several microsporangia (pollen sacs). The female cone (megastrobilus, seed cone, or ovulate cone) contains ovules which, when fertilized by pollen, become seeds. Female cones of the conifer families[edit] Pinaceae cones[edit] Intact and disintegrated fir cones The members of the pine family (pines, spruces, firs, cedars, larches, etc.) have cones that are imbricate (that is, with scales overlapping each other like fish scales). Araucariaceae cones[edit] Members of the Araucariaceae (Araucaria, Agathis, Wollemia) have the bract and seed scales fully fused, and have only one ovule on each scale. Podocarpaceae cones[edit] Berry-like Podocarpus cone Cupressaceae cones[edit] Sciadopityaceae cones[edit] Gallery[edit]

Diethyltryptamine Chemistry[edit] DET is an analogue of the common tryptamine hallucinogen N,N-Dimethyltryptamine or DMT. Pharmacology[edit] The mechanism of action is thought to be serotonin receptor agonism, much like other classic psychedelics.[2] DET is sometimes preferred over DMT because it can be taken orally whereas DMT cannot. Biochemistry[edit] Though DET is a synthetic compound with no known natural sources it has been used with mycelium of Psilocybe cubensis to produce the synthetic chemicals 4-PO-DET (Ethocybin) and 4-HO-DET (Ethocin), as opposed to the naturally occurring 4-PO-DMT (Psilocybin) and 4-HO-DMT (Psilocin). Psychosis model[edit] See also[edit] References[edit] External links[edit]

Myristicin Myristicin is a phenylpropene, a natural organic compound present in small amounts in the essential oil of nutmeg and to a lesser extent in other spices such as parsley and dill. It is insoluble in water, but soluble in ethanol and acetone.[1] Uses[edit] Nutmeg has psychoactive properties at doses much higher than used in cooking. In case reports, raw nutmeg produced anticholinergic-like symptoms, attributed to myristicin and elemicin.[2][3][4] In case reports, intoxications with nutmeg had effects that varied from person to person, but were often reported to be an excited and confused state with headaches, nausea and dizziness, dry mouth, bloodshot eyes and memory disturbances. Recreational use of nutmeg has caused poisoning, requiring medical treatment, characterized by nausea, vomiting, collapse, tachycardia, dizziness, anxiety, headache, hallucinations and irrational behavior. Pharmacology[edit] [edit] See also[edit] Elemicin References[edit] Jump up ^ "Myristicin".

Pineal gland The pineal gland, also known as the pineal body, conarium or epiphysis cerebri, is a small endocrine gland in the vertebrate brain. It produces melatonin, a serotonin derived hormone, which affects the modulation of sleep patterns in both seasonal and circadian rhythms.[1][2] Its shape resembles a tiny pine cone (hence its name), and it is located in the epithalamus, near the center of the brain, between the two hemispheres, tucked in a groove where the two halves of the thalamus join. Nearly all vertebrate species possess a pineal gland. The gland has been compared to the photoreceptive, so-called third parietal eye present in the epithalamus of some animal species, which is also called the pineal eye. René Descartes believed the pineal gland to be the "principal seat of the soul" and viewed it as the third eye.[6] Structure[edit] Blood supply[edit] Innervation[edit] The pineal gland receives a sympathetic innervation from the superior cervical ganglion. Histology[edit] Development[edit]

Tryptamine Tryptamine is a monoamine alkaloid found in plants, fungi, and animals. It contains an indole ring structure, and is structurally similar to the amino acid tryptophan, from which it derives its name. Tryptamine is found in trace amounts in the brains of mammals and is believed to play a role as a neuromodulator or neurotransmitter.[2] The tryptamine chemical structure is the backbone for a group of compounds termed collectively tryptamines. The concentration of tryptamine in rat brains is about 3.5 pmol/g.[3] Plants containing tryptamine[edit] Many plants contain small amounts of tryptamine, for example, as a possible intermediate in one biosynthetic pathway to the plant hormone indole-3-acetic acid.[4] Higher concentrations can be found in many Acacia species. Role in vertebrates[edit] Tryptamine acts as a serotonin releasing agent[5] and a serotonergic activity enhancer.[6] It is metabolised by MAO-A and MAO-B.[7] Tryptamine derivatives[edit] General structure of substituted tryptamines

Entheogen A group of peyotes, in cultivation. Peyote has been used in ritual contexts for thousands of years.[1][2][3] With the advent of organic chemistry, there now exist many synthetic drugs with similar psychoactive properties, many derived from these plants. Many pure active compounds with psychoactive properties have been isolated from these organisms and chemically synthesized, including mescaline, psilocybin, DMT, salvinorin A, ibogaine, ergine, and muscimol, respectively. Semi-synthetic (e.g. Etymology[edit] The neologism entheogen was coined in 1979 by a group of ethnobotanists and scholars of mythology (Carl A. Entheogen was coined as a replacement for the terms hallucinogen and psychedelic. Ruck et al. argued that the term hallucinogen was inappropriate owing to its etymological relationship to words relating to delirium and insanity. Entheogens[edit] Species[edit] High caffeine consumption has been linked to an increase in the likelihood of experiencing auditory hallucinations. L. Other

In humans, melatonin is produced by the pineal gland, a small endocrine gland[26] located in the center of the brain but outside the blood–brain barrier. The melatonin signal forms part of the system that regulates the sleep-wake cycle by chemically causing drowsiness and lowering the body temperature, but it is the central nervous system (specifically the suprachiasmatic nuclei, or SCN)[26] that controls the daily cycle in most components of the paracrine and endocrine systems[27][28] rather than the melatonin signal (as was once postulated). by oddsalom Mar 17