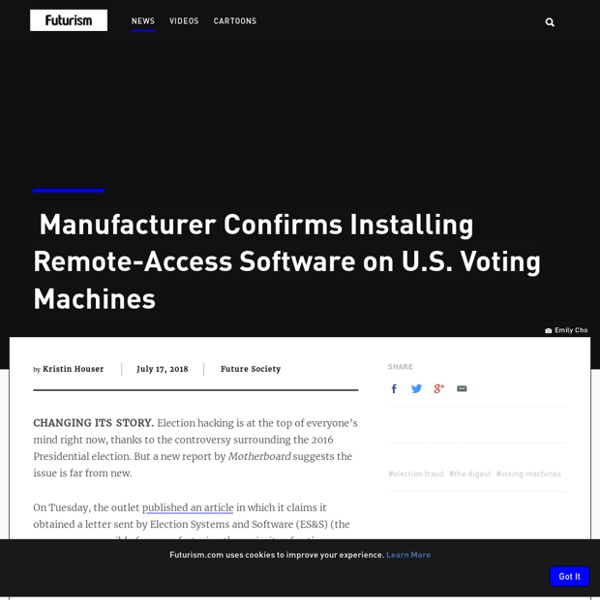 CHANGING ITS STORY. Election hacking is at the top of everyone’s mind right now, thanks to the controversy surrounding the 2016 Presidential election. But a new report by Motherboard suggests the issue is far from new. On Tuesday, the outlet published an article in which it claims it obtained a letter sent by Election Systems and Software (ES&S) (the company responsible for manufacturing the majority of voting machines used in the U.S.) to Senator Ron Wyden (D-OR) in April. In the letter, ES&S reportedly admits that it sold election-management systems (EMSs) equipped with pcAnywhere, a software program typically used by system administrators as a way to access computers remotely, to “a small number of customers” between 2000 and 2006. In a report published by the New York Times in February, the company denied any knowledge of selling machines containing this software. DIRECT ACCESS. BETTER OFFLINE. More on election fraud: A Bipartisan Group of U.S.

60 Environmental Rules on the Way Out Under Trump 1. Revoked Obama-era flood standards for federal infrastructure projects This Obama-era rule, revoked by Mr. Google Just Gave 2 Billion Chrome Users A Reason To Switch To Firefox Berlin, Germany - February 26: In this photo illustration the app of Google Chrome is displayed on a smartphone on February 26, 2018 in Berlin, Germany. (Photo Illustration by Thomas Trutschel/Photothek via Getty Images) Getty

Donald Trump's 'missing' server comments get all of the details wrong Standing beside Russian President Vladimir Putin, President Donald Trump answered reporters' questions about Russia’s interference in the 2016 election and if he believed Putin’s denials over his own intelligence community’s findings. Instead of answering the question directly, Trump began discussing servers. "You have groups that are wondering why the FBI never took the server -- haven't they taken the server. Why was the FBI told to leave the office of the Democratic National Committee?

The Making of the Fox News White House In January, during the longest government shutdown in America’s history, President Donald Trump rode in a motorcade through Hidalgo County, Texas, eventually stopping on a grassy bluff overlooking the Rio Grande. The White House wanted to dramatize what Trump was portraying as a national emergency: the need to build a wall along the Mexican border. The presence of armored vehicles, bales of confiscated marijuana, and federal agents in flak jackets underscored the message.

'I've paid a huge personal cost:' Google walkout organizer resigns over alleged retaliation A prominent internal organizer against Google’s handling of sexual harassment cases has resigned from the company, alleging she was the target of a campaign of retaliation designed to intimidate and dissuade other employees from speaking out about workplace issues. Claire Stapleton, a longtime marketing manager at Google and its subsidiary YouTube, said she decided to leave the company after 12 years when it became clear that her trajectory at the company was “effectively over”. “I made the choice after the heads of my department branded me with a kind of scarlet letter that makes it difficult to do my job or find another one,” she wrote in an email to co-workers announcing her departure on 31 May. “If I stayed, I didn’t just worry that there’d be more public flogging, shunning, and stress, I expected it.”

Putin's Pants-on-Fire claim about $400 million donation to Clinton from Bill Browder partners Russian President Vladimir Putin offered a novel idea to advance the Russia investigation during a joint news conference with President Donald Trump in Helsinki. Special Counsel Robert Mueller’s team could come to his country, Putin said, if Russian investigators were allowed to go the United States to dig into alleged tax evasion by American-born financier Bill Browder and his associates. "Business associates of Mr. Browder have earned over 1.5 billion dollars in Russia," Putin said through a translator. "They never paid any taxes." Putin continued.

Pope Francis' associates compare right-wing US Christians with jihadists - The i newspaper online iNews Two leading theologians close to Pope Francis have said that American evangelicals and hard-line Catholics have a worldview that is “not too far apart’’ from jihadists. Their article in the journal Civilta’ Cattolica, which has outraged religious conservatives in the US, goes on to accuse right-wing Catholics and Christians of making an unholy pact with President Trump, and of deepening political polarisation in the United States. Some experts have interpreted the article as a call from Pope Francis himself for the church to dissociate itself from the US administration’s right-wing policies on everything from climate change to migration. Pope Francis has previously hit out at President Donald Trump’s proposals to build a wall between Mexico and the US – a policy the pontiff had said was not Christian. The Vatican has refrained from commenting on the article.

Japan to set 5G network relay devices on traffic signals TOKYO (Kyodo) -- The Cabinet on Friday approved a project to install wireless relay devices for 5G network services on traffic signals across the country. Fifth-generation network technology requires more relay spots than the current 4G services as it uses short-length radio waves that cannot pass through buildings. However, there is a lack of suitable locations for new base stations as suitable locations already house equipment for existing services. The Japanese government will, therefore, allow 208,000 traffic signals to be used as spots to set up the new 5G equipment, expecting to complete the network installation by the end of March 2026. The new wireless service can send and receive data some 100 times faster than the current 4G network. Smartphone users, for example, will be able to download a two-hour film in just three seconds.

Sean Hannity cites misleading Obama quote in coverage of Russian election meddling Moments before airing his interview with President Donald Trump in Helsinki, Fox News host Sean Hannity slammed former President Barack Obama for his pre-election rhetoric on Russia. But Hannity’s remarks were misleading, and the words he attributed to Obama were taken out of context. "We all know that Russian election meddling is not new at all," Hannity said in his opening monologue on July 16.

Memo Restoring Use of Private Prisons Is Good News for One Company Memo Restoring Use of Private Prisons [...] Attorney General Jeff Sessions holds a meeting with the heads of federal law enforcement components at the Department of Justice Feb. 9, 2017 in Washington, DC. (Photo by Susan Walsh-Pool/Getty Images) This post originally appeared at The Nation. Attorney General Jeff Sessions’ four-sentence memo rescinding Justice Department guidance to reduce the use of private prisons sent stock soaring for the two companies that dominate the industry, Geo Group and CoreCivic (formerly Corrections Corporation of America). An ‘EpiPen’ for spinal cord injuries Illustration of the human body showing the skeletal system, with the lower spine highlighted in red to indicate pain spots. Image courtesy: Michigan Engineering ANN ARBOR—An injection of nanoparticles can prevent the body’s immune system from overreacting to trauma, potentially preventing some spinal cord injuries from resulting in paralysis. The approach was demonstrated in mice at the University of Michigan, with the nanoparticles enhancing healing by reprogramming the aggressive immune cells—call it an “EpiPen” for trauma to the central nervous system, which includes the brain and spinal cord.

The Heroes of America's Startup Economy Weren't Born in America According to the Entrepreneurship Rate indicator of the Inc. Entrepreneurship Index, Inc.'s proprietary benchmarked score representing the health of American startups, the percentage of entrepreneurs who are immigrants is currently close to a 20-year high. Today, they are a large reason the Inc.