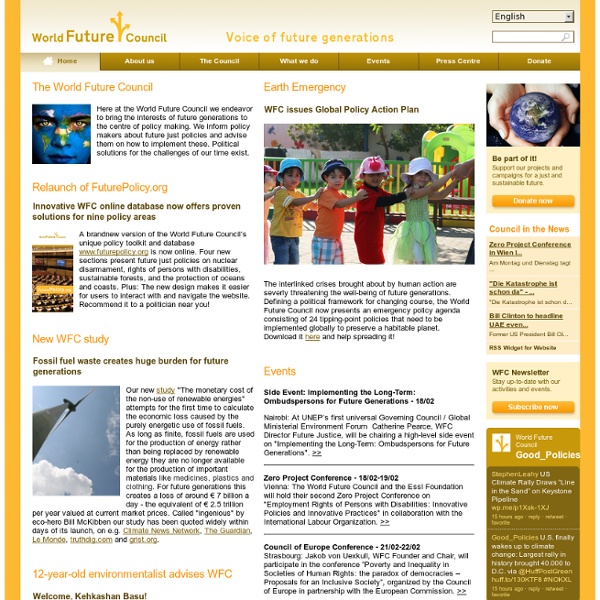 In cooperation with the City of Hamburg the World Future Council brought together 150 mayors, urban planners, practitioners and experts from 35 countries for the Future of Cities Forum. This report summarises the key issues debated during the Forum, drawing on the rich discussions surrounding the vision of regenerative cities. It looks at a selection of the case studies presented at the Forum to outline the value creation resulting from regenerative urban development, the obstacles in the way of progress, and tools to help overcome those challenges. The report aims to engage and empower a wider range of stakeholders in ensuring that our cities continue to offer opportunities for current and future generations to realise their full human potential. Download the report as a PDF here. You can find more information and a short film on the Forum’s dedicated website.

Responses of Arctic Marine Ecosystems to Climate Change 28th Lowell Wakefield Fisheries Symposium Hotel Captain Cook Anchorage, Alaska March 26–29, 2013 Contact: Symposium coordinator, seagrant.meetings@alaska.edu THE FUTURIST Magazine Releases Its Top 10 Forecasts for 2013 and Beyond Each year since 1985, the editors of THE FUTURIST have selected the most thought-provoking ideas and forecasts appearing in the magazine to go into our annual Outlook report. Over the years, Outlook has spotlighted the emergence of such epochal developments as the Internet, virtual reality, the 2008 financial crisis and the end of the Cold War. But these forecasts are meant as conversation starters, not absolute predictions about the future. We hope that this report--covering developments in business and economics, demography, energy, the environment, health and medicine, resources, society and values, and technology--inspires you to tackle the challenges, and seize the opportunities, of the coming decade. With no further ado, THE FUTURIST Magazine releases its top ten forecasts for 2013 and beyond. Video by FUTURIST magazine editor Cynthia G.

Futuring: The Exploration of the Future Futuring: The Exploration of the Future by Edward Cornish. WFS. 2004. 313 pages. Paperback. Many Strong Voices - Programme Overview Linking the Arctic and SIDS The Arctic and Small Island Developing States (SIDS) are directly threatened by climate change and vulnerable to its effects. Both regions face considerable challenges in confronting climate change impacts on their economies, ecologies, and cultures. Print - 110 Predictions For the Next 110 Years · People will be fluent in every language. With DARPA and Google racing to perfect instant translation, it won't be long until your cellphone speaks Swahili on your behalf. · Software will predict traffic jams before they occur. Using archived data, roadside sensors, and GPS, IBM has come up with a modeling program that anticipates bumper-to-bumper congestion a full hour before it begins. Better yet, the idea proved successful in early tests—even on the Jersey Turnpike.

Futurology: The tricky art of knowing what will happen next 23 December 2010Last updated at 02:38 By Finlo Rohrer BBC News Magazine Cheap air travel was among the predictions (illustration from Geoffrey Hoyle's book) A 1972 book which predicts what life would be like in 2010 has been reprinted after attracting a cult following, but how hard is it to tell the future? Hope and climate change: Reasons to remain optimistic No need to hide in a corner: There are a few signs of hope when it comes to climate change. (Photo by Zen Sutherland.) Cross-posted from Huffington Post. With magazines like Scientific American publishing articles titled “Global Warming Close to Becoming Irreversible,” and 15,000-plus temperature records set this spring in the U.S., it’s no wonder the CFO of the business I work for said to me recently, “I have this crippling anxiety about climate change … what are our children going to have to deal with?” At Keystone, in Colorado, ski season is still going on, but a nearby fire meant the lodge was being used as an evacuation center a few weeks ago.

P2P Futures for Futures Studies Jose Ramos proposes six paths: 1. Communion in diversity “Communion in diversity means that, even though we represent radical hybridity, mutating into new contexts, we are drawing upon each other’s knowledge and experience in order to inspire ourselves and continue to evolve and mutate what we do. Futurology - Wikibooks, collection of open-content textbooks If you could see your future, would you try to make it better? If you were a Soviet in 1980 and you knew that spiraling debt would destroy your country, would you do something to stop it? If you were a German in 1933 and knew that the Decree of the Reich President for the Protection of People and State would lead to a world war, tens of millions of deaths, and the leveling of your nation, would you oppose it?