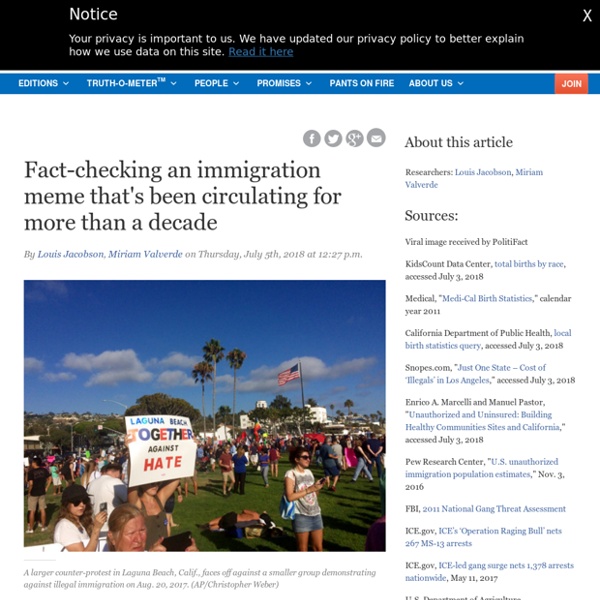 A viral image on social media -- one that’s critical of illegal immigration -- has been circulating for years. The list of claims first circulated in the form of a chain email in 2006, according to Snopes.com. Six years later, we checked several of the claims ourselves. With immigration in the headlines today, these claims are popular again. So we’ll take a fresh look at them here. All told, the list is heavy with claims that are unsupported, misleading, or simply wrong. "43% of all FOOD Stamps are Given to Illegals" This is a bogus number that doesn’t check out mathematically; we rated it Pants on Fire back in 2012. That month, about 40 million people participated in the Supplemental Nutrition Assistance Program, formerly known as the food stamp program. If 43 percent of that assistance went to immigrants in the country illegally, that would mean that 17.2 million of them benefitted from the program. Viral image on the Internet social media postings – Tuesday, July 3, 2018

Related:  How to Think Critically. Fake News • Fake vs Fact • Trump and other Bad Apples

Sorting the Real Sandy Photos From the Fakes With Hurricane Sandy approaching the New York metro area, the nation's eyes are turning to its largest city. Photos of storms and flooding are popping up all over Twitter, and while many are real, some of them -- especially the really eye-popping ones -- are fake. This post, which will be updated over the next couple of days, is an effort to sort the real from the unreal. It's a photograph verification service, you might say, or a pictorial investigation bureau. I’ve Been Reporting on MS-13 for a Year. Here Are the 5 There’s one thing everyone can agree with President Donald Trump on about the street gang MS-13: The group specializes in spectacular violence. Its members attack in groups, in the woods, at night, luring teens to their deaths with the promise of girls or weed. One Long Island boy told me he doesn’t go to parties anymore because he worries any invitation could be a trap. A victim’s father showed me a death certificate that said his son’s head had been bashed in, then lowered his voice and added that the boy’s bones had been marked by machete slashes, but he didn’t want the mother to know that. A teenager who has left the gang told me he considers himself dead already, and is just trying to make sure MS-13 doesn’t kill his family. I’m spending the year reporting on MS-13 members and their associates.

True romance? The intriguing tale of the Russian agent and her Republican lover Most romances don’t end in indictment – but then again, the relationship between Maria Butina and Paul Erickson isn’t like most romances. If anything, the love story between a gun-loving Russian covert agent and a conservative activist-cum-alleged fraudster, reads like a Coen brothers movie. There’s the intrigue of a legal thriller (Bridge of Spies), the self-defeating scheming of a crime drama (Fargo), the excess of a cult classic (The Big Lebowski), and even a bit of romance (just about everything, really, ever). But Butina will be in no mood for plot twists when she appears in court on Thursday for what she hopes will be the last hearing in a saga that has had her sitting in solitary confinement since her arrest in Washington last summer, and on FBI watchlists for years. Butina was arrested last July, the same month that Robert Mueller indicted a dozen other alleged Kremlin-linked intelligence agents in Russia for hacking Democratic computers in 2016.

Information Power The mission of the library media program is to ensure that students and staff are effective users of ideas and information. This mission is accomplished: by providing intellectual and physical access to materials in all formats by providing instruction to foster competence and stimulate interest in reading, viewing, and using information and ideas by working with other educators to design learning strategies to meet the needs of individual students. --Information Power: Guidelines for School Library Media Programs (1988), p.1 Truth, truthiness, triangulation: A news literacy toolkit for a “post-truth” world We were guaranteed a free press, We were not guaranteed a neutral or a true press. We can celebrate the journalistic freedom to publish without interference from the state. We can also celebrate our freedom to share multiple stories through multiple lenses. But it has always been up to the reader or viewer to make the reliability and credibility decisions.

Inside Syria’s Secret Torture Prisons: How Bashar al-Assad Crushed Dissent On the 12th day he wrote a confession. “Make it convincing,” a Capt. Maher told him. “There is someone who drove you. People who think their opinions are superior to others are most prone to overestimating their relevant knowledge and ignoring chances to learn more By guest blogger Tom Stafford We all know someone who is convinced their opinion is better than everyone else’s on a topic – perhaps, even, that it is the only correct opinion to have. Maybe, on some topics, you are that person. No psychologist would be surprised that people who are convinced their beliefs are superior think they are better informed than others, but this fact leads to a follow on question: are people actually better informed on the topics for which they are convinced their opinion is superior? This is what Michael Hall and Kaitlin Raimi set out to check in a series of experiments in the Journal of Experimental Social Psychology.

The Heroes of America's Startup Economy Weren't Born in America According to the Entrepreneurship Rate indicator of the Inc. Entrepreneurship Index, Inc.'s proprietary benchmarked score representing the health of American startups, the percentage of entrepreneurs who are immigrants is currently close to a 20-year high. Bank CEO Stephen M. Calk Charged With Corruptly Soliciting A Presidential Administration Position In Exchange For Approving $16 Million In Loans Audrey Strauss, the Attorney for the United States, Acting Under Authority Conferred by 28 U.S.C. § 515, William F. Sweeney Jr., the Assistant Director-in-Charge of the New York Field Office of the Federal Bureau of Investigation (“FBI”), and Patricia Tarasca, the Special Agent-in-Charge of the New York Region for the Federal Deposit Insurance Corporation Office of Inspector General (“FDIC OIG”), announced today the unsealing of an indictment charging STEPHEN M. CALK with financial institution bribery for corruptly using his position as the head of a federally insured bank to issue millions of dollars in high-risk loans to a borrower in exchange for a personal benefit: assistance from the borrower in obtaining a senior position with an incoming presidential administration.

Our brains rapidly and automatically process opinions we agree with as if they are facts By Christian Jarrett In a post-truth world of alternative facts, there is understandable interest in the psychology behind why people are generally so wedded to their opinions and why it is so difficult to change minds. We already know a lot about the deliberate mental processes that people engage in to protect their world view, from seeking out confirmatory evidence (the “confirmation bias“) to questioning the methods used to marshal contradictory evidence (the scientific impotence excuse). Manufacturer Confirms Installing Remote-Access Software on U.S. Voting Machines CHANGING ITS STORY. Election hacking is at the top of everyone’s mind right now, thanks to the controversy surrounding the 2016 Presidential election. But a new report by Motherboard suggests the issue is far from new. On Tuesday, the outlet published an article in which it claims it obtained a letter sent by Election Systems and Software (ES&S) (the company responsible for manufacturing the majority of voting machines used in the U.S.) to Senator Ron Wyden (D-OR) in April. In the letter, ES&S reportedly admits that it sold election-management systems (EMSs) equipped with pcAnywhere, a software program typically used by system administrators as a way to access computers remotely, to “a small number of customers” between 2000 and 2006.

Trump Takes Credit for Obama's Gains for Vets WASHINGTON (AP) — Boastful on the occasion of Memorial Day, President Donald Trump and his Veterans Affairs secretary are claiming full credit for health care improvements that were underway before they took office. Trump said he passed a private-sector health care program, Veterans Choice, after failed attempts by past presidents for the last “45 years.” That’s not true. The Choice program, which allows veterans to see doctors outside the government-run VA system at taxpayer expense, was first passed in 2014 under President Barack Obama. Trump’s VA secretary, Robert Wilkie, also is distorting the facts.

Fake news 2.0: personalized, optimized, and even harder to stop Fake news may have already influenced politics in the US, but it’s going to get a lot worse, warns an AI consultant to the CIA. Sean Gourley, founder and CEO of Primer, a company that uses software to mine data sources and automatically generate reports for the CIA and other clients, told a conference in San Francisco that the next generation of fake news would be far more sophisticated thanks to AI. “The automation of the generation of fake news is going to make it very effective,” Gourley told the audience at EmTech Digital, organized by MIT Technology Review. The warning should cause concern at Facebook.

Related:
Related:  How to Think Critically. Fake News   -  Fake vs Fact   -  Trump and other Bad Apples