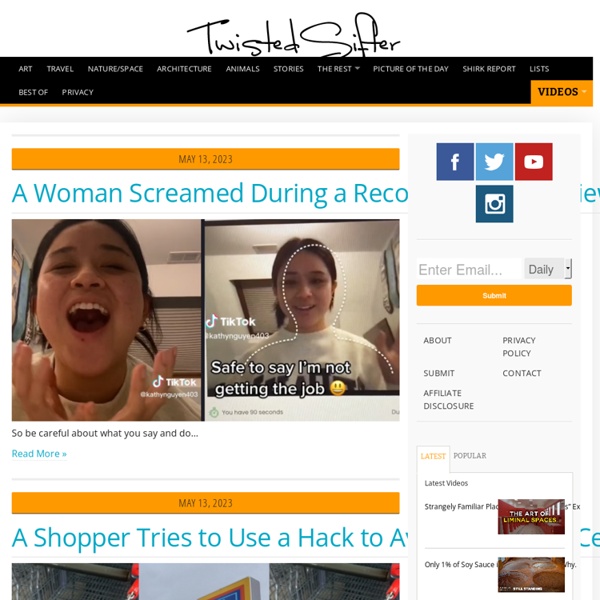 The Precious First Few Minutes Of Class The Precious First Few Minutes Of Class by Suzy Pepper Rollins Students file into class. “Your warm-up is on the board,” we announce. The 388-Year-Old Bonsai that Survived Hiroshima On display at the National Bonsai & Penjing Museum at the United States National Arboretum is this remarkable Japanese White Pine (Pinus parviflora ‘Miyajima’) bonsai sometimes known as Hiroshima Survivor. According to the tree’s display placard, it has been in training since 1625 making it 388-years-old. Oh and it survived the atomic blast in Hiroshima on August 6, 1945. In 1976 as part of Japan’s Bicentennial gift to the American people, bonsai master Masaru Yamaki donated one of his most prized bonsai. The Yamaki family operated a commercial bonsai nursery in Hiroshima for several generations (the nursery is now a private bonsai collection).

50 Images from National Geographic`s 2010 Photo Contest Writen by Bogdan / Comments Off on 50 Images from National Geographic`s 2010 Photo Contest This is one of the most anticipated annual photo contests. The deadline for the submissions is on November 30th so if you have an interesting photo, submit it. 7 Underground Wonders of the World: Labyrinths, Crypts, Catacombs and More Subterranean Scare: 7 Underground Wonders of the World Article by Urbanist, filed under 7 Wonders Series in the Travel category. What motivates humankind to burrow deep into the Earth? From London to Paris, Budapest to Moscow, the USA to Australia, here are seven of the most amazing examples in the world. Some were built for military defense or shelter, many are abandoned while others thrive. These amazing images feature tunnels, caverns, crypts an labyrinths from seven underground location around the world, following the acclaimed 7 Underwater Wonders and 7 Abandoned Wonders of the World from our 7 Wonders Series.

Movies Screen Junkies Honest Trailers – The Hunger Games: Catching Fire HOME > MOVIES >Genres Best & Worst Video Game Movies Honest Trailers – 300 YouthLearn Regardless of what topic you're teaching or the age of the kids you're working with, you'll want to make certain teaching techniques a standard part of your routine. By internalizing these fundamentals until you don't even have to think about them, you'll become a better coach, leader and teacher. Perhaps most important is that you understand and master sound modeling techniques. Kids learn much more by watching you than from anything you say. Good teaching is intentional, and it should be reflected in every thing you say and do. Some other techniques described in this section include activities to do every day to reinforce learning objectives and create continuity; pointers for reading aloud and sharing ideas; and advice on using journals, a tool we find extremely helpful for kids of all ages.

Redfly Creations: The 50-Cent DIY iPad Stand Ever since we purchased a tablet we have been looking for an inexpensive yet sturdy stand. The good ones available on the market cost about $30. On the other hand, inexpensive homemade stands out of legos or pencils and rubber bands are just not sturdy enough. So, we decided to make our own out of wood! This stand is versatile enough that it will fit any generation iPad AND most Android Tablets including Amazon's Kindle Fire and Kindle Fire HD. This design is VERY simple and easy to make. The 33 Most Beautiful Abandoned Places In The World Many people doesn’t know, and didn’t even heard about these famous abandoned places. Many of these places are really something amazing, but they are also really sad when you take a closer look at them. On the folowing list, you can see abandoned planes, abandoned ships, as well as the abandoned houses, and so many other things, that are really amazing and magnificent.

A Book That Shows Every Color Imaginable EmailEmail Regardless if you are a designer or not, having all the existing colors bound in your bookshelf would look quite impressive. A New York-based artist Tauba Auerbach presented a 8 x 8 x 8-inch cube book, that contains the complete RGB color scheme page by page. The binding of the cube was designed by the author herself in collaboration with Daniel E. Ink Tank - Make words not war The ten greatest short story writers of the twenty-first century? What, we scoff, only ten? After all, the century’s fourteen already – that’s enough time to compile a list twice as long as this one!

197 Educational YouTube Channels You Should Know About 197 Educational YouTube Channels You Should Know About If you don’t have a YouTube channel as an education provider, there’s a good chance you’re behind the times. Nearly every major educational institution in the world now hosts its own collection of videos featuring news, lectures, tutorials, and open courseware. Just as many individuals have their own channel, curating their expertise in a series of broadcasted lessons. These channels allow instructors to share information and blend media in unprecedented and exciting new ways. ipad cover tutorial We recently bought a new iPad 2 for work and I was floored at the prices of covers…..I just couldn’t bring myself to spend that much. My husband’s friend Walker jokes that his composition notebook is his “low-tech iPad” because it is exactly the same size…..so it gave me an idea. I would make a cover for our new iPad out of one of the old composition notebooks I had sitting around. Turns out it was pretty easy using the box my iPad came in, some hair elastics and a notebook with the pages removed. Here is how I made an easy, inexpensive iPad cover: