What If Everything You Knew About Disciplining Kids Was Wrong? 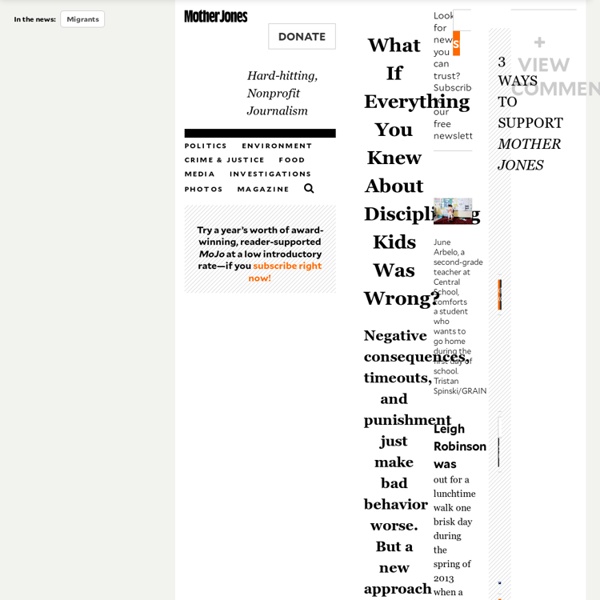 Related:  Patient-centred care • Hard to be a Good Teacher in an INept System

In the patient’s best interests? Who says? Fiona Godlee, editor in chief, The BMJfgodlee{at}bmj.com “For moral autonomy it is more important to make ‘wrong’ choices than to obey instructions,” writes Michael Fitzpatrick in this week’s Head to Head debate (doi:10.1136/bmj.h5654). A ban on smoking in psychiatric hospitals would, he says, cause distress to patients and conflicts with staff. Why Preschool Suspensions Still Happen (And How To Stop Them) : NPR Ed Something's wrong in America's classrooms. According to new data from the Education Department, black students — from kindergarten through high school — are 3.8 times more likely to be suspended than white students. Now the really bad news. This trend begins in preschool, where black children are already 3.6 times more likely to be suspended than white students. In all, 6,743 children who were enrolled in public pre-K received one or more out-of-school suspensions in the 2013-14 school year.

Passive-Aggressive Behavior You are so angry you refuse to act, and no one can ever make you do what you don't want to. This is as violent and destructive as a fist fight but so much more deniable and self-righteous. If you want to look good while doing bad, this is the approach for you, but don't be surprised if you get stuck in a long, painful, and destructive cycle. Definitions: If Patients Only Knew How Often Treatments Could Harm Them Photo If we knew more, would we opt for different kinds and amounts of health care? Despite the existence of metrics to help patients appreciate benefits and harms, a new systematic review suggests that our expectations are not consistent with the facts. Most patients overestimate the benefits of medical treatments, and underestimate the harms; because of that, they use more care. The study, published in JAMA Internal Medicine and written by Tammy Hoffmann and Chris Del Mar, is the first to systematically review the literature on the accuracy of patients’ expectations of benefits and harms of treatment.

Texan who called Obama a gay prostitute wants to control textbooks Mary Lou Bruner (Mary Lou Bruner for State Board of Education) Mary Lou Bruner stood before the Texas State Board of Education in 2010 to talk about textbooks. She was concerned, she said during her testimony, that the state’s curriculum was being controlled by outside forces. Her statements were introduced by board member Lawrence Allen (D): “You believe…people from the Middle East are buying, using their dollars, to persuade textbook publishers to put more —” “I think the Middle Easterners are buying the textbooks!”

7 Signs You've Arrived as a Survivor of Narcissistic Abuse Recovering from narcissistic and emotional abuse can seem like an ordeal of the most grievous kind. You may have endured months of struggle and suffering without knowing if you’re making any progress because the pull to go back remains strong. You miss the moments under your abuser’s sway because, in your traumatized mind, cognitive dissonance and memories of so-called “good times” cloud your objectivity. How do you know where you stand on your road to recovery? Victory isn’t always in-your-face. Origins - Medicine of the Person "Medicine of the Person", or rather, "Médecine de la Personne" is the title of a book published in French in 1940, by Dr Paul Tournier, a general practitioner in Geneva. At a period when psychosomatic medicine was in its infancy, he was struck by the fact that the contemporary approach to illness was purely organic, and failed to consider the patient as a whole, with not only a physical dimension but psychological and spiritual dimensions as well. He invited medical colleagues specialising in a variety of fields and also a number of philosophers to reflect on this with him and organised yearly meetings, which from 1947 onwards were attended by delegates from several countries and became known as "International Meetings of Medicine of the Person".

In Our Schools, Very young Black Lives Matter, Too In Our Schools, Black Lives Matter, Too Students in kindergarten listen to their principal read a book at the International Community School on December 17, 2015 in Decatur, Georgia. The elementary school, a public charter school for grades K-5, has about 400 students from 30 nations speaking 25 languages. ICS was strategically designed in 2002 to bring together refugee, immigrant and local children in an academically challenging and nurturing environment.

Tantrum Tamers: 32 Phrases to Use With 3 and 4 Year-Olds The trick to communicating successfully with three and four year-olds is to be clever, funny, clear, rested, and to have a method to calming yourself down as fast as possible. Children this age are often more aggressive and frustrated than they were as toddlers, so being aware of this and meeting their challenging behaviour with strategies and patience are very helpful for all involved. Stop Tantrums: 33 Phrases to Use With Toddlers In addition to trying the phrases I listed in my previous post for toddlers and the ones below, please remember that children do better with a full attachment tank and the use of positive discipline.

Iora Health pioneers new primary care model BURLINGTON — A year ago, Jeffrey Davis had just about given up on going to the doctor. He was tired of waiting for physicians who always ran late, tired of being rushed through appointments, tired of never having diagnoses or treatment plans fully explained. Then a coworker suggested that Davis, 53, of Haverhill, check out the Iora Health practice in Burlington. There he found the attention, care, and personal interest that was so lacking in his past experiences. Success Academy undercover video shows no-excuses discipline at its ugliest. Dario Cantatore/Getty Images for Tribeca Film Festival Today, the New York Times published undercover video taken at a Success Academy elementary school in Brooklyn that’s part of the controversial charter network known for “no excuses” discipline. It shows a first grade teacher berating and humiliating a girl who stumbles when solving a math problem. The teacher, Charlotte Dial, rips up the student’s paper and barks, “Go to the calm-down chair and sit!,” though by all indications, the girl was already sitting calmly. “You’re confusing everybody,” the teacher says, her voice seething.

What To Do When Your Child Hits You It can be incredibly hard to stay calm when our own children hit us. Both our instinctual physical defense system and intense emotions can get triggered in a flash! I remember the period when one of my children hit me almost every day; I became scared of him, trying to steer clear of where he was. We know that children can feel it when we pull away so although it can feel hard to do, the key to reducing hitting is to connect more with our aggressive child. Here are ten steps to reducing hitting behaviour in your children:

“Informed choice” in a time of too much medicine—no panacea for ethical difficulties Minna Johansson, PhD student1 2, Karsten Juhl Jørgensen, senior researcher3, Linn Getz, professor4, Ray Moynihan, senior research fellow5Author affiliationsCorrespondence to: M Johansson minna.johansson@vgregion.se Providing information to enable informed choices about healthcare sounds immediately appealing to most of us. But Minna Johansson and colleagues argue that preventive medicine and expanding disease definitions have changed the ethical premises of informed choice and our good intentions may inadvertently advance overmedicalisation The idea of informed patients who make reasoned decisions about their treatment based on personal preferences is appealing in a Western cultural context, with its focus on the autonomous individual. Rightly, many doctors now reject paternalism if the patient does not specifically ask for it.

Related:
Related:  Patient-centred care   -  Hard to be a Good Teacher in an INept System