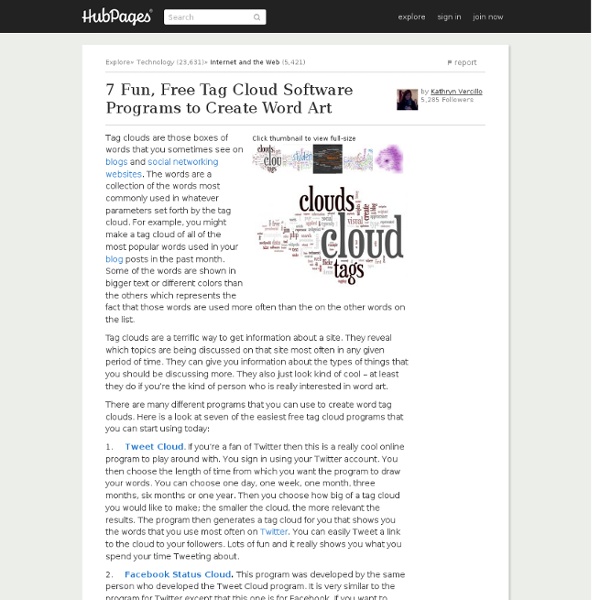 Tag clouds are those boxes of words that you sometimes see on blogs and social networking websites. The words are a collection of the words most commonly used in whatever parameters set forth by the tag cloud. For example, you might make a tag cloud of all of the most popular words used in your blog posts in the past month. Tag clouds are a terrific way to get information about a site. There are many different programs that you can use to create word tag clouds. 1. 2. 3. 4. 5. 6. 7. You can use these seven programs for a variety of different purposes.

Staffordshire Hoard | The largest hoard of Anglo-Saxon gold ever found Appletons' Cyclopædia of American Biography Appletons' Cyclopædia of American Biography (1900, volume 5) Appletons' Cyclopædia of American Biography is a six-volume collection of biographies of notable people involved in the history of the New World. Published between 1887 and 1889, its unsigned articles were widely accepted as authoritative for several decades. Later the encyclopedia became notorious for including dozens of biographies of people who had never existed. Overview[edit] The Cyclopædia included the names of over 20,000 native and adopted citizens of the United States, including living persons. None of the articles are signed either with names or with initials. Fictitious biographies[edit] The writer (or writers) of these articles must have had some scientific training, for most of the creations were scientists, and sufficient linguistic knowledge to have invented or adapted titles in six languages. Precedents[edit] Editions[edit] The Cyclopædia was republished, uncorrected, by the Gale Research Company in 1968.[15] [edit]

History, Travel, Arts, Science, People, Places What is it that makes honey such a special food? Photo via Flickr user Flood G. Modern archeologists, excavating ancient Egyptian tombs, have often found something unexpected amongst the tombs’ artifacts: pots of honey, thousands of years old, and yet still preserved. Through millennia, the archeologists discover, the food remains unspoiled, an unmistakable testament to the eternal shelf-life of honey. There are a few other examples of foods that keep–indefinitely–in their raw state: salt, sugar, dried rice are a few. The answer is as complex as honey’s flavor–you don’t get a food source with no expiration date without a whole slew of factors working in perfect harmony. The first comes from the chemical make-up of honey itself. Honey is also naturally extremely acidic. But honey isn’t the only hygroscopic food source out there. So why does one sugar solution spoil, while another lasts indefinitely? “Bees are magical,” Harris jokes.