Moon Phases and Your Personality 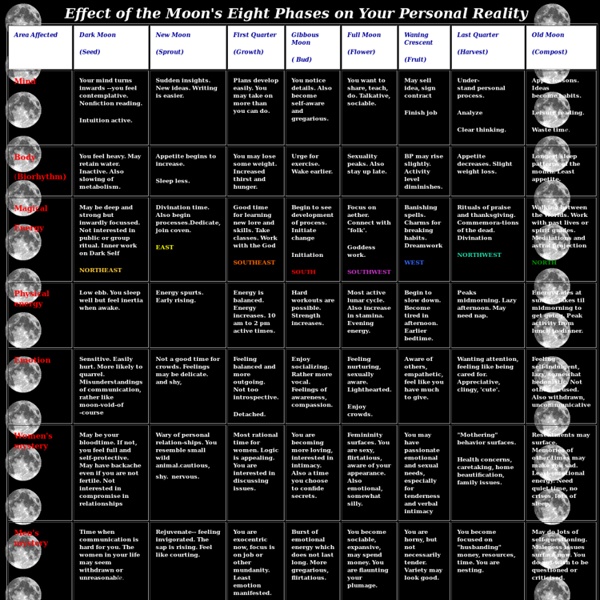 Samhain Patti Wigington is a soccer mom. She is the vice president of her local PTA. And she's a witch. This Saturday while her neighborhood outside Columbus, Ohio, is crawling with costumed witches in search of candy, Wigington and a group of other local witches will not be celebrating Halloween, but the new year festival Samhain, which also occurs Oct. 31. In her backyard, Wigington and six other local women who make up her coven will stand in a circle, each holding a lit candle dedicated to a dead ancestor. When she gets to the part about death, Wigington, a middle-aged mother of three, stops for moment in her explanation of a typical Samhain ritual. "Look," she says, "I know some people are freaked out by death. Wicca is a relatively new religion, which its practitioners say is based on ancient precepts. null But the number of Wiccans remains relatively small to the U.S. population, less than 0.3 percent, according to the Pew Forum for Religion and Public Life.

Wiccan Tools and Materials There is a beauty in cherished objects, much more so if these objects are consecrated for the use in rites and magyc. I call these objects physical metaphors because they are used as a solid representation of a much greater, and often ineffable, reality. A simple stone, for instance, represents solid energy in its most condensed form. The best objects are ones you make yourself with intent and dedication, though no one is suggesting that you build a forge in your back yard. The important thing to remember when selecting your accouterments is the essence of their present form. Aristotle spoke of the Four Causes of objects that bring them into being: Material: That out of which something is made. Maker: The means by which something is made; who made it. Result: That which is made, the thing itself. Purpose: What it is made for. When you need a tool or material consider these four essences and you will not stray far from the representation, the metaphor or symbol, you intend. Classical Celtic

Imbolc (and others) Imbolc The festival of Imbolc, or Bride, is celebrated by Pagans, and also by christians who call it Candlemass. Imbolc is Irish-Gaelic and translates variously as 'in the belly' or 'ewe's milk'. It represents the quickening of light and life. The first stirrings of spring can be seen with the appearance of such plants as snowdrops and winter aconite. Wiccan Sabbats Jack Frost & The Hooded Crow Magick Runes Magick Runes can be used for many things such as divination and/or charms. Magick Runes have been used since ancient times for these and other purposes. Using magick runes as well as other forms of divination will take some time to both understand and used effectively with your magickal workings. Magick runes can be used many ways and can also take many forms. You can buy magick rune cards, make or buy rune stones, and make/buy rune stones. basic information about runes and rune magick, some basic ways to utilize you’re runes, and some general information of the amazing things that can be accomplished with magick runes. The most common use of magick runes would be to draw the rune symbol on a charm or spell slip. You can click to learn how to make magick runes, and afterward click to learn about runescripts. I recommend it for anyone serious about magick runes.

Ostara Many Holidays, Many Names: The word Ostara is just one of the names applied to the celebration of the spring equinox on March 21. The Venerable Bede said the origin of the word is actually from Eostre, a Germanic goddess of spring. A New Day Begins: A dynasty of Persian kings known as the Achaemenians celebrated the spring equinox with the festival of No Ruz -- which means "new day." Mad as a March Hare: Spring equinox is a time for fertility and sowing seeds, and so nature's fertility goes a little crazy. The Legends of Mithras: The story of the Roman god, Mithras, is similar to the tale of Jesus Christ and his resurrection. Spring Celebrations Around the World: In ancient Rome, the followers of Cybele believed that their goddess had a consort who was born via a virgin birth. The indigenous Mayan people in Central American have celebrated a spring equinox festival for ten centuries. According to the Venerable Bede, Eostre was the Saxon version of the Germanic goddess Ostara.

Beltane April's showers have given way to rich and fertile earth, and as the land greens, there are few celebrations as representative of fertility as Beltane. Observed on May 1st (or October 31 - November 1 for our Southern Hemisphere readers), festivities typically begin the evening before, on the last night of April. It's a time to welcome the abundance of the fertile earth, and a day that has a long (and sometimes scandalous) history. Rituals and Ceremonies Depending on your particular tradition, there are many different ways you can celebrate Beltane, but the focus is nearly always on fertility. Here are a few rituals you may want to think about trying -- and remember, any of them can be adapted for either a solitary practitioner or a small group, with just a little planning ahead. Customs and Folklore Interested in learning about some of the traditions behind the celebrations of May Day? Beltane Magic Crafts and Creations Feasting and Food

Litha An Ancient Solar Celebration: Nearly every agricultural society has marked the high point of summer in some way, shape or form. On this date – usually around June 21 or 22 (or December 21/22 in the southern hemisphere) – the sun reaches its zenith in the sky. Traveling the Heavens: Although few primary sources are available detailing the practices of the ancient Celts, some information can be found in the chronicles kept by early Christian monks. Fire and Water: In addition to the polarity between land and sky, Litha is a time to find a balance between fire and water. Saxon Traditions: When they arrived in the British Isles, the Saxon invaders brought with them the tradition of calling the month of June Aerra Litha. Roman Festivals : The Romans, who had a festival for anything and everything, celebrated this time as sacred to Juno, the wife of Jupiter and goddess of women and childbirth. Midsummer for Modern Pagans: This is a time of year of brightness and warmth.

Lammas The Beginning of the Harvest: At Lammas, also called Lughnasadh, the hot days of August are upon us, much of the earth is dry and parched, but we still know that the bright reds and yellows of the harvest season are just around the corner. Apples are beginning to ripen in the trees, our summer vegetables have been picked, corn is tall and green, waiting for us to come gather the bounty of the crop fields. This holiday can be celebrated either as a way to honor the god Lugh, or as a celebration of the harvest. Celebrating Grain in Ancient Cultures: Grain has held a place of importance in civilization back nearly to the beginning of time. In Greek legend, the grain god was Adonis. A Feast of Bread: In early Ireland, it was a bad idea to harvest your grain any time before Lammas -- it meant that the previous year's harvest had run out early, and that was a serious failing in agricultural communities. Honoring Lugh, the Skillful God: Celebrating Lammas Today: Honoring the Past

Mabon Mabon, or Autumn Equinox, is one of the solar festivals on the Wiccan Wheel of the Year. In the Wicca calendar, this festival falls near September 21 in the Northern Hemisphere, and March 21 in the Southern Hemisphere. Equinox means "equal night." As with all spiritual matters, we must ask: "What does this mean, symbolically?" Mabon Books Autumn Equinox Books Wheel of the Year Wiccan Sabbats Mabon: A Celebration of Balance The Equinoxes demonstrate balance, the breathing of life through contraction as well as expansion. Here on Earth, the Light and the Darkness dance together, co-creators. This is what the Energy Field Barometer column talks about this month. At this festival, it is a perfect time to examine how balance is playing out in your life. Are you balancing work with play and rest? This is a good time to fine-tune and aim for balance. How do we achieve balance, or equanimity in times of stress? We can follow the example of the Earth . . . The Joy Of Surrender Letting Go Into Death

A Year of Wiccan Sabbat Rituals As the Wheel of the Year turns and the eight Wiccan Sabbats pass by, many people like to celebrate with special ceremonies and rituals. Learn about the different Sabbats, what they mean, and how you can celebrate with your group or as a solitary practitioner. Samhain Celebrate the Harvest's End. Samhain falls on October 31, and is known as the Witch's New Year. You can celebrate it as the end of the harvest, and honor the return of the King of Winter. Yule Family Yule Log Ritual. Imbolc Honoring Brighid (Group Ritual). Ostara Spring Ritual for Solitaries.

Yule The date varies from December 20 to December 23 depending on the year in the Gregorian calendar. Yule is also known as the winter solstice in the northern hemisphere and the summer solstice in the southern hemisphere due to the seasonal differences. Yule, (pronounced EWE-elle) is when the dark half of the year relinquishes to the light half. Starting the next morning at sunrise, the sun climbs just a little higher and stays a little longer in the sky each day. Bonfires were lit in the fields, and crops and trees were "wassailed" with toasts of spiced cider. The ceremonial Yule log was the highlight of the Solstice festival. A different type of Yule log, and perhaps one more suitable for modern practitioners would be the type that is used as a base to hold three candles. Many customs created around Yule are identified with Christmas today. Deities of Yule: All Newborn Gods, Sun Gods, Mother Goddesses, and Triple Goddesses. Incense of Yule: Pine, cedar, bayberry, cinnamon.

Witchcraft, Wiccan and Pagan Index | Celtic Connection The 7 Keys to Living a Goddess Life | The search for the inner goddess isn’t an ego-centric thing like wanting to be worshipped. It’s more a way to understand your own femininity, strength and wisdom and to give yourself permission to assert these gifts to empower your life. The easiest way to connect with your inner goddess? From personal experience one of the easiest ways to keep your inner goddess glowing is to keep balanced chakras – the energy centres in the body that perform important physiological and psychological functions. I use a range of tools in my Goddess For Life coaching sessions that inspire key elements of a balanced life: foundation, passion, vitality, connection, expression, trust and wisdom. These are all attributes of the major chakras and are a key to achieving a state of bliss. Foundation Your base chakra forms your foundation – it is related to survival instincts, your sense of grounding and connection of your body and the earth. Passion Vitality Connection Expression Trust Wisdom