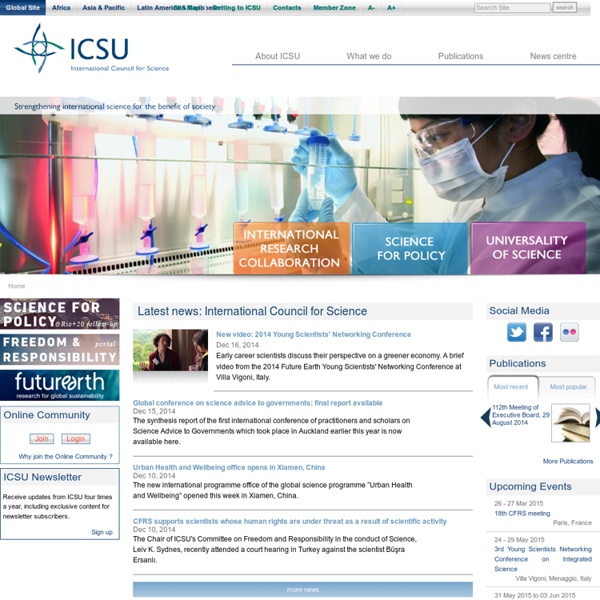 International Human Dimensions Programme The International Human Dimensions Programme on Global Environmental Change (IHDP) is a research programme that studies the human and societal aspects of the phenomenon of global change. IHDP aims to frame, develop and integrate social science research on global change, and promote the application of its key findings. It strives to develop research approaches that put societies at the center of the debate, looking at current global environmental problems as social and societal challenges.[1] IHDP’s work brings together groups of multi-disciplinary and multi-national researchers to work on long-term collaborative science. IHDP research is conducted by its ten projects.[2] Its six core projects, focus on how humans affect and are affected by climate change, with specific topics including human security, urbanization, industrial transformation and environmental governance as they relate to global change. History[edit] Secretariat[edit] Earth System Science Partnership (ESSP)[edit]

International Social Science Council » Advancing the social sciences World-systems theory A world map of countries by trading status, late 20th century, using the world system differentiation into core countries (blue), semi-periphery countries (purple) and periphery countries (red). Based on the list in Dunn, Kawana, Brewer (2000). World-systems theory (also known as world-systems analysis or the world-systems perspective),[1] a multidisciplinary, macro-scale approach to world history and social change, emphasizes the world-system (and not nation states) as the primary (but not exclusive) unit of social analysis.[1][2] Background[edit] Immanuel Wallerstein has developed the best-known version of world-systems analysis, beginning in the 1970s.[4][5] Wallerstein traces the rise of the capitalist world-economy from the "long" sixteenth century (c. 1450-1640). Many other scholars have contributed significant work in this "knowledge movement".[2] Origins[edit] Influences and major thinkers[edit] World-systems theory was aiming to replace modernization theory. Dependency theory[edit]

United Nations University Home Antonio Busalacchi Professor and Director From the polar ice caps to the deserts of China, from the skies over Oklahoma to the Atlantic Ocean near Northeast Brazil, ESSIC scientists are busy examining the Earth's Systems through the various lenses of their particular specialties. Cutting across the traditional disciplinary boundaries of meteorology, oceanography, geology and geography, ESSIC seeks to better understand how the land, the oceans and the atmosphere react with, and influence, one another. These interrelationships profoundly affect the current and future health and welfare of our planet and all its inhabitants. At ESSIC, some of the questions our researchers are exploring are: How do the ocean, atmosphere, and land surfaces interact to induce changes in climate?

Call for expression of interest to host permanent secretariat of Future Earth - IHDP Interested parties are invited in this first stage of a three-step process to express their interest in hosting the permanent secretariat for Future Earth by 23 September. The Science and Technology Alliance for Global Sustainability is launching an open competitive process for the selection of a permanent secretariat for Future Earth, a 10-year international research programme dedicated to generating new knowledge for challenges posed by global environmental change and transitions towards global sustainability. The call is being managed by the International Council for Science (ICSU). The successful bid will host a permanent secretariat – which should comprise a headquarters and regional nodes – for the 10-year research programme. Interested parties (whether individual organisations or consortia of organisations) are invited at this stage to express their interest by reviewing the briefing document and completing a template.

Earth system science Earth system science seeks to integrate various fields of academic study to understand the Earth as a system. It considers interaction between the atmosphere, hydrosphere, lithosphere (geosphere), biosphere,[1] and heliosphere.[2] In 1996, the American Geophysical Union, in cooperation with the Keck Geology Consortium and with support from five divisions within the National Science Foundation, convened a workshop "to define common educational goals among all disciplines in the Earth sciences." In its report, participants noted that, "The fields that make up the Earth and space sciences are currently undergoing a major advancement that promotes understanding the Earth as a number of interrelated systems." Recognizing the rise of this systems approach, the workshop report recommended that an Earth system science curriculum be developed with support from the National Science Foundation.[3] Definition[edit] Inspiration in the Gaia theory[edit] The programmes have stated the following:

Future Earth announces its Science Committee - IHDP The new Future Earth initiative has just announced its Science Committee, comprising of 16 members and two co-chairs. The group represents the full spectrum of global environmental change science from natural science to social sciences, humanities, and engineering. As one of two advisory bodies to the Governing Council, the committee will provide scientific guidance, ensure scientific quality, and guide the development of new projects. It will oversee the transition of IGBP, IHDP and Diversitas activities into Future Earth, secure strong partnership with the WCRP community. Chair of the Science Committee is Dr Mark Stafford Smith who holds the post of Science Director of CSIRO’s Climate Adaptation Flagship in Canberra, Australia, where he oversees a highly interdisciplinary programme of research on many aspects of adapting to climate change. Further members of the Science Committee: Eduardo S. Jane Lubchenco, Valley Professor of Marine Biology at Oregon State University, United States