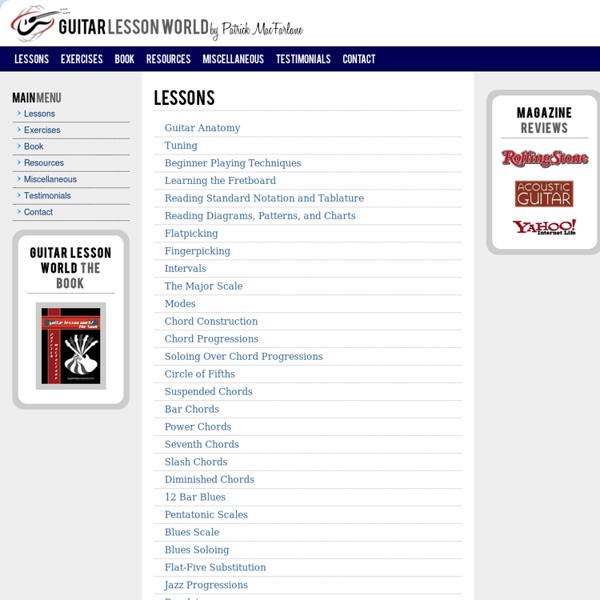 Play The 7 Modes in 7 Days (Tabs Incl.) Photo by Marta Monleón Modes are used in all kinds of musical styles like Jazz, Rock, Metal, Flamenco, etc. They create a certain mood or feel to your playing. If you feel like you are stuck playing solos using just Major/Minor or Pentatonic/Blues scales all the time, you’re ready to call on the modes and dive a little deeper. When I first got introduced to modes I was a little bit overwhelmed, but also excited to explore this whole new world of boundless possibilities. I soon realized it’s all about the journey and not the destination, so enjoy the process! There are 7 modes which can be derived from the major scale: 1 – Ionian 2 – Dorian 3 – Phrygian 4 – Lydian 5 – Mixolydian 6 – Aeolian 7 – Locrian Each mode starts and stops on a different note within the major scale. In this post we take the C major scale to explain the modes, but you can derive the 7 modes from any major scale in any key. I challenge you to understand the basics and work your way through each mode in 7 days.

www.guitarhabits Photo by Jsome1 Playing 3 notes per string exercises is something I do on a regular basis. I use them to warm up, to become a faster guitar player and to spice up my improvisation. 3 notes per string licks and scales are generally used for speed picking. If you practice these exercises properly and often enough you will increase your speed. The 3 notes per string exercises are played using the alternate picking technique. Once you get the hang of it, it can become quite addictive, but be careful though. The one and only reason why these monster guitar players become so incredibly fast is that they practice long hours for days, weeks, months and years.

10 Essentials On Guitar Improvisation Photo by Simone13 AKA John Pastorello Besides writing and playing songs I just love improvising. When I practice improvising I always first pour myself a cup of green tea, I put on some folk music (e.g. Ray La Montagne, Damien Rice, Stephen Fretwell, Glen Hansard, Sheryl Crow, etc.) on Last.fm or Spotify.com and then I start to improvise over these songs. I get totally caught up in the moment and let my fingers carry me away. Other times I practice melodic patterns, triads, arpeggios, licks, everything that will spice up my improvisation skills. Improvising is one of the most fun and fulfilling aspects of guitar playing, but also something that requires a lot of hard work and dedication. Here are 10 basic essentials that will help you become a better improviser. 1 – Pentatonics / blues Learn to play the pentatonic/blues scale all over the neck in all five shapes. 2 – Major Scale Next to the pentatonic scale, the major scale is the most important scale to learn. 3- Melodic patterns Example:

Free VST Plugins! Are you looking for high quality VST plugins which you can download and use for free? You’re certainly in the right place! On this page, you’ll find the core part of BPB – a constantly updated directory of essential freeware VST instruments and effects for Windows and Mac (formerly known as BPB Freeware Studio). Welcome and enjoy your stay! Alternatively, you can browse through all the freeware tools (including freeware plugins, host applications, free audio editors, etc.) which have been featured in our News section so far, by visiting the Free Software Archive on BPB. The archive features all the software tools which were featured on BPB, ever since the launch back in 2009! Two years ago, we started a series of articles covering the best freeware plugin releases from each year. Scroll below to see our directory of the finest free music making software. Free VST Plugin Directory Part 1: Best Free VST Host Applications Part 2: Best Freeware VST Effects Part 3: Best Freeware VST Instruments

Thinking inside the Box: a complete EQ tutorial - dnbscene.com ContentsThis article was originally written and published on dnbscene.com in 2003. Part One: Intro To begin: an anecdote. I started making music with Impulse Tracker. After a few years of gaining decidedly unprofessional results with that, I moved onto Buzz. Yippee! Slowly I came to realise the problem. EQ and compression are simply the two most important tools in music production. Think of it this way. My mistake - and, I think, the mistake made by many learning producers - was to be tempted by the more exciting task of choosing the colour schemes and leather sofas, when my walls could be knocked down by a sneeze and my roof was made of paper. Hence this tutorial. Now I could simply do a lightning quick tutorial on compression - I could say, for example, "for basslines it's best to compress at a ratio of 3:1, threshold -6db" or whatever (that's a totally fictional example by the way). My central concept is that producers in the digital domain are effectively working inside a box.

Guitar Chords Magic | Free Guitar Chords | Guitar Chord Charts SacredGeometryOfMusic The Sacred Geometry Of Music by Andrew Lorimer Music uses the laws of vibration to manifest aurally what exists at the center of everything. Into our reality springs a non-visual harmonic law that is universal. The notes and intervals of music speak directly to the chakra centers and causes them to vibrate in harmony to the vibration of a string or vocal chords, speakers moving through the air, or the sound of someone’s lips making a farting noise through a metal tube. Music uses the laws of physics and mathematics to bring out an emotional response in the listener. The music of the Western world uses a mathematical system based on Twelve. Clock Harmonisphere The mathematics of the harmonisphere are amazing. When we measure the same chords on the harmonisphere, the seven chords have the same mirrored combinations as the piano:

The Aesthetics of Popular Music Popular music is widely assumed to be different in kind from the serious music or art music that, until very recently, monopolized attention in philosophical discussions of music. In recent years, however, popular music has become an important topic for philosophers pursuing either of two projects. First, popular music receives attention from philosophers who see it as a test case for prevailing philosophies of music. Even now, most philosophy of music concentrates on the European classical repertoire. Therefore, if there are important differences between popular and art music, widening the discussion to include popular music might encourage us to reconsider the nature of music. Second, popular music increasingly serves as a focal point in general debates about art and aesthetic value. Among the topics that have benefited from this reconsideration are the nature of music’s aesthetic value, music’s claim to autonomy, and the ontology of music. Table of Contents 1. 2. 3.

- Tracking : Resource Library and More Information Look here for articles on applied recording techniques and mic placement. It all starts here! Acoustic Guitar Tracking the acoustic guitar is a huge subject, because so much contributes to the final sound—player, instrument, room acoustics, mic choice and placement, effects, and more. Here are some timeless articles with solid advice to get you started on developing your own acoustic recording toolbox. Electric Guitar The electric guitar is the central sound of rock music, and has influenced everything from blues and country to electronica. Bass Recording the bass can be as straightforward as a simple DI to the console or as complex as multiple mics on an acoustic bass fiddle or giant amp stack. Other Guitars The archtop, the dobro, the parlor guitar, the pedal steel—scary to the newcomer, each with its own challenges. Drums & Percussion Miking drums is an art form. Vocals The human voice is the most recognizable sound to the human brain. Horns & Woodwinds Piano Strings Psychology & Coaching

7th Chords on the piano - Week Ten - One of the most valuable chord types you'll ever learn... Hello again, and welcome to the next edition of the newsletter. I hope you are enjoying learning about all the chords in the world -- and we're going to cover them ALL before we're done -- you'll know more about chords than 99% of the people in the world -- believe it or not, it's true. If you recall the first week we learned about the three chords you absolutely, positively CAN'T do without. Then in the next weeks lesson we showed you how easy it is to learn ALL the major chords (there are 12 of them) and be able to play them in seconds -- not hours or days or weeks or months or years. Next you learned how to easily turn major chords into minor chords just by moving one key one-half step -- by lowering the 3rd of the major chord. Then we learned diminished triads -- just by lowering the 3rd and the 5th of a major chord 1/2 step. Then we learned inversions -- how to stand chords on their head.