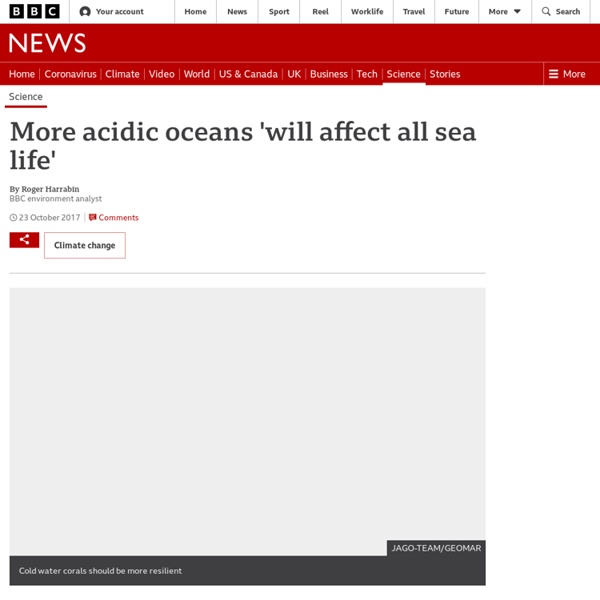 Image copyright JAGO-TEAM/GEOMAR All sea life will be affected because carbon dioxide emissions from modern society are making the oceans more acidic, a major new report will say. The eight-year study from more than 250 scientists finds that infant sea creatures will be especially harmed. This means the number of baby cod growing to adulthood could fall to a quarter or even a 12th of today's numbers, the researchers suggest. The assessment comes from the BIOACID project, which is led from Germany. A brochure summarising the main outcomes will be presented to climate negotiators at their annual meeting, which this year is taking place in Bonn in November. The Biological Impacts of Ocean Acidification report authors say some creatures may benefit directly from the chemical changes - but even these could still be adversely affected indirectly by shifts in the whole food web. Image copyright Maike Nicolai/GEOMAR "Warm-water corals are generally more sensitive than cold-water corals.

Taking Notes By Hand May Be Better Than Digitally, Researchers Say Laptops are common in lecture halls worldwide. Students hear a lecture at the Johann Wolfang Goethe-University on Oct. 13, 2014, in Frankfurt am Main, Germany. Thomas Lohnes/Getty Images hide caption toggle caption Thomas Lohnes/Getty Images The 2018 Midterms and the Specter of Voter Suppression Read: The ‘hubris’ of the Supreme Court’s voting-rights ruling On Saturday, President Donald Trump ensured that the issue would be front and center as Election Day approached. “All levels of government and Law Enforcement are watching carefully for VOTER FRAUD, including during EARLY VOTING,” he tweeted.

6 Trees Every Survivalist Should Know & Why – Now is a good time to go out and flag the following six trees before the leaves drop (except the pine). Revisit them in the winter and learn how to ID them by the bark alone. Then again in the Spring with the buds and new leaves. White birch is easy to identify with its distinctive, white, papery bark. The Best Emergency Preparedness Supplies for 2019: Reviews by Wirecutter The key tools to have on hand for an emergency—everything from an atlas to good duct tape—are also key tools to have on hand for life in general. A common theme that we noticed in this category is that while a great tool can be a genuine joy to use and serve you well for years (if not decades), cheap imitators will waste both your money and your time. Go for the good stuff. —KT Gas shut-off tool

Growing Up Surrounded by Books Has a Lasting Positive Effect on the Brain, Says a New Scientific Study Image by George Redgrave, via Flickr Commons Somewhere in the annals of the internet--if this sprawling, near-sentient thing we call the internet actually has annals--there is a fine, fine quote by filmmaker John Waters: We need to make books cool again. If you go home with somebody and they don’t have books, don’t fuck them. Don’t let them explore you until they’ve explored the secret universes of books. The 9 Rarest Plants in the World We've all heard about the most endangered animals. Creatures like the critically endangered black rhinoceros are famous, and in some cases have been reduced to just a handful of individuals. But what are the most endangered plants? They might not be as exciting or loveable as animals, but they are just as important to the ecosystem – and humanity relies on that ecosystem.

2nd Grade Students Cover Their Teacher’s Dress In Drawings, And Her Story Takes Over The Internet Sometimes arming a bunch of 8-year-olds with paint and markers doesn’t have to result in a disaster. In fact, it can turn into a beautiful work of art! This is exactly what happened to Haley Curfman, a 2nd-grade teacher in Blackwell, Oklahoma. How Native American tribes are bringing back the bison from brink of extinction On 5,000 hectares of unploughed prairie in north-eastern Montana, hundreds of wild bison roam once again. But this herd is not in a national park or a protected sanctuary – they are on tribal lands. Belonging to the Assiniboine and Sioux tribes of Fort Peck Reservation, the 340 bison is the largest conservation herd in the ongoing bison restoration efforts by North America’s Indigenous people. The bison – or as Native Americans call them, buffalo – are not just “sustenance,” according to Leroy Little Bear, a professor at the University of Lethbridge and a leader in the bison restoration efforts with the Blood Tribe.

List of superlative trees Wikimedia list article The world's superlative trees can be ranked by any factor. Records have been kept for trees with superlative height, trunk diameter or girth, canopy coverage, airspace volume, wood volume, estimated mass, and age. COVID Underdogs: Mongolia - Indi Samarajiva - Medium The best COVID-19 response in the world Mongolia has had the best COVID-19 response in the world. Not only do they have zero deaths, they have zero local transmissions. Mongolia didn’t flatten the curve or crush the curve — they were just like ‘fuck curves’. In Mongolia, there simply wasn't an epidemic at all. And no, they didn’t just get lucky.