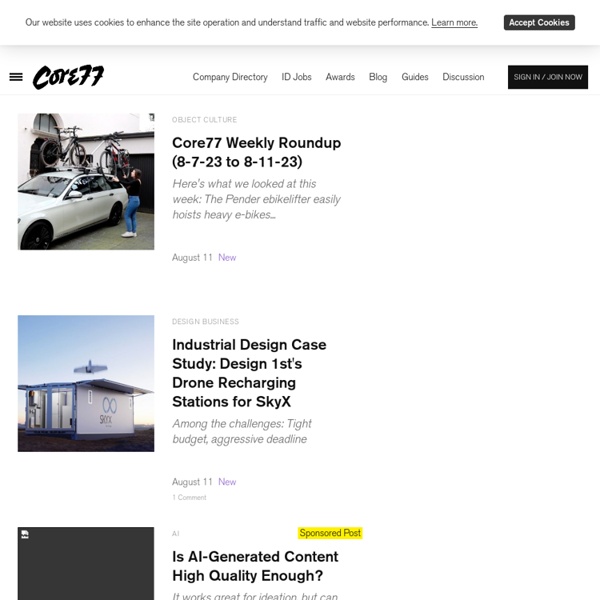 The Best of Bankside at London Design Festival 2015 South of the Thames, 'Bankside' is LDF's newest design district, and home to the iconic Oxo Tower Wharf, which is filled year-round with over 30 independent retail design studios, exhibition spaces and shops offering furniture, jewellery, homeware, and fashion. In its 18th edition this year, Designersblock was situated in the derelict but beautiful Bargehouse, showing multidisciplinary work from over 100 independent designers over three floors. Designersblock at Oxo Tower Wharf. The Kirigram collection by Constanze Schweda.

What Does Boredom Do to Us—and for Us? Historically, the diagnosis of boredom has contained an element of social critique—often of life under capitalism. The Frankfurt School philosopher Theodor Adorno argued that leisure is fundamentally shaped by “the social totality”—and is “shackled” to work, its supposed opposite: “Boredom is a function of life which is lived under the compulsion to work, and under the strict division of labor.” So-called free time—obligatory hobbies and holidays that reconcile us to the capitalist economy’s coldly regimented workday—is really a sign of our unfreedom. Architecture Spectacular scenery – and sheep – are the first things that come to mind for most of us when we think of New Zealand. For an architect, spectacular scenery is always both a challenge and an opportunity. This was very much the situation for David Ponting, founder of Ponting Fitzgerald (in 1998) of Ponsonby, Auckland, New Zealand, when he saw the site for what his affluent client hoped would be a “sanctuary.”

We The Urban MUSIC: A$AP Rocky Debuts New Song @ Coachella 2014 The first day of this year’s Coachella Music & Arts Festival is a wrap, so expect numerous live sets to be posted on our site within the next few hours and days. Read More MUSIC: Michael Jackson - Xscape The wait is over! büro uebele // news woman, man a woman and a man. standing calm and still, wearing a knee-length dress and shorts. no specific fashion is discernible. these two figures have fallen out of time. yet they aren’t hermaphrodites – who’ve always missed out when the sexual categories are defined: we can see from the two figures that the man is probably a boy, the woman probably a girl. it’s not just that they’re almost exactly the same height: the female figure’s undeveloped chest, the shorts – which tend to be the preserve of the young – are sympathetic references to the un-sexual. a shared naïveté – or perhaps rather a shared innocence – overlays the stark division of the sexes. the form fulfils its function and reminds us of childhood. the figures aid wayfinding and tell us a tale of rediscovering a lost age. picture language plädoyer für die maßlosigkeit: mehr ist mehr!

Bikinis Made from 3-D Printers Custom Fit Every Curve Despite being of the male persuasion, even I know that bikini season is no day at the beach. Finding the right fit in a style and cut that threads the needle of decency is enough to make any woman throw up her hands and opt for a one-piece with shorts. Well ladies, Jenna Fizel and Mary Haung of Continuum Fashion have heard your dressing room distress calls. In search of the elusive 'perfect fit,' they've designed the N12 bikini, the world's first 3-D printed two-piece made of small nylon discs held together by thread-like springs. The N12 gets its name from the material it's made of: Nylon 12. Gear Generator Animation: * Shift + Enter: Set RPM of the selected gear #0 - N8 - ratio: 1:1 - RPM: 6#1 - N20 - ratio: 2.5:1 - RPM: 2.4

Dream Homes In designing the project, NY-based architecture firm GRADE responded to two disparate conditions of the site: the expansive views of Chesapeake Bay and the mystic wooded area on which it resided. The objective was to reconcile the client’s need for a studio in which to design and create while not rendering the space hermetic and closed off to its surroundings. GRADE brought nature’s elements indoors, establishing a foundation of earthy textures including natural mahogany wood and a curved zinc rooftop, complemented by imported materials such as Italian marble. Through thoughtful design, the house became an apparatus for filtering the views of the water, with the curved roof allowing the scale of the beachside room to expand the closer one’s proximity to the bay.

I are Steven So in the printing world there is always a debate on whether to use compatible or original printer inkjet cartridges. So what are they? Original inkjet cartridges are the branded ink such as HP and a compatible is a generic replica of the same ink cartridge. Compatible ink cartridges are much more affordable and usually contain more ink than an original printer cartridge. The problem is there are good and bad compatibles. all about visual art Desktop Calendar – January 2014 2014 begins and we are starting the fourth round of our desktop calendar series. We are looking forward to a successful New Year and wish you all the best. If you want this wallpaper at your desktop feel free to download in different resolutions or tell us if you need something else. [...] Dezember 31, 2013Toni PolkowskiDesign, Photography, Wallpaper

10 Futuristic Materials Lifeboat Foundation Safeguarding Humanity Skip to content Switch to White Special Report Scientists Have Found Out When You Really Become An Adult (And It's A Lot Older Than You Think) What makes an adult an adult? Is there a pre-defined age? Say, when you turn 18 and are officially "legal".

Modative Modative Interview by Business of Architecture Posted by Derek Leavitt on Tue, Apr 15, 2014 @ 08:05 AM Last year we had the pleasure of having Enoch Sears from the Business of Architecture visit our office and conduct an on-camera interview. We've always really appreciated Enoch's approach of focusing on the business side of architecture, something that has been a vital part of our practice. So, last week, Enoch published the interview on his website and we are very happy with the results. The Design Ark Striving for Perfection by Kelly Reemsten. (via The Inspiration Grid) Nacion branding by Anagrama who are consistently brilliant. Previously here and here. Nacion is a multi-purpose real-estate development project located in Monterrey, Mexico.