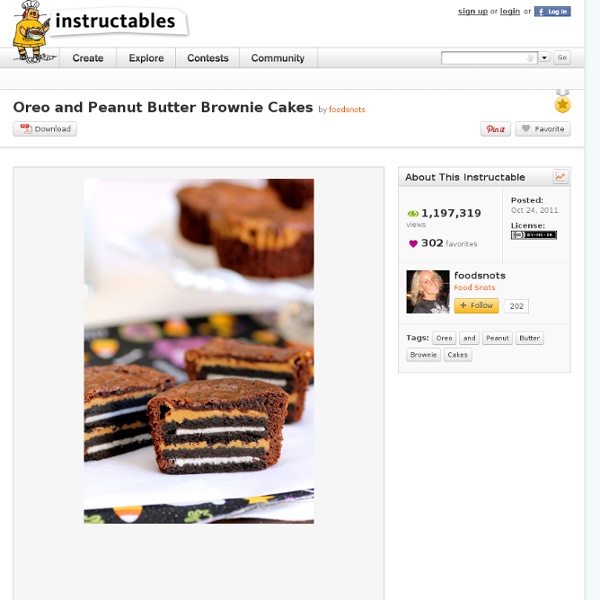 So, after being gone all last week, this has been catch up on the house week. Mostly laundry actually. Man, who knew that a weeks worth of laundry from 5 people could be so daunting. Yikes!! But I am kind of behind on my cooking and baking as well since I've been gone and cleaning. Not to mention, I needed an Oreo fix! Oreo and Peanut Butter Brownie Cakes 1 box brownie mix, 8x8 inch size 24 Oreo Cookies 1/2 cup creamy peanut butter Preheat oven to 350 degrees and line a 12 muffin cup baker with paper liners. Prepare brownie mix according to package directions. Makes 12 servings Recipe from picky-palate.com foodsnots.com

Cinnamon Sugar Pull-Apart Bread I’m sorry. I know it’s Monday morning and you probably came here for some pretty pictures of food that you could glance at, and then move on with your day… and here I go thrusting warm, soft cinnamon sugar bread in your face. It’s not fair. I know it’s not fair. I know that now you’re craving cinnamon rolls, and cream cheese frosting and chili fries and hot dogs. Cinnamon Toast Rolls The USDA released its new food pyramid the other day (which is actually a plate now instead of a pyramid), and I am sorely disappointed to report that cinnamon rolls did not appear anywhere on that plate. I think by now most of us know what should be on our dinner plate in terms of healthy, well-rounded nutrient-laden meals, but it is my considered opinion that our breakfast plate should include cinnamon rolls now and then. And not just any cinnamon roll, mind you, but how ‘bout a homemade cinnamon roll hybrid that is a cross between a cinnamon roll and cinnamon toast, is super easy to make and gosh darn delicious. In honor of their ancestry, I call these little gems cinnamon toast rolls, and here’s all you need to make them… Yep. That’s it… some soft white bread, some butter and some cinnamon sugar.

Make Your Own Rock Candy Throughout my scholarly career, there were two things I was never any good at. Science and art. Fine, three things. I was horrific when it came to all things math, too. Avocado Mac and Cheese Recipe My avocado obsession continues, this time with Stovetop Avocado Mac and Cheese! If you like our Creamy Avocado Pasta, you will love this decadent macaroni and cheese. It is basically the same delicious pasta, but kicked up a notch. Josh thought I was a little looney when I told him what we were having for dinner, but after one bite, he was in mac and cheese heaven. If you are an avocado lover, you will go crazy for this macaroni and cheese! This avocado macaroni and cheese is so easy to make.

Martha Stewart's Black Forest Cupcakes, Pastry Cream, Kirsch Cherries Posted by Grace Massa Langlois on Friday, 2nd July 2010 Happy Belated Canada Day and Happy Early 4th of July everyone! The Canada Day celebrations were in full force yesterday. There were quite a few firework displays happening in the city. I didn’t have to go too far, I had the perfect view from my backyard.

Pepperoni Pizza Monkey Bread How do you make bread even better? You stuff it with pepperoni and cheese. Then, you bake it in a bundt pan that allows you to pull off little chunks and dip them in pizza sauce. This is the perfect thing to bring to a party (and I did, where it disappeared quickly!) or to eat during a football game. Or, make it for dinner and serve with a salad.

Ginger Zucchini Cupcakes with an Orange-Spiced Cream Cheese Frosting If you’re anything like me, right around this time of year you begin to get the Autumn itch. The nights are slowly evolving into a cool calm, the scent of the outside air begins to change, and the anticipation for the fall festivities ahead has you wound up with total excitement! What better way to transition into the best time of year, than to unite the two worlds of summer and spice in this delicious cupcake.

Death By Oreo Cupcakes They are probably the best Oreo cakes I have ever tried. A lot of cake's that I have experimented with before are like a vanilla cake with bits of Oreo in them, which didn't really give them enough Oreo flavor. But these were a lot better. I used a dark chocolate fudge cake mix instead of just a regular chocolate cake mix, which went really well with the cookies and gave the cakes just a little more flavor.

Virginia Willis' Cola-glazed Wings Image Credit: Jaden Hair This is a recipe that I return to time and time again -- it's a friends and family favorite, and the entire plate gets devoured every time. That makes me a happy cook! Instead of deep frying wings (though I love that, too), it's more convenient to bake or grill them. I'm always perplexed on what to do with a big vat of oil after deep frying. Grilling the wings gives them a nicely charred flavor and crisp bits that will delight any barbecue lover.

Chuckwagon Apple Fritters I’ve been thinking about the Good Humor truck a lot lately. Like, a lot. This happens to me almost every summer. I get super hot. - StumbleUpon Posted by admin on Aug 19, 2012 in Food Preparation | 211 comments In case you are not skilled with the food recipes and preparation, listed bellow are some of the easy food tips to make your meals delicious easy way. No matter you prepare breakfast, dinner or just a snack, the easy food tips are here to make your food even more attractive and awesome. Idea by Janice Kamide