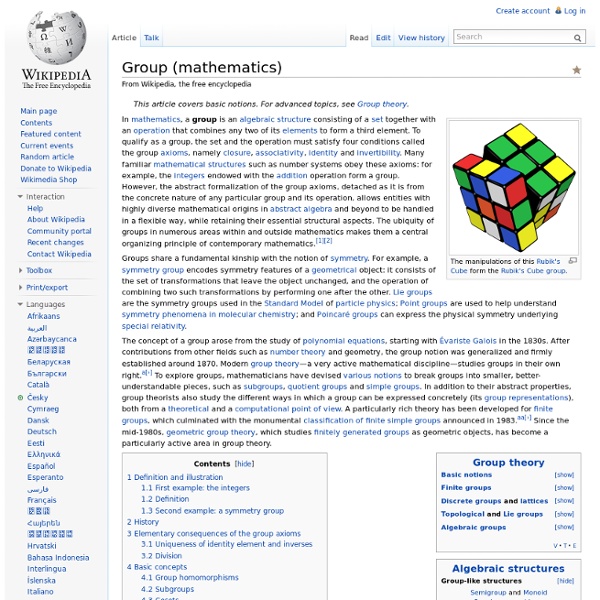 Groups share a fundamental kinship with the notion of symmetry. For example, a symmetry group encodes symmetry features of a geometrical object: the group consists of the set of transformations that leave the object unchanged and the operation of combining two such transformations by performing one after the other. Lie groups are the symmetry groups used in the Standard Model of particle physics; Point groups are used to help understand symmetry phenomena in molecular chemistry; and Poincaré groups can express the physical symmetry underlying special relativity. One of the most familiar groups is the set of integers Z which consists of the numbers ..., −4, −3, −2, −1, 0, 1, 2, 3, 4, ...,[3] together with addition. The following properties of integer addition serve as a model for the abstract group axioms given in the definition below. The integers, together with the operation +, form a mathematical object belonging to a broad class sharing similar structural aspects. Closure Associativity

History of group theory Early 19th century[edit] The earliest study of groups as such probably goes back to the work of Lagrange in the late 18th century. However, this work was somewhat isolated, and 1846 publications of Cauchy and Galois are more commonly referred to as the beginning of group theory. The theory did not develop in a vacuum, and so 3 important threads in its pre-history are developed here. Development of permutation groups[edit] One foundational root of group theory was the quest of solutions of polynomial equations of degree higher than 4. An early source occurs in the problem of forming an equation of degree m having as its roots m of the roots of a given equation of degree n > m. A common foundation for the theory of equations on the basis of the group of permutations was found by mathematician Lagrange (1770, 1771), and on this was built the theory of substitutions. Ruffini (1799) attempted a proof of the impossibility of solving the quintic and higher equations. Felix Klein Sophus Lie