Games and mods development for Windows, Linux and Mac 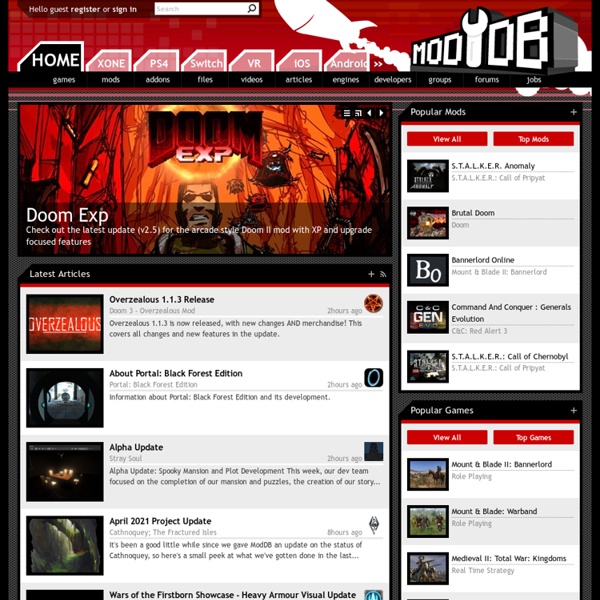 Brandon Kidwell's Blog - GDotD - COLOR BLINDNESS IN GAMING The following blog post, unless otherwise noted, was written by a member of Gamasutra’s community. The thoughts and opinions expressed are those of the writer and not Gamasutra or its parent company. Color Blindness In Games Did you know that majority of games, especially competitive games do not support color blindness? Only recently have game developers begun to incorporate or update their colors in games to help those who are colorblind. NHL04 Rebuilt 2014 Yes we know Ernest... most of us own consoles and many NG hockey games. I have them all (save NHL 2k9 and the newest NHL 10 from EA). I admit it might sound weird for people who have been brainwashed to "newest is always better", or "play it for a year and throw it away" mentality. That's pretty much how the gaming communities have always behaved. I always thought this game is the "million monkeys thing" for EA... they actually made a superb PC sports simulation for once (well, MVP 2005 is another). Who forces you to play and modify the newest one anyway?

Indie Resources On the 30th July 2014 the site got updated, restrutured and redesigned… however the update is still not finished and thus this new Indie Resources overview page is partly incomplete. In case you are missing something you can still check out the outdated old Indie Resources page until the update is complete. Thank you for your understanding. (Game Making Tools, Game Design, Postmortems, Programming, Project Management…) (Create/Download Graphics, Hire Graphic Designer…) (Create/Download Sound + Music, Hire Sound Designer/Musician/Voice Actor…) UCreative.com - Design Exercises To Get Your Creative Juices Flowing The creative mind is like the human body. Creativity by Alex Norris Creativity is something that should be trained everyday, or else it would get out of shape. Thus, doing some creativity exercises would ensure that your brain remains sharp enough for you to do your projects effectively. Aside from that, it’s inevitable that you will run into a creative block where it would seem that your fountain of creativity has run out.

Amit’s Game Programming Information What’s on this page? I’m interested in producing complexity out of simple parts. This page contains bookmarks that I collected while working on games; I did not write most of the content linked from here. As a result the set of links here reflects the types of things I needed to know: only a few specific topics (not everything related to game programming), general ideas instead of platform-specific information (graphics, sound, compilers), and ideas and designs instead of source code (I find it easier to go from an idea to code than from code to an idea). Other sites, like Gamedev Tuts+, Gamedev, and Gamasutra, cover lots more topics than mine does. Determining how to move around on a map is an interesting problem.

The best engines for making your own visual novel This story was originally published in February of 2018. We're republishing it today in case you find yourself with some time on your hands and a need to be creative. Visual novels, while accessible in terms of ease of play, can be a frustrating thing to create. You plot out your narrative, chart all your dialogue, create memorable characters and then when it’s time to tie it all together and transform it into a viable, player-ready videogame, your project can come to a screeching halt.