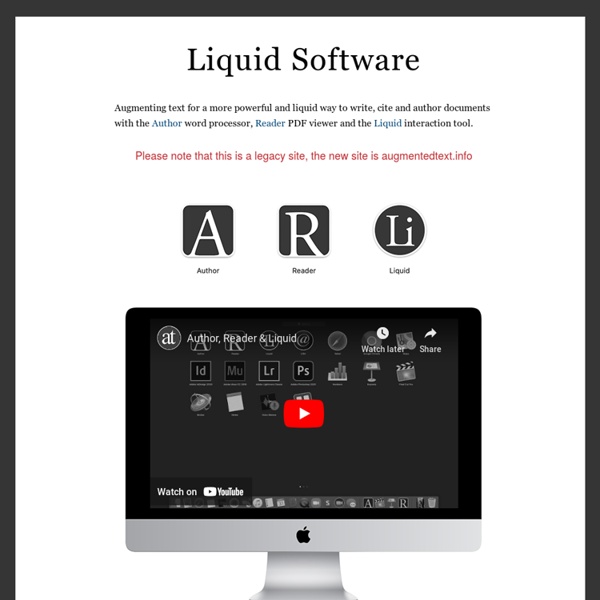 In detail: Doing the keyboard shortcut for Liquid (by default cmd-shift-2 but it's entirely customizable) produces the Liquid interface, a control bar, as shown in the video above. You can now click on menu items, or for more speed, as shown in step 3 above, use the keyboard shortcuts which you can see next to the commands. For example next to References you'll see (R) and once 'r' is activated you can do (W) which is the shortcut for Wikipedia, as shown to the right of Wikipedia. This takes just one second for an even moderately familiar user compared to the usual 10 seconds. Is this really a big difference? In reality it feels like the difference between playing a modern computer game on a high spec computer, versus stumbling along with lag and this is the difference between being in flow and being frustrated, except with text on your Mac you don't know how frustrating it feels without Liquid since you haven't tried it with Liquid yet.

As We May Think - Vannevar Bush As Director of the Office of Scientific Research and Development, Dr. Vannevar Bush has coordinated the activities of some six thousand leading American scientists in the application of science to warfare. In this significant article he holds up an incentive for scientists when the fighting has ceased. He urges that men of science should then turn to the massive task of making more accessible our bewildering store of knowledge.

LeWeb: Stribe’s plug and play social networks – with a differenc [FRANCE/US] Stribe is a plug and play service to instantly create a social network on any website — not unlike competitors Ning, socialthing and meebo. It was founded in March 2008 by Kamel Zeroual, Gaël Delalleau and Demba Diallo, who launched Stribe at TechCrunch50 in September this year. Watch Stribe’s pitch at 00:17:40 The B2B offer is simple — site administrators can copy and paste a bit of javascript, and hey presto, they have a customizable, freely branded social network for their sites accessed via a small footprint toolbar that pops up at the bottom of the screen. The differentiation happens on the Stribe network service, which allows a site’s community to interact with other communities on all Stribe-enabled sites. Moving forward, the company plans to open its API for website developers and provide more premium modules.

LeWeb: Kukunu wants to be your travel agent online [UK] Kukunu is a London based start up that aims to replace traditional travel agents. The founders Gerald Goldstein and Itamar Lesuisse wants to help people build their holidays online, with the tag-line ”travel is better when you plan it yourself”. Most reasonably tech-savvy people already know this and can find their way around all those price comparison and hotel review sites out there. However Kukunu wants to offer a broader service than their competitors and guess their way to all your travel needs. Watch Kukunu’s pitch at 00:04:36 Fab Tree Hab Living Tree House This home concept is intended to replace the outdated design solutions at Habitat for Humanity. We propose a method to grow homes from native trees. A living structure is grafted into shape with prefabricated Computer Numeric Controlled (CNC) reusable scaffolds. Therefore, we enable dwellings to be fully integrated into an ecological community. 1. Composed with 100% living nutrients.2.

History of the Hyperlink Today we talked about many different kinds of interactive experiences—both digital and non-digital. In discussing the digital realm, we identified environmental, non-linear navigation, avatar-based games and community/collaborative interactive types. Probably the most pervasive source of interactive experiences today is the Internet. And at the heart of those experiences is the hyperlink (in the form of hypertext and hypermedia). What’s the story behind this important innovation?

LeWeb: Storific riffs on hyperlocal, real-time conversation thro [FRANCE] Another startup pitching on their home turf is Storific, which is all about getting companies and customers talking to each other using the de facto social media avenues we know as Twitter and Facebook. Watch the Storific pitch at 00:22:30 It’s your classic ‘opt-in for great rewards’ model that drives the plethora of email newsletter services which most companies still rely on as their mainstay of direct communication with consumers. In the social media space, this communication loop is scattered and disorganized, which is the problem the company is trying to fix.

Vannevar Bush Vannevar Bush (1890-1974) is the pivotal figure in hypertext research. His conception of the Memex introduced, for the first time, the idea of an easily accessible, individually configurable storehouse of knowledge. Douglas Engelbart and Ted Nelson were directly inspired by his work, and, in particular, his ground-breaking article, "As We May Think." Bush did his undergraduate work at Tufts College, where he later taught. His master's thesis (1913) included the invention of the Profile Tracer, used in surveying work to measure distances over uneven ground. In 1919, he joined MIT's Department of Electrical Engineering, where he stayed for twenty-five years.

FriendBinder – Not Just Another Lifestreamer At first glance FriendBinder, the UK based start up from the midlands, looks just like another ‘me too’ lifestream site. Plug in your social networks including Twitter, Facebook, Flickr, Last FM and RSS feeds and watch a live stream of all your friends information. Use the update function like a Twitter client to update your Twitter and or Facebook account. So far, so familiar. However, play a little longer and you will find some nifty features. Using the search function at the top of the page, I can search for any word (not just hashtag) that interests me, in this example, The Next Web.

Sources of public domain maps Libraries are a natural starting point in any search for public domain maps, especially university libraries and large public libraries (go to the reference section and ask). But if you’re looking for public domain maps online ... here's a list to get you going. Note: For each site offering public domain maps listed below, I tell you what you’ll find and what each site’s fine print says. (You know, the stuff nobody wants to read.) Inventor of the Week: Archive Inventor of the Week Archive Browse for a different Invention or Inventor Hypertext Vannevar Bush, the inventor credited with the principles underlying modern hypertext research, was born on March 11, 1890 in Everett, Massachusetts. He was a headstrong child who showed an early aptitude for math. After graduating high school he enrolled at Tufts College in Massachusetts to study engineering.

Gadgetvice.com - l'actualite high tech et gadget au quotidien - ordinateurs, telephones portables, appareils photos, USB Posted in NSFW8 hr 40 min ago / 4869 views Can you guess how old she really is? Posted in Picdumps8 hr 42 min ago / 4921 views Posted in NSFW8 hr 43 min ago / 9821 views Dawn of the Information Age World War II created a need for more advanced information processing systems for war technology (e.g. radar and sonar) which led to the development of electronic computers. Computers are unique in that they neither generate power nor manufacture a tangible product, they simply process information. Understanding the computer required the development of new ways to model the flow and transformation of information. These models were to have a strong influence on cognitive psychology (see 'Human Information Processing' in this history). In a related development, the war led to advances in goal-directed/self-regulating systems (e.g. guided missiles, which must regulate their behavior to stay on course to their target) A new branch of mathematics, named 'cybernetics' was developed to model the behavior of these goal-directed/self-regulating systems. The anthropologist Gregory Bateson took the principles of cybernetics and applied them to the life sciences.

TeK Computer Inc. It’s a Stylish Keyboard on the Outside, a Smart PC on the Inside Taipei, Taiwan, May 1, 2010 – ASUS today continues to deliver on its promise of cutting edge technological and design innovations with the launch of the EeeKeyboard PC—a fully-functional PC concealed within a svelte and stylish keyboard. First unveiled to a tremendous reception at CES 2009 and subsequently garnering 1st place at the CeBIT-PreView 2009 Awards, the portable 1kg EeeKeyboard PC works with any HDTV*, monitor*, or projector* to turn itself into a full-fledged PC. It provides users with a wireless computing platform, with Ultra-wideband (UWB) Wireless Display connectivity enabling it to stream HD 720p videos up to a 5-meter range (maximum 10-meter range for non-video transfers). Its built-in 5" multi-touch panel provides users with an interactive and intuitive means of directing the on-screen cursor to launch programs, send instant messages, and control its media player.

History of Psychology The following program was originally written for a two-week section of an orientation course for psychology majors and minors. Thus, it is rather humble in its scope. I chose to focus on the intellectual history from which psychology emerged as well as the cultural context in which it continued to evolve. Much of the history of psychology itself I leave to the various content-specific courses within the department (e.g. Abnormal Psychology and Theories of Learning).