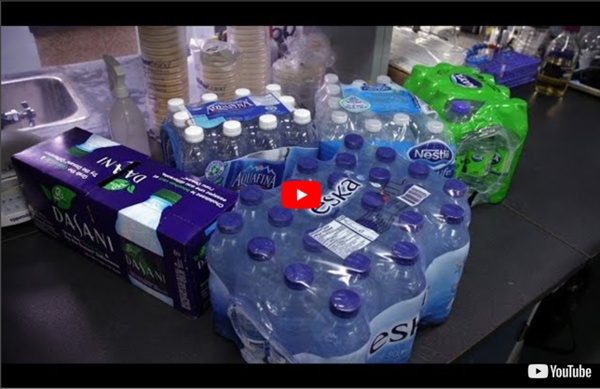 Ditch the almond milk: why everything you know about sustainable eating is probably wrong In food and drink, we all want to do the right thing. We want to shop and eat sustainably. But, sometimes, it is easier said than done. Our willingness to jump on the latest eco-trends and unquestioningly accept reassuring labelling can lead to unintended consequences. If we are serious about eating green, we need to read beyond the headlines and think rigorously about how we apply ethical advice in our own lives. By way of inspiration, here are some of the ways we get it wrong on ingredients, storage and recycling – and a few surprisingly easy solutions.

microplastics - rivers & lakes too click 2x When you think of microplastic pollution, plastic debris less than five millimetres in size, you likely envision the ocean — probably because ocean gyres gained notoriety for being a microplastic soup. But what about our lakes, rivers, forests and fields? They can be just as contaminated with microplastic debris as the oceans. Until recently, these environments were described as conduits — ways for plastics to get to the oceans. But now we’re seeing rivers, lakes and soil in a different light, as reservoirs for plastic particles. We now know that agricultural land, surface waters, freshwater lakes and river sediments are also contaminated.

Eating Healthy Is Good for Your Brain The more fruits, vegetables and fish respondents say they eat, the better they rate their brain health and overall health. Sixty-three percent of the adults surveyed say they eat a healthy diet up to three or four days a week. Those who eat seafood in a typical week, but not red meat, report better brain health and higher average mental well-being scores than individuals who have red meat but not seafood.

Circumcision: Social, Sexual, Psychological Realities We continue examining myths about circumcision, including traditions, social and sexual relations. NOTE: Primary author is Lillian Dell'Aquila Cannon (see her blog), with assistance from Dan Bollinger Part 3 article continues after advertisement Myth: You have to circumcise the baby so that he will match his dad. Fact-checking an immigration meme that's been circulating for more than a decade A viral image on social media -- one that’s critical of illegal immigration -- has been circulating for years. The list of claims first circulated in the form of a chain email in 2006, according to Snopes.com. Six years later, we checked several of the claims ourselves. With immigration in the headlines today, these claims are popular again. So we’ll take a fresh look at them here.

Plastic Pollution in our Oceans Environmental Issues > Oceans Main Page > All Oceans Documents The Basics We're treating the oceans like a trash bin: around 80 percent of marine litter originates on land, and most of that is plastic. Plastic that pollutes our oceans and waterways has severe impacts on our environment and our economy. Seabirds, whales, sea turtles and other marine life are eating marine plastic pollution and dying from choking, intestinal blockage and starvation. Scientists are investigating the long-term impacts of toxic pollutants absorbed, transported, and consumed by fish and other marine life, including the potential effects on human health. How Bill Gates-backed vegan Beyond Meat is winning over meat-eaters Whatever your burger pleasure, targeting meat-eaters is a smart move — there are way more of them than there are vegans and vegetarians. Only 5 percent of Americans identify as vegetarian and 3 percent vegan, according to a 2017 Gallup poll. Those numbers haven't changed much in the last decade or so. Brown says the company found that 93 percent of the consumers in conventional grocery stores that are buying a Beyond Meat product are also putting animal meat their basket. "So they're buying not only plant based meat, but they're buying animal meat and that's a really important breakthrough for us," Brown tells CNBC Make It. One tipping point in bringing plant-based "meat" to the masses has been the increase in product quality thanks to brands like Beyond Meat, James Kenji López-Alt, chef/partner at Wursthall restaurant in San Mateo, California, tells CNBC Make It.

Plastic leachates impair growth and oxygen production in Prochlorococcus , the ocean’s most abundant photosynthetic bacteria Plastic leachates negatively affect Prochlorococcus growth Leachates of common plastic items (HDPE shopping bags and PVC matting) were made using a base of sterile artificial seawater. Exponential phase cultures of Prochlorococcus were inoculated into media containing a range of leachate dilutions (generated by volume/volume dilutions in AMP1 media of 50, 25, 12.5, 6.25 and 3.125% for HDPE; 10, 2, 1, 0.5 and 0.25% for PVC) alongside equivalent controls (AMP1 media with no leachate addition).