How to Make an Inexpensive Vertical Wind Turbine - Part 2 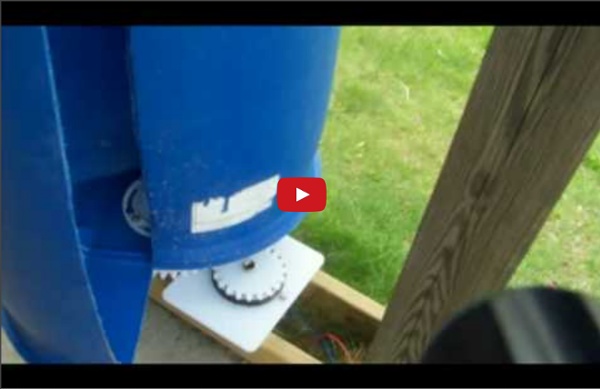 Make a Wind Generator Make: Projects With a motor and some piping, it’s easy to enjoy free energy forever. There are no limits to what you can do with wind power. We believe that anyone can be in control of where his or her electricity comes from, and there is nothing more rewarding and empowering than making a wind-powered generator from scrap materials. SolarFlower.org Wind Turbine Output Boosted 30% by Breakthrough Design Clean Power Published on April 29th, 2009 | by Timothy B. Hurst Passive structure design of “Wind Energizer” by Leviathan Energy reportedly increases wind turbine efficiency 30% in field tests. Technological advancements in wind energy efficiency have generally come incrementally and usually made via a process of increasingly large wind turbine blades. But that pattern of incremental improvements may be a thing of the past if Leviathan Energy has anything to say about it. The principle theory at work is that by placing passive objects around a wind farm it will change the circulation around a large wind turbine. “This is a disruptive technology,” Leviathan Energy CEO Dr. Farb is a bit of a modern day renaissance man. The Wind Energizer is a donut-shaped structure made from steel and plastic, but the exact dimensions of it depend on site-specific data, like the tower height, length of the blades, prevailing wind direction and intensity, etc. Images courtesy of Leviathan Energy Timothy B.

Wind Power Generators -- Windmills Annual Output (KWH/year) = 0.01328 (D^2) (V^3) source... Where D^2 is the blade diameter in feet squared, and V^3 is the wind velocity cubed in mph -- this is the year round average wind speed -- see wind maps below. So, a 10 ft diameter wind turbine in 12 mph average winds might produce about (0.01328)(10^2)(12^3) = 2300 KWH/year Note that the energy produced is proportional to the cube of wind speed -- having enough average wind speed is everything in wind turbines. Use the wind maps discussed below and a wind survey of your site to determine if a wind turbine will actually payoff. The graph is of the wind energy equation shown above for various wind speeds and turbine blade diameters See also: Solar and WIND water pumping ...

My amazing DIY solar generator I remember the inspiration for building my solar generator clearly. It was close to 20 years ago and we were camping at the dunes in Oregon. Our campground neighbor, in a huge RV, ran his generator for about two hours one evening. It was annoying beyond compare — we go camping for peace and quiet. We later found out from overheard conversations that the RV people were using the gas generator to charge their camcorder. Apparently they did not have a DC adapter or know about a thing called an inverter. More modern needs Twenty years ago I did not have a camcorder or a digital camera. My solar generator is made up of a single 12 volt, 10 watt solar panel that feeds a sealed 12 volt gel battery. Portable and silent A couple years ago we did a big tour of four states here in the west. One of our best camps was in Zion, where we spent four full days and nights. Emergency power, too Back here at home we have used the solar generator to power our computer’s DSL modem during power outages.

How I built an electricity producing wind turbine Several years ago I bought some remote property in Arizona. I am an astronomer and wanted a place to practice my hobby far away from the sky-wrecking light pollution found near cities of any real size. I found a great piece of property. The problem is, it's so remote that there is no electric service available. One thing I noticed right away about my property is that most of the time, the wind is blowing. Let me state up front that I probably won't be able to help you out much if you decide to build your own wind turbine. Since no one seems to be reading the FAQ, I will answer the No. 1 question I get many, many times a day right here up front. Update: Here is a video of the wind turbine in operation. Update: Here is a video of me assembling and setting up the wind turbine on my remote off-grid property. I started the process of designing my wind turbine by Googling for information on home-built wind turbines. I reduced the project to just five little systems. for only $26. . Finally!

Make your own solar power generator for less than $300 Whether you live off grid or just want backup power for emergencies, having a small solar generator at home can definitely come in handy. While most store-bought solar generators can be pretty pricey, you can actually create your own with parts easily acquired through the internet or at local stores for $200 to $300 – and you don’t have to be an engineer to do it. An online tutorial created by Phil Heiple features easy-to-follow instructions with amusing illustrations that guide you through each of the eight steps. Once you obtain the parts, which include a small solar panel, a battery, a DC input and an AC inverter, assembly takes about an hour to complete. When you're done assembling your new DIY solar power generator, place the solar panel in the sun for five to eight hours to charge the battery the first time. The finished product is small enough to tote on camping trips, on the boat, out in the field or while traveling in the third world.

DIY wind turbine beats solar on price You may have heard of William Kamkwamba, the Malawian teenager who built a wind turbine out of spare bicycle parts and scrap metal and wood. His turbine provided electricity in his home for the first time and allowed them to replace smelly, expensive kerosene lamps In 2001 his family couldn't afford the cost to send him to school, but he didn't let that stop him from teaching himself the basics of electrical engineering out of an old school book and building a wind turbine that powered four lights, two radios, and a cell phone charger. He built his own homemade light switches and circuit breakers and has dabbled in radio transmitters. Mr. Though 22 year old Oklahoman Kevin Harris might not have come from as humble roots as Mr. Here's one of his turbine in action. Swing over to his site and check it out- everything on the list is available at your local big box home improvement store, you just have to provide the funds, elbow grease, and a spare weekend.

Building your own generator. Privacy Policy | Returns Policy | Shipping Policy The material presented on this page is intended to start you thinking about what you can do today that might someday save your life. If nothing else, our "Tip o' da Week" might just make your life a bit easier when a disaster strikes. -- See More Tips -- This tip is a visitor submission from David Hooper from Vancouver, BC (with additions from the crew at TheEpicenter.com) About this T.O.W. submission: In 1996 we ran a Tip o' Da week submitted by David Hooper from Vancouver, BC, which discussed building a generator from an old lawn mower and a GM alternator. About David Hooper David says, "I am a Canadian Civil Servant, with the Department of Indian Affairs and Northern Development, in the British Columbia Region. Home Brew Power! Building your own generator (on the cheap). This Tip o'da Week is intended for educational purposes only. The project in David's own words: "It isn't difficult to make this work. What can this generator be used for?

How to set up Off the Grid or Emergency Battery almost free garage heat – just drink a lot of soda | Hemmings Daily I’ve had a few days during the HMX build while I’m either waiting for parts or waiting for something to dry and had some free time. I’m not exactly one to sit and watch TV when I have nothing planned, so I set out on another project. While I have electricity out to the garage now, heat has been an issue all winter long. Mattar graciously lent me his kerosene heater, which did an okay job of taking the bite off the chill. Insulating the garage would go a long way to help keep the bitter Vermont cold out, but that’s a project for another day. I decided instead to take advantage of the south-facing side of the garage and build a solar furnace to collect some of that sunshine just bouncing straight off my garage. I started with some 2x4s and plywood to build a simple box. I actually built the box to certain dimensions, based on what scrap materials I had and on the dimensions of my heat collection method – aluminum cans. Stack the cans with liberal doses of adhesive caulk.