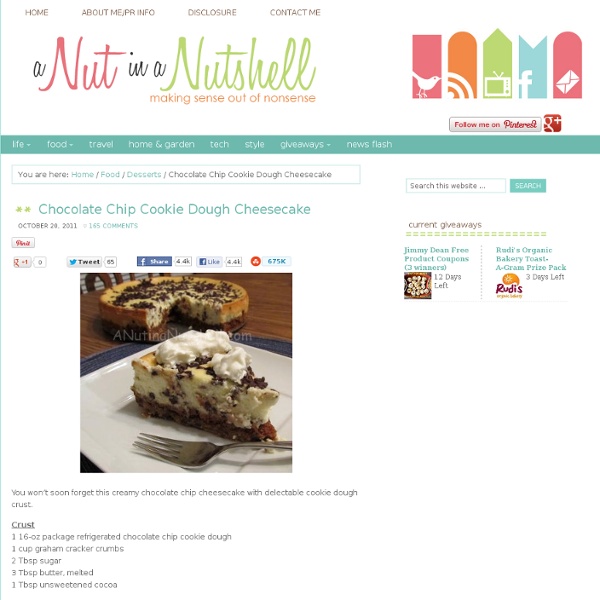 Vanilla Latte Cookies November 3, 2011 | Print | E-mail | Filed under 12weeksofchristmascookies, cookie Now that Halloween is over (and we’re halfway through the 12 Weeks of Christmas Cookies!), are you already planning for Thanksgiving? I know some who are already knee-deep in planning, and others who haven’t even thought about it yet. I’m somewhere in between; since it’s my turn to host again this year, I’ve been trying to put together a menu at least so that I can let people know what else to bring. So far it’s slow-going, although I do have a few ideas in mind.

Oreo and Peanut Butter Brownie Cakes - StumbleUpon So, after being gone all last week, this has been catch up on the house week. Mostly laundry actually. Man, who knew that a weeks worth of laundry from 5 people could be so daunting. Yikes!! But I am kind of behind on my cooking and baking as well since I've been gone and cleaning. Not to mention, I needed an Oreo fix!

2-Minute Chocolate Chip Cookie For One This is one of those ‘I-need-a-cookie-right-now-or-I-die’ recipes that can be prepared in almost no time.We all know that kind of situation, don’t we? I definitely do, I confess.And you know what? This impressive cookie not only takes less than 5 minutes to prepare, it tastes really delicious. Just like a good chocolate chip cookie.The preparation is beyond easy… just have a look… Cinnamon Roll Pancakes Updated 9/22/11 to Add: If you’re coming here to sample these delicious Cinnamon Roll Pancakes, you just might like the latest recipe that I’ve posted for Pumpkin Cinnamon Roll Pancakes too. And Gingerbread- Cinnamon Roll Pancakes too. Enjoy! How To Make Barista-Worthy Coffee At Home Make coffee at home instead of buying fancy lattes at the local cafe (or, OK, Starbucks outpost), and you’ll save boatloads of cash each year. Shocking, right? If only it were that simple. Although financial gurus repeatedly trot out the so-called latte factor as a prime example of how we’re all busting our budgets, the tired tip fails to account for one major hurdle: taste. If we all boasted barista skills and our home kitchens had $1,000-plus espresso machines, the venti whatevers wouldn’t stand a chance. As it is… well, let’s just say it’s no surprise that so many people are willing to fork over $5 for a caffeine fix.

Warm, Hearty Breakfast: Big Ol' Texas Baked Eggs There’s breakfast, and then there’s BREAKFAST. This recipe, right here, is the latter. A big, flaky biscuit topped with peppered bacon, and filled with a soft-cooked egg. With the weather coming in cool and drizzly, with a day full of school and work and housecleaning, with that pit in your tummy gnawing fiercely before your 10 a.m. snacktime, isn’t it time you baked up a warm, hearty breakfast? Sure, but who has the time, right? Vanilla Pudding Cinnamon Rolls with Cream Cheese Frosting Per the requests I got after my last cinnamon roll post, here is the recipe for my tried-and-true vanilla pudding cinnamon rolls with cream cheese frosting. The vanilla pudding is simply added to the dough to make it extremely soft and pliable – and oh, does it ever. (No surprise, this recipe comes direct from my Aunt Marilyn whose recipes have made a great showing on this blog already.) I made these last week and it confirmed my feelings: I am in love with these cinnamon rolls.

Martha Stewart's Cookies and Cream Cheesecakes Recipe Posted by Grace Massa Langlois on Wednesday, 21st July 2010 I have yet to meet a person who doesn’t like Oreo cookies or Cream Cheesecake Cupcakes. Who could resist cream-filled chocolate sandwich cookies?

A Blast From the Past I’m just finishing up the photos for my next recipe, but since we’re entering into flowery, lovely springtime, I wanted to bring this quick and easy—and too precious for color TV—dessert idea from my archives. I first posted it back in 2007 as I was making my way through a little recipe book I used in high school, and my girls plan to make some this weekend. I expect you to have a freezerful of these delights by 5:00 this evening. Back on the golf course, I used to have a traditional back-to-school party for my friends and me every year. Because I apparently had nothing better to do with my time and focus, I’d have Cranes invitations printed, would dress in my finest floral dress or suit, and welcome 15-30 girls into my parents’ house, where we’d all toast one another with sparkling grape juice and feast on chicken salad with dill and baked brie and things like that. Anyway, for the party after my sophomore year, I made these delightfully fun little flower pot desserts.

peanut butter pretzel bites « Two Tiny Kitchens Salty and sweet. Crunchy and melt-in-your-mouth. Peanut butter and chocolate. Dangerous and delicious (you know what I mean). One little bite, so much to experience. Sweet Chicken Bacon Wraps When it comes to appetizer preparation, those of you who are in-the-know realize that it's actually much less time consuming to prepare a full meal than to prepare a dozen different appetizers, but because so much of the prep work can be done ahead of time, and because this promotes a much more laid back atmosphere on Christmas day, I have gone the route of appetizers for the past couple of years. (Yes, that was all one sentence.) This recipe for sweet chicken bacon wraps comes from Paula Deen. It is the second Paula Deen recipe I've blogged about that includes no butter. The first recipe was for her lemonade and how she squeaked by without including butter in that one, I have no idea.