How to Get Rid of Things 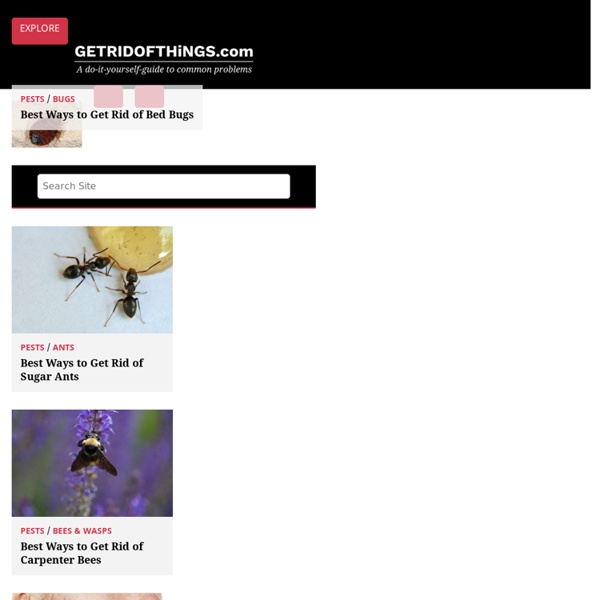 Notebook Artworks Moleskine notebooks are a favorite among many artists, designers and writers. They come in a variety of shapes and sizes, and with many different kinds of paper. The elastic closure and pocket in the back of each one adds to their utility. The popularity of Moleskines among the art community ensures that there are thousands of great examples of Moleskine art out there. Flickr alone has a huge pool of Moleskine artists. One group, Moleskine: One Page at a Time, has nearly 4,000 members and more than 36,000 images in their pool. Vanishing Point: How to disappear in America without a trace Where there's water, life is possible. True, it may be very difficult and very hard to live, depending, but anyone who's driven, hiked, or camped in the American South West will have noticed that cities and ranches crop up where there's surface water or where there's been a well dug. Within the state of California, Nevada, Arizona, Utah, New Mexico, and Colorado, there are deserts, mesas, mountains, and forests where normally people never or rarely visit; not-so-secret places where there's water, access to a road within a day's hike, and where a fairly rugged individual may hide while remaining basically healthy, marginally well fed, and reasonably sane. In this section I'll look at two such environments, neither of which I would recommend, but one of which I'd suggest is a reasonable way to live in basic health while either on the run, hiding out from the law, old girl friends, the draft for an illegal war, putative wives and such. Where exactly?

How to be “Stealth” Homeless “There, but for the grace of God, go I” goes the old canard, usually in reference to a disheveled homeless person, dressed in rags sitting on a street corner begging for change and smelling of b.o. What you are seeing is the result not of homelessness, per se, but dysfunctionality in general, due to substance abuse, mental illness and a host of other contributing factors. You may see homeless people everyday and never suspect them. Conversely, that panhandler on the street corner may not be homeless at all. But, perhaps, you have that fear in the back of your mind that such a fate could happen to you. Maybe you work a crappy job, living from pay check to paycheck “one paycheck away from living on the street” or maybe you remain in an abusive relationship in exchange for the security of a place to live.

33 Free and Online Tools for Drawing,Painting and Sketching There are many professional and of course paid programs for graphic designers or digital illustrators.But in recent years many online tools are also released for drawing,painting or sketching.Today,we’ve collected free,online drawing and painting tools.Ok,these tools are not professional and maybe just for spending a little time when you are bored but when you see some examples in the below sites you may be surprised. If you would like more professional style tools check out a company like Procore, but it might not be free. Some of these free tools are for kids and students and some are for more talented people.You can also share your creations with your friends directly. deviantART muro An interesting yet professional looking drawing and sketcing tool of Deviantart.

Marginal Revolution: How to disappear Tips from a teacher (markets in everything): There are three key steps to disappearing. First, destroy old information about yourself. Call your video store or electricity company and replace your old, correct phone number with a new, invented one. Introduce spelling mistakes into your utility bills. Lemon Cleanse LEMON DRINK for your Master Cleanseyou need:* 2 tablespoons FRESH squeezed lemon or lime juice (approx. 1/2 lemon)* 2 tablespoons genuine organic maple syrup, Grade B (the darker the better)** 1/10 teaspoon (a small pinch!) cayenne pepper, gradually increase (the more BTUs the better)* 300 - 500 ccm (10-14 oz) pure waterIn a 300ccm (10-ounce) glass (to allow for 227ccm and mixing room): 2 tablespoons fresh (and organic, if possible) lemon or lime juice (absolutely no canned or frozen juice). 2 tablespoons real (and organic, if possible) grade B or C maple syrup. (Don't use Grade A maple syrup or maple-flavored syrup. They are over-refined, which means that they are mostly refined sugars and lack essential minerals.) A small pinch of cayenne pepper (to taste). Spring or purified water, between room temperature and medium hot (but not cold) – fill to 1/4 liter (8 oz).

How to Disappear There are many reasons you might want to disappear, some honorable some not so honorable. Maybe you have a stalker or you would like more privacy, maybe you are avoiding domestic violence or identity theft... whatever the reason is here are a few tips that will help you do just that. The very first thing you should do if you would like to make your earthly presence a little less conspicuous is to stop getting your mail at the place you live. A post office box really wont do either because you need two forms of identification linking you to the place you live. However, you can get a post office box with an old address if you have recently moved and still have a utility bill and one other item with your old address on it.

Tutorial Tuesday: Drawing the Female Figure Tutorial Tuesday is here, and this week we’re going to tackle the Female Figure in comics. The basic tutorials and tips I’m going to discuss here applies to drawing females in your typical American mainstream action-hero style. You’ll notice that females vary greatly from genre to genre – you wouldn’t necessarily use some of the tips in this tutorial to draw females in manga, or if you were doing an Indie style comic where the females are normal in appearance. The women in mainstream comics tend to be hyper-sexualized, over proportioned and exaggerated idealistic forms, much like their beefcake counterparts on the male side. But – what you can take from this is the basic principles of anatomy. For this lesson, I’ve used illustrations from Christopher Hart as a visual aid to explain my points.