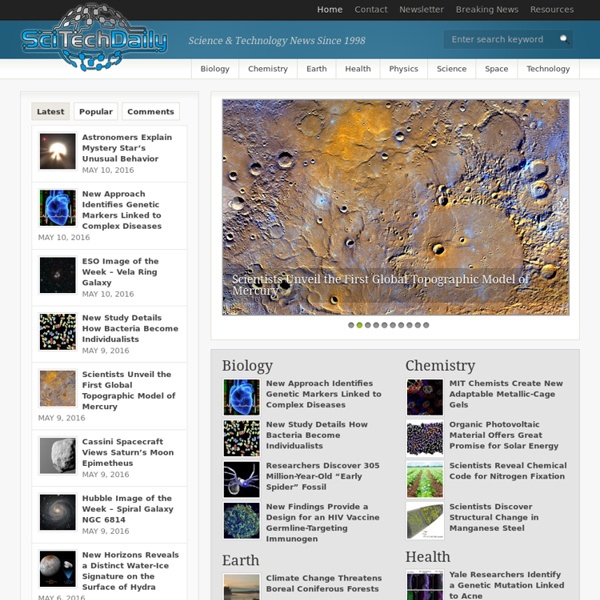 www.closertotruth Raymond "Ray" Kurzweil is an American author, inventor, futurist, and Director of Engineering at Google. Aside from futurology, he is involved in fields such as optical character recognition (OCR), text-to-speech synthesis, speech recognition technology, and electronic keyboard instruments. He is the author of several books on health, artificial intelligence (AI), transhumanism, the technological singularity, and futurism. Kurzweil is generally recognized as a public advocate for the futurist and transhumanist movements, due to his stances on life extension technologies, his efforts to forecast future advances in technology, and his interest in the concept of the technological singularity. At the same time, he has attracted significant criticism from scientists and thinkers.

ics News - Physics News, Material Sciences, Science News, Physics Study reveals traits and evolutionary history of carnivorous bats (Phys.org)—A pair of researchers with the University of Washington has found similarities between different types of carnivorous bats compared to those that are insectivores or those that eat fruit, nectar or of course ... Monkeys and humans share staring behavior Following another's gaze is a hallmark of human learning and socialization from infancy to old age. Humans change how they follow gazes throughout life, and disruptions in the ability to follow someone's gaze are warning ... Teen uses satellite imagery to discover possible ancient Mayan ruins

Are science teachers using experiments as props in lessons? Remember burning magnesium in school? Doing this for the first time as an 11-year-old who has just started secondary school is one of those magical experiences that all students should have. But I'm not convinced that the same is true of all practical work carried out in school science lessons. Practical lessons are popular with both students and teachers. But their popularity with students may lie in the fact that they are less demanding than theory lessons.

Science / Technology News 2 hrs ago | Seattle Post-Intelligencer Rocket leak delays space station delivery launch With just over an hour remaining, the Space X company called off Monday's planned launch because of a rocket leak. Trending on the Topix Network 2 hrs ago | WTAE-TV Pittsburgh When will Singularity happen – and will it turn Earth into heaven or hell? Defined as the point where computers become more intelligent than humans and where human intelligence can be digitally stored, Singularity hasn't happened yet. First theorised by mathematician John von Neumann in the 1950s, the 'Singularitarian Immortalist' (and Director of Engineering at Google) Ray Kurzweil thinks that by 2045, machine intelligence will be infinitely more powerful than all human intelligence combined, and that technological development will be taken over by the machines. "There will be no distinction, post-Singularity, between human and machine or between physical and virtual reality," he writes in his book 'The Singularity Is Near'. But – 2045? Are we really that close?

Chromosome Mapping: Human Genome Research in Progress The Human Genome Project was completed in 2003. One of the key research areas was Chromosome Mapping. This page details that research. Patterns of Glowing Sharks get Clearer with Depth A green biofluorescent chain catshark (Scyliorhinus retifer) ©AMNH/J. Sparks, D. Gruber, and V. Top 10 Scientific Discoveries of 2010 Now that 2010 has come to a close, we take a look at the top ten scientific discoveries and breakthroughs of this past year. 10. Scientists find life built with Arsenic An astrobiology research has found the first known organism able to thrive and reproduce using the toxic chemical arsenic, which has changed the fundamental knowledge about what comprises all known life on Earth.

Technology singularity - News & Rumors Posts Tagged «technology singularity» Elon Musk warns us that human-level AI is ‘potentially more dangerous than nukes’ August 4, 2014 at 8:39 amElon Musk, the mastermind behind SpaceX and Tesla, believes that artificial intelligence is “potentially more dangerous than nukes,” imploring all of humankind “to be super careful with AI,” unless we want the ultimate fate of humanity to closely resemble Judgment Day from Terminator. Personally I think Musk is being a little hyperbolic — after all, we’ve survived more than 60 years of the threat of thermonuclear mutually assured destruction — but still, it’s worth considering Musk’s words in greater detail. What is transhumanism, or, what does it mean to be human? April 1, 2013 at 1:25 pmWhat does it mean to be human?