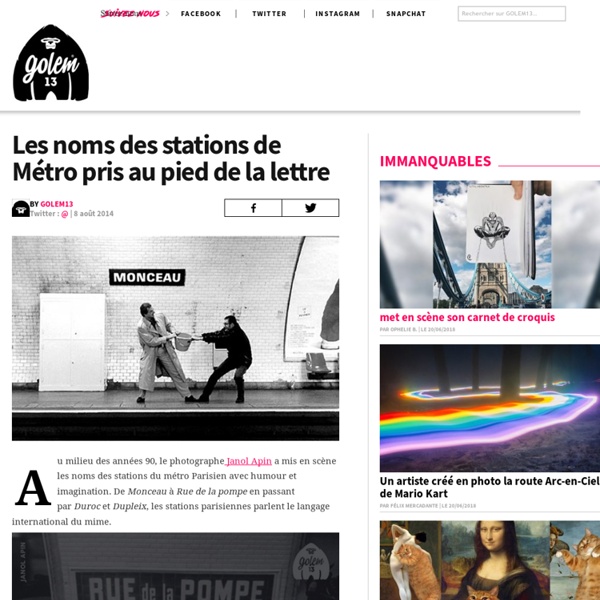 Time-travelling 3D tour shows birth of Eiffel Tower Sandrine Ceurstemont, editor, New Scientist TV Imagine visiting the World's Fair of 1889 in Paris, France, and seeing the Eiffel Tower just after it was built. Now thanks to an ultra-accurate 3D reconstruction, you can travel back in time to see it. Created by Mehdi Tayoubi from French company Dassault Systèmes and colleagues, the buildings in the video are represented exactly to scale, down to minute details such as the flags on the main pavilion. This level of accuracy was achieved by consulting a range of archival sources, such as building plans, drawings and maps, as well as consultations with historical advisors. Often several months were required to model a single building. French Interjections, Exclamations, and Other Fun Bits of Language There are many little parts of a language that you come to know when you live in the country itself. But they are indeed an essential part of a language. They carry strong emotional content that is direct and immediately meaningful. These are often very short phrases or sometimes just one word.

18 Fabulous Redesigns Of NYC's Iconic MetroCard How would you like to carry around a dash of glitter in your wallet? Or maybe some raw meat? Okay, not really. But if Melanie Chernock had her way, New York City’s classic yellow-and-blue MetroCard--a mainstay in the wallet of every New York snob straphanger--would be revamped to visualize the culinary and cultural diversity of the city itself. Info Noorderlicht is a many-faceted and international platform, originally only for documentary photography, but now for any photographer who has a good story to tell. With a sharp eye for new developments, but averse to trends and hype, we devote attention to the photography of the world and to the world of photography. We do this by organising an annual photography festival, programming exhibitions in our photo gallery, organising photographic commissions and arranging discussions, lectures and masterclasses. Noorderlicht provides an educational programme, and also publishes exceptional catalogues and photo books. Our exhibitions tour worldwide, and have been seen in the United States, Syria, Australia, Indonesia and other lands.

Eastern and Western attitudes about life explained in 18 simple infographics Yang Liu is an artist who was born in China but lived in Germany from the time she was 14. She designed this series of infographics to represent her observations about Chinese culture and German culture. She covers a broad variety of subjects, from what a typical party looks like to attitudes towards waiting in line. Top 10 Passages of Paris Based on the idea of a souk, a covered area in which to meet, shop and browse, it is believed that in Paris it was the Galeries du Bois du Palais Royal built in 1786, that became the model for the passages of Paris that appeared in the coming years. This arcade, which used to house 120 luxury boutiques, was one of the most popular spots in Paris before 1830 and surrounds the central gardens of Palais Royal which is open to the public. Imitation of the elegant and highly favoured Galeries du Bois du Palais Royal, saw the construction of galleries such as Galerie Feydeau (1791 – no longer exists), Passage Caire (1798 – present day) and Passage Panoramas (1799 – present day). Following on from this trend, some 30 more passages were built during the Bourbon Restoration (1815-1830) and diffused to other major cities of France and by 1850, Paris boasted almost 150 passages. when today there remain under 30.

Top 10 French "Texto" (SMS) Everyday, les "Jeunes" use this new language. The SMS, which in French is called Texto, or SMS (pronounced like in English, or "Smeu Seu" for fun). But what is it exactly? It consists of a series of abbreviations, which allow you to say more within the 160 characters the SMS format allows. It’s a faster language, easier to type on the 10 keys of the cell phone (un portable). Well, easier… faster said than… understood!!!

Lumen Bigott – Graphic Designer & Marketer » Social Media Shoes Social Media Shoes I’m a big fan of inspiration blogs, I also spend a lot of time in social networks and I love fashion: those three things are responsible for this shoes collection. The idea was to find the most important graphic elements of my favorite social networks and apply them to my favorite pair of shoes trying to keep alive the essence of each brand. Henryk Makarewicz & Wiktor Pental In the 1950s, at the dawn of Polish socialism, Nowa Huta was thrown up near Cracow. This new Polish city was to be the manifestation of the socialist ideal. The residents were brought there from rural areas in order to work at the Lenin Steel Works, in an environment full of propaganda. Nowa Huta was the model for the birth of a New Pole. Henryk Makarewicz and Wiktor Pental photographed daily life in Nowa Huta, something which was expressly against the rules.

Bisou This post was inspired by a question from a friend of mine who was asking about the differences between the French words used to say “kiss”. I thought it would be appropriate to help define them here for my readers as there are several words and their meanings or connotations are not all exactly the same. Le Baiser by Auguste Toulmouche

Verlan - French Slang à l'envers Verlan is a form of French slang that consists of playing around with syllables, kind of along the same lines as pig Latin. Unlike pig Latin, however, verlan is actively spoken in France - many verlan words have become so commonplace that they are used in everyday French. To "verlan" a word, simply separate it into syllables, reverse them, and put the word back together. In order to maintain the correct pronunciation, the verlaned word often undergoes some spelling adjustments.