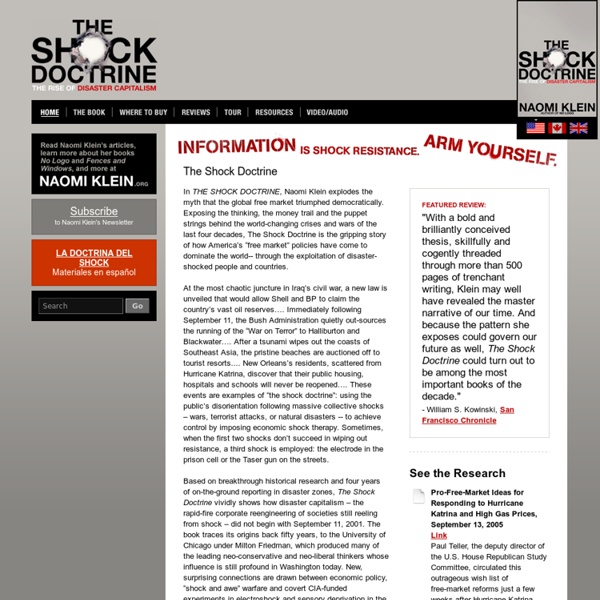 In THE SHOCK DOCTRINE, Naomi Klein explodes the myth that the global free market triumphed democratically. Exposing the thinking, the money trail and the puppet strings behind the world-changing crises and wars of the last four decades, The Shock Doctrine is the gripping story of how America’s “free market” policies have come to dominate the world-- through the exploitation of disaster-shocked people and countries. At the most chaotic juncture in Iraq’s civil war, a new law is unveiled that would allow Shell and BP to claim the country’s vast oil reserves…. Immediately following September 11, the Bush Administration quietly out-sources the running of the “War on Terror” to Halliburton and Blackwater…. Based on breakthrough historical research and four years of on-the-ground reporting in disaster zones, The Shock Doctrine vividly shows how disaster capitalism – the rapid-fire corporate reengineering of societies still reeling from shock – did not begin with September 11, 2001.

U.S. National Debt Clock : Real Time Rolling Stone Politics | Taibblog | Matt Taibbi on Politics and the Economy Thank You, Rolling Stone | BLOG ENTRY Today is my last day at Rolling Stone. As of this week, I’m leaving to work for First Look Media, the new organization that’s already home to reporters like Glenn Greenwald, Jeremy Scahill and Laura Poitras. I’ll have... February 20, 2014 10:35 AM ET Ex-Morgan Stanley Chief Jams Foot in Mouth, Complains of CEO Abuse | BLOG ENTRY There's a ton of interesting stuff going on in the Wall Street sphere of late – I'm trying to find some time to do a proper write-up of the extraordinary lawsuit just filed by the Better Markets... Democrats Must Stop Ted Cruz's Hollywood Ending | BLOG ENTRY Having lived in the former Soviet Union for 10 years, I will forever have plastered to the back of my cerebellum the commemorative bumper sticker: "WWSD?"

Flood Recovery Too Slow; Buyout Too Low for Some CEDAR RAPIDS - Much of the criticism surrounding flood recovery and buyouts surrounds the slow pace. But there are others who say they are willing to wait even longer. It all comes down to money, and a well-known phrase for disaster victims, "duplication of benefits." The federal government won't pay twice for any disaster loss. That means people who had flood insurance will have to deduct that amount from any buyout payment. The federal government runs the flood insurance program and also funds the two buyout programs- and none can overlap. Many are realizing a buyout won't be what they expected. You can still see the high water mark on the backboard, denoting the low point of Dennis Ades life. "I lost all my personal possessions, I got out my cat, my cars, two weeks of clothes," said Time Check flood victim Dennis Ades. He had flood insurance. He cleaned out the inside, repainted the outside, and the boarded up windows match the trim. He won't even get half its value

Desktop - Free file manager for increasing 4shared productivity 4shared Desktop is free application for Windows, Linux and Mac PC’s expand 4shared functionality. Speed up the routine process of uploading hundreds files to your account and make it much easier. Friendly well-known, easy to use interface and perfect usability of 4shared Desktop will increase productivity of your work and greatly lighten performance of tasks. This easy to use software is designed specifically to help manage multiple file uploads. On this window you should fill in the login and password of your account that you were using during the registration to 4shared service. Tick the "Remember me" check box if you want the application to remember the login and password and log in your account automatically when it starts. Once you felt in the fields click the "Login" button to open your account. After the program log in successfully and receive data of your account the main window is shown. Select the directory where you want to upload files to. Resume uploading is available!

The Official Paul Krugman Web Page News!! I am starting up my Princeton web site. It is at www.wws.princeton.edu/~pkrugman/ It's only partial, but eventually all files will move. I'm back! What's newArticles in FortuneArticles in SlateOther writingStuff that is harder to readAdditional biographical infoWhat I look like My honorary degree ceremony in Berlin (text of talk, audio, video) Special page on Japan (direct links to Japan-related pieces) Some favorite links (updated)The unofficial page (A fan has set this up: I disavow any knowledge of his actions) Welcome to my home page. Most people who have accessed this page probably know who I am, but for anyone else here is a summary. I have written or edited 18 books (I think) and several hundred articles. With any luck, you will find many of these pieces extremely annoying. But read the articles and judge for yourself. Articles Stuff that is harder to read" What happened to Asia? Copyright © 1997 Massachusetts Institute of Technology

FEMA Explains Why Some Cedar Rapids Residents May Need Flood Insurance | KCRG-TV9 | Cedar Rapids, Iowa News, Sports, and Weather | News CEDAR RAPI DS -- More than 300 Cedar Rapids property owners might have to get flood insurance. The Federal Emergency Management Agency met with the city council Wednesday night to explain why. FEMA's standards have changed, and Cedar Rapids' current levee system just doesn't meet the government's new requirements. One way to solve that problem is to ask those 300 property owners to get flood insurance.Cedar Rapids levees need to be about three feet higher to meet federal standards. Otherwise, FEMA officials say these neighborhoods could end up underwater. So, FEMA plans to expand the city's floodplain about two-years from now to include new homes and businesses. "Just because a new map is drawn doesn't mean the flood risk has changed. The government's standards have become more strict since Cedar Rapids built the levees decades ago. FEMA officials say if property is in a floodplain, there's always a chance of a disaster. The city also has the option of improving the levy system.

WikiLeaks Jeremy Scahill With drone strikes and kill lists, the president set a dangerous precedent. How three US citizens were killed by their own government in the space of one month in 2011. Within some military and intelligence circles, it was the CIA director's relationship with JSOC—not Paula Broadwell—that raised concerns. Luego de que sus partidarios cuestionaran la legalidad de la corte que lo condenó, Abdulelah Haider Shaye debería haber sido puesto en libertad. After supporters protested his “sham” trial, Abdulelah Haider Shaye would have been pardoned. How US counterterrorism operations ignited an Islamist uprising. How US proxy wars helped create a militant Islamist threat. Renditions, an underground prison and a new CIA base are elements of an intensifying US war, according to a Nation investigation in Mogadishu. Meet the Special Operations unit that killed Osama bin Laden. If President Saleh falls, the US will have lost a pliant partner in its “global war on terror.”

Study finds link between political corruption and FEMA money Where natural disasters strike, political corruption is soon to follow, say the authors of a study in the Journal of Law and Economics. But it's not the wind and rain that turns good folks bad; it's the money that floods in afterwards from the Federal Emergency Management Agency. "We find each $100 of FEMA-provided disaster relief increases the average state's corruption by nearly 102 percent," write Peter Leeson (George Mason) and Russell Sobel (West Virginia U.). "Our findings suggest that notoriously corrupt regions of the United States, such as the Gulf Coast, are in part notoriously corrupt because natural disasters frequently strike them. Leeson and Sobel base their conclusions on a statistical model that measured the relationship between FEMA allocations and corruption in each U.S. state. Hurricane-prone states like Florida, Mississippi and Louisiana, which receive large amounts of FEMA money, tend to have more corruption convictions per capita.

not_available Chris Hedges, Columnist Chris Hedges Chris Hedges, whose column is published weekly on Truthdig, has written 11 books, including the New York Times best seller “Days of Destruction, Days of Revolt” (2012), which he co-authored with the cartoonist Joe Sacco. Some of his other books include “Death of the Liberal Class” (2010), “Empire of Illusion: The End of Literacy and the Triumph of Spectacle” (2009), “I Don’t Believe in Atheists” (2008) and the best selling “American Fascists: The Christian Right and the War on America” (2008). His book “War Is a Force That Gives Us Meaning” (2003) was a finalist for the National Book Critics Circle Award for Nonfiction. Hedges previously spent nearly two decades as a foreign correspondent in Central America, the Middle East, Africa and the Balkans. Hedges was part of the team of reporters at The New York Times awarded a Pulitzer Prize in 2002 for the paper’s coverage of global terrorism. Hedges is a senior fellow at The Nation Institute in New York City.