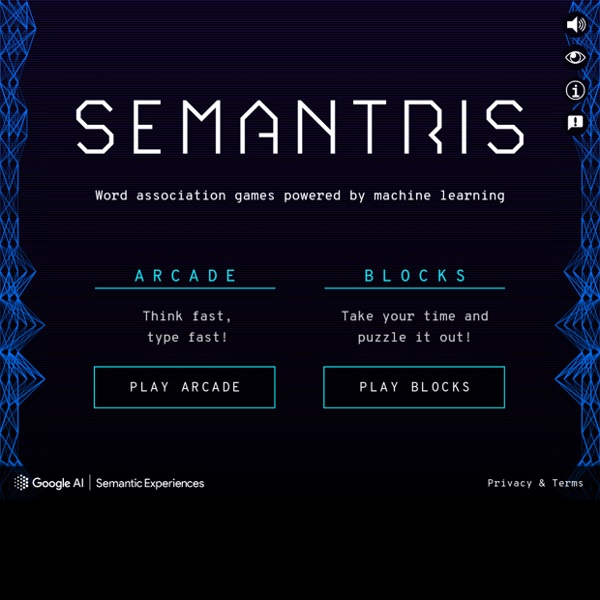 Brain Teasers A girl called GL lives on the eleventh floor of a block of flats. Every morning when she goes to work she takes the lift down to the ground floor. When she comes home in the afternoon, she presses the button for the eighth floor and walks up the last three flights of stairs. Catchphrase - The Game Gal What you need: Words to guess (either written down on strips of paper, or perhaps generated by a handy online word generator someone made) and a timer. How to play: The point of the game is to get your team members to guess the target word by explaining the word to them out loud. The trick is, you can’t say the word (or any variant of the word) or you lose the round. So to start, prepare a bunch of words or phrases on slips of paper (see below for some pre-made printable word lists, or use my online word generator).

Game On! The 10 Best Online Games to Practice English Online games to practice English changed everything for a friend of mine. Tell me if this sounds familiar. My friend just couldn’t get anywhere with English class. He’s a French speaker from Canada and was studying English as a second language in school. It seemed like no matter how many times he reviewed his notes and did his homework, he wasn’t able to improve. Eventually, he stopped spending so much time studying English and just started playing online English games instead.

WORD GAMES Ammon Shea, a 37-year-old former furniture remover in New York, spent 12 months conquering what he describes as the Everest of dictionaries, the Oxford English Dictionary (OED), by ploughing through 20 volumes, 21,730 pages and 59 million words (read more here). We can only guess how much of what he read has stayed between his ears, which is, at times, quite a challenge for our students. Luckily for the latter, though, their word lists are much shorter. We can use some magic formulae for helping words stick in the head trying to come up with clever associations, getting students to use definitions, determining a rate at which words should be learnt without falling out of their heads, creating some “brain surprises” (see more here), or resort to some oldies but goldies – word games. These are some pen and paper games that require next to no time to prepare and might be used to get students to look through their word lists again and again, and help them retain new vocabulary.

A letter from Fred Fakta om filmen Dokumentär med låten Sweet Lorraine av Fred Stobaugh. Av: Green Shoe Studio. BATTLESHIP: IRREGULAR VERBS Much to learn, you still have. – Joda. Despite the evidence that the number of irregular verbs is declining in the English language, there is no danger they will disappear, and the struggle will continue. There are many attempts to find a shortcut in learning irregular verbs, yet with all the options and “magic tricks” available, learning these verbs requires much memorization, drilling and practice. Today I will show how I use the Battleship game to drill and practise irregular verbs in a fun way. Before the game: Each player will need two 10×10 grids – one with irregular verbs in each square, and one blank grid.

Word Dominoes – tekhnologic The other week I wanted an activity that would allow students to have a controlled practice that could be done in small groups, but had a repetitive quality to really practice the target language. I decided on dominoes. Dominoes is another activity that is an old favorite in the ESL classroom. This article is just my thoughts on how to run the activity and some advice on how you can create your own custom domino sets. As an example, I have chosen to use WH question words. Click on the image to download a PDF copy of this dominoes set. Thinking time - a puzzle In this activity, students work together to solve a 'cocktail stick' puzzle. Students are given plenty of support and use 'thinking time' before the speaking task. The lesson is usually successful with adults and teenagers because of the puzzle element.

Game Word Generator - The Game Gal When I was putting together this site of games, I discovered that my printable word lists became very popular. I had word lists for pictionary, charades, and other games, and visitors seemed to really like them! So I got to thinking, what’s one step better than a printable list of words for playing pictionary? An online word generator! Here I’ve taken all the words on my printables, plus hundreds more, and combined them into different categories for playing games like pictionary, catchphrase, charades, or any other game you want.

A Scandal in Bohemia: Chapter 1, part 11 aɪ ˈθɪŋk ðət aɪb ˈbetə ˈɡəʊ ˈhəʊmz ˈnɒt ə ˈbɪt ˈdɒktə | ˈsteɪ weə ju ˈɑː | aɪm ˈlɒs | wɪðˈaʊp maɪ ˈbɒzwel || ən ðɪs ˈprɒmɪsɪz tə bi ˈɪntrəstɪŋ || ɪt əb bi ə ˈpɪti tə ˈmɪs ɪt bəʧɔː ˈklaɪənt Educational Games We have a variety of educational games including word, puzzle, math, geography, arcade, sports, and typing games. Some are educational games (i.e math, geography, etc.) and some are just for fun (i.e. arcade, sports). The games above provided by Ducksters are relatively simple games that are generally puzzle or educational games. They can be enjoyed by most students of all ages. We are always looking into adding new games, so check back often. Three Geography Games Based on Google Maps and Google Earth One of the things that I emphasize to students before they embark on any kind of research or problem-solving task is to take a good long look at the information that they already have before them. To that end, I'll often request that they construct a list of what they know about a topic or problem before they begin to search. Playing one of the following three Google Maps-based games is a fun way to reinforce the concept of using prior knowledge and observations. GeoGuessr is an addictive geography game that is based on the Google Maps Street View imagery. When you visit GeoGuessr you can choose to play as a single player or you can register to challenge another player. The game is played the same way whether you choose single player or challenge mode.