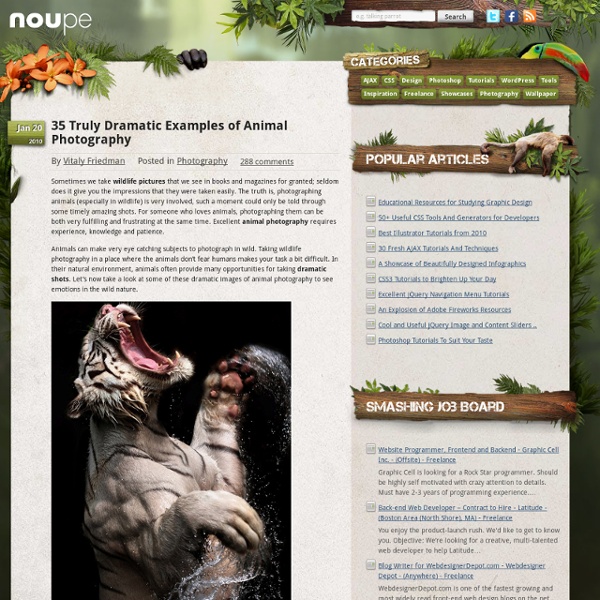 Operating Systems Tech Support: "May I ask what operating system you are running today?"Customer: "A computer." A girl walked into the computer center where I work. Fly Geyser - Not Quite of this World They look as if they were taken on another planet, or at least on the set of a new and very expensive science fiction movie. Yet these pictures are of the Fly Geyser which is very much of planet earth (Nevada, US to be exact). However – and herein lies the surprise – it is effectively man made. Captured: Color Photography from Russia in the Early 1900′s Posted Oct 21, 2009 Share This Gallery inShare58 The photographs of Russian chemist and photographer, Sergei Mikhailovich Prokudin-Gorskii, show Russia on the eve of World War I and the coming of the revolution. From 1909-1912 and again in 1915, Prokudin-Gorskii travelled across the Russian Empire, documenting life, landscapes and the work of Russain people. His images were to be a photographic survey of the time.

Amazing Photos 2012: The Best Pictures Of The Year, So Far (IMAGES) So far, 2012 has produced some amazing photography, a point more than proved by a series of images compiled by one Internet user. Reddit user stoopidtrooper posted this gallery of 48-images from photo sharing site Imgur on Monday. It captures some of the most amazing photos taken in 2012. Baked Eggs in Bread Bowls This was our breakfast Sunday morning. Aren’t they cute? They were very, very good. It’s the whole egg and the toast combo all together in one nice package. These are so easy to make and wouldn’t they be splendid on a brunch buffet table?

friday afternoon & Funny Emails Friday afternoon fun… Part 4 Posted by Jon in Images on September 18, 2009 This cat is going to fuck somebody up! Has anyone seen this cat? Because it is AWESOME! 25 Most Beautiful Animals Photography on StumbleUpon I think the most beautiful pictures are those made in nature. Nothing compares with the expression of a tiger, the majestic flight of an eagle or the strength of a white bear. Below you can see 25 the most beautiful animal photographs that will capture your attention, and were stumbled on StumbleUpon. Body Art - Hand Animals These have to be some of the best examples of hand art I’ve ever seen. Great fun to look at for the kids and a real example of how to disguise your hand as an elephant, eagle or tiger. Click the main post for the full set of pictures.

25 Mind-Blowing Aerial Photographs Around the World Rano Kau volcano in Rapa Nui National Park, Easter Island, Chile – Photograph by YANN ARTHUS BERTRAND For me, the allure of aerial photography is the unique perspective it gives. The world feels so different when viewed from above. It always gives me a newfound appreciation for this pale blue dot we call home. In my opinion, there is no better aerial photographer than Yann Arthus Bertrand. Daredevil photographers brave boiling waters to capture the drama of searing-hot lava crashing into the seas off Hawaii By Daily Mail Reporter Published: 12:02 GMT, 5 September 2012 | Updated: 15:09 GMT, 5 September 2012 Two photographers risked their lives to become the first people to capture the explosive moment fiery lava crashes into the sea. Nick Selway, 28, and CJ Kale, 35, braved baking hot 110F waters to capture these images, as they floated just feet from scalding heat and floating lava bombs. The pair, who chase the lava as it flows from Kilauea through Kalapana, Hawaii, spend their days camped on the edge of active volcanoes to capture the incredible images.