Things You Really Need to Learn 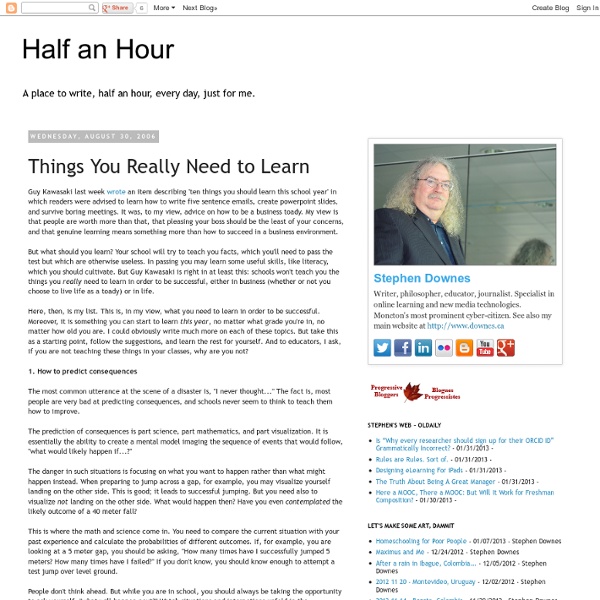 Guy Kawasaki last week wrote an item describing 'ten things you should learn this school year' in which readers were advised to learn how to write five sentence emails, create powerpoint slides, and survive boring meetings. It was, to my view, advice on how to be a business toady. My view is that people are worth more than that, that pleasing your boss should be the least of your concerns, and that genuine learning means something more than how to succeed in a business environment. But what should you learn? Your school will try to teach you facts, which you'll need to pass the test but which are otherwise useless. Here, then, is my list. 1. The most common utterance at the scene of a disaster is, "I never thought..." The prediction of consequences is part science, part mathematics, and part visualization. The danger in such situations is focusing on what you want to happen rather than what might happen instead. This is where the math and science come in. People don't think ahead. 2.

meyerweb.com Esther's Web Log Warning: contains spoilers for the plot of both the book and the movie. I have finally gotten around to reading the copy of Midnight in the Garden of Good and Evil that a friend lent me in 1997 just after we watched the film together (thanks Helen). The book is wonderful. For me it was an 8 hour book (a nerdy thing I do is work out how long a book is going to take to read by timing how long it takes to read the first couple of pages and then doing the math to work out approximately how long the whole book will take), and I whizzed though it in about 5 days (this indicates that I stayed up beyond my bedtime several of those 5 nights to keep reading). The book gently weaves the author John Berendt’s observations of the people he meets in the US city of Savannah, their stories, their biases, their gossip, around the major story, the murder of a young man by an older and very important member of Savannah society. I would like to ask John Berendt:

The Australian Index mercuryfern eezblog: art Marcus Hicks' Web Log The truth about Israel pt. 1 Well, I feel certain that what I am about to say will earn me the label ‘Anti-Semite’ by the Jewish Lobby and their fan-club (if I was Jewish, then I would be labelled as a ’self-hating Jew’ ) Much has been made-in light of recent events-about how Israel is an ‘innocent nation’ simply ‘defending itself’ from foes who want to destroy it. Though I agree that their are organisations which want the destruction of Israel (a totally unrealistic attitude which I utterly condemn, btw) these statements are highly simplistic. The truth is that the 1st Century Diaspora left the nation of Judea with only a very small Jewish population (less than 10%). For those who want to know about the IR reforms Pt.2 OK, so I have pointed out how IR reforms won’t be good for us, but how will they be BAD for us? For those who want to know about the IR reforms Hiya guys. Marcus. Howard Sucks Pretty much says it all, doesn’t it? Yours, Marcus. Hi

LesDeuxPoetes The Dilbert Blog Mantz's Mission Web Design Blog by Smiley Cat Web Design Social Media - What is it good for?Vanguard Visions Consulting Sometimes it’s easy to get lost in the noise of people telling you to ‘get online’ and ‘be social’. Have you got Facebook? Are you on Twitter? Do you blog? What’s your LinkedIn? Do you YouTube? But, what’s it all for? In the world of social media, it’s hard to find the one answer you’re looking for: What should you be doing? It’s better to think about these tools in terms of what you and your business actually need. Being free to sign-up, doesn’t mean they are cost-free for you. For a business, the implications of these tools don’t just stop at the unknown costs. And what’s the right tool for you? To realise the full potential of any of these social media tools, you need to be selective and you need to understand just what you might be getting in for. Before you jump in, you need to dig a little deeper into some of these tools. It’s good to connect, but it’s wonderful to connect successfully.