How to Find Anything Online: Become an Internet Research Expert 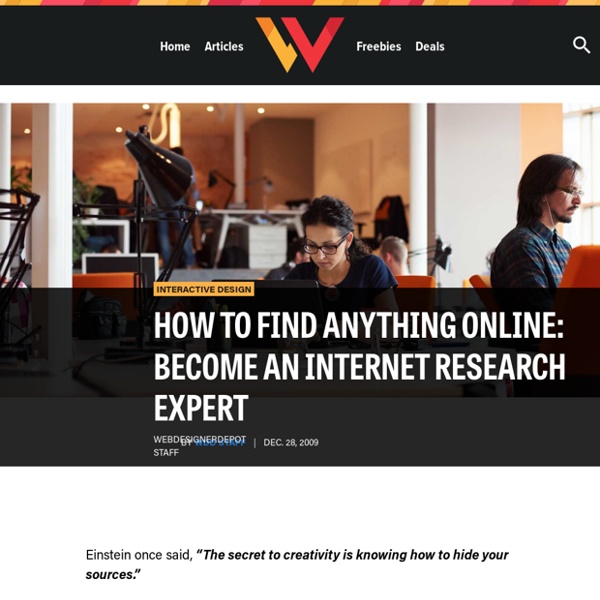 Einstein once said, “The secret to creativity is knowing how to hide your sources.” The same could be said of intelligence. What they don’t tell you is that the “smart” people of the world are, in most cases, just better at researching and learning things than everyone else. But researching is a learned skill, not something you’re born with. And while some people might be predisposed to learn things more easily than others, it’s generally not enough to make a measurable difference. By learning how to research, you can quickly and fairly easily become knowledgeable about just about anything. It’s all there, online, for free. Start with Wikipedia Whenever you try to learn something new on the Internet, start with Wikipedia. The main reason to start with Wikipedia is that it gives a good overview of most topics. Sure, any given page is bound to have some inaccuracies (as is the case on most user-generated websites), but most of the content is generally reliable. Move on to Google Go Multimedia

Say goodbye to Google: 14 alternative search engines Well it’s been a big week for search, I think we can all agree. If you’re a regular Google user (65% of you globally) then you’ll have noticed some changes, both good and bad. I won’t debate the merits of these improvements, we’ve done that already here: Google kills Right Hand Side Ads and here: Google launches Accelerated Mobile Pages, but there’s a definite feeling of vexation that appears to be coming to a head. Deep breath… As the paid search space increases in ‘top-heaviness’, as organic results get pushed further off the first SERP, as the Knowledge Graph scrapes more and more publisher content and continues to make it pointless to click through to a website, and as our longstanding feelings of unfairness over Google’s monopoly and tax balance become more acute, now more than ever we feel there should be another, viable search engine alternative.

Gadgets and Geek Toys hackers love! Laser Virtual Keyboard Laser projects a full-size keyboard onto flat surfaces. Connects to Bluetooth-enabled devices including iPad, iPhone, and laptops. Rechargeable battery lasts 150 minutes. Full-Size Keyboard for iPhone A full-size QWERTY keyboard that allows you to input text into your iPhone from its keys. SEO Checklist for Website Owners: Updated for 2016 and Beyond - Search Engine Journal If you’re still stuck on the same old on-page SEO routine, it’s time to wake up, smell the coffee, and figure out what’s up in 2016. If you’re waking up from 2010, you’ve got a long way to go, Rip Van Winkle. But even if you’re poking into the SEO world from just a few months ago, you might be surprised at how much changed while you were away. We’re always in need of “updated” information for SEO, and I thought now was a great time to release my updated checklist. I’ve organized this list into three main sections: SEJ SUMMIT.

20 Websites To Free EBooks We understand that reading is the simplest way for human to derive and constructing meaning in order to gain a particular knowledge from a source. This tendency has been digitized when books evolve into digital media equivalent – E-Books. It would be nice if we’re able to download free e-book and take it with us. That’s why we’ve again crawled deep into the Internet to compile this list of 20 places to download free e-books for your use. Great Websites to Download Ebooks FreeBookSpot Top 6 Underground Search Engines You Never Knew About Advertisement I love Google, Bing and Yahoo just as much as the next Internet user, but sometimes you really want to dig down into a particular subject. In order to do that, you really need access to those underground search engines that may not be quite as well known, but they dig much more deeply into specialized areas of the Internet than the general search engines are capable of. In many cases, these search engines are tapped into what is currently termed the “invisible web,” which is the information available on the Internet that standard search engines don’t have access to, because they are buried behind query forms or directory requests.

16 best youtube tricks everyone must try Youtube is the third most popular website on internet after google and facebook. It has 800 million unique users a month.In every minute 300 hours of new videos were uploaded to the site. If you want to watch a movie or if you want to watch funny videos or past news we would always prefer to use youtube. Most of the people who uses internet watch youtube videos almost everyday. But most of them don’t know many features that youtube provides.

Gov. Accountability Office: Managing Natural Resources The federal government owns and manages approximately 650 million acres of land in the United States—about 30 percent of the nation’s total surface area (see fig. 1). Figure 1: Federal Lands Managed by the Forest Service, Bureau of Land Management, Fish and Wildlife Service, and National Park Service Four major federal land management agencies—the Department of Agriculture’s U.S. Forest Service and the Department of the Interior’s Bureau of Land Management (BLM), U.S. 15 Websites to Find People On The Internet In an era of booming social networks, it’s easier to find lost friends and colleagues than it ever was before. The Positive Impact of Social Networking Sites on Society The Positive Impact of Social Networking Sites on Society Social networking isn't for everyone, but it's now such a massive part of all our lives, whether we embrace or reject the notion, that it can no longer be ignored. But are social networking sites...