Singularity Hub - Designer Babies - Like It Or Not, Here They Come 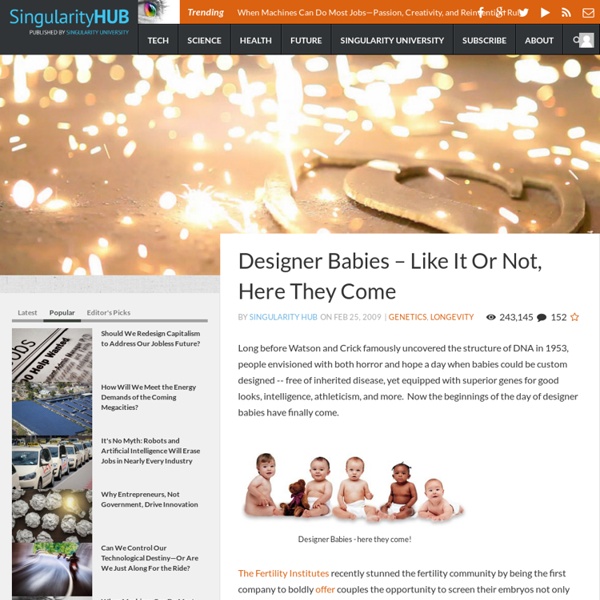 Long before Watson and Crick famously uncovered the structure of DNA in 1953, people envisioned with both horror and hope a day when babies could be custom designed -- free of inherited disease, yet equipped with superior genes for good looks, intelligence, athleticism, and more. Now the beginnings of the day of designer babies have finally come. The Fertility Institutes recently stunned the fertility community by being the first company to boldly offer couples the opportunity to screen their embryos not only for diseases and gender, but also for completely benign characteristics such as eye color, hair color, and complexion. The Fertility Institutes proudly claims this is just the tip of the iceberg, and plans to offer almost any conceivable customization as science makes them available. Even as couples from across the globe are flocking in droves to pay the company their life's savings for a custom baby, opponents are vilifying the company for shattering moral and ethical boundaries.

Henrietta Lacks Early life (1920–1940)[edit] Henrietta Lacks was born Loretta Pleasant on August 1, 1920,[1][3] in Roanoke, Virginia, to Eliza and Johnny Pleasant.[4] Her family is uncertain how her name changed from Loretta to Henrietta.[1] Eliza, her mother, died giving birth to her tenth child in 1924.[4] After the death of his wife, Henrietta's father felt unable to handle the children, so he took them all to Clover, Virginia, and distributed the children among relatives. The 4 year-old Henrietta, nicknamed Hennie, ended up with her grandfather, Tommy Lacks, in a two story log cabin that had been the slave quarters of her white great-grandfather's and great uncles' plantation.[1] She shared a room with her 9 year old first cousin David "Day" Lacks (1915–2002).[1][4] Later life (1941–1950)[edit] In 1935, at the age of 14, Lacks gave birth to a son, Lawrence. Lacks and her husband had three other children: David "Sonny" Jr. Diagnosis and death (1951)[edit] Legacy[edit] Scientific research[edit]

The Worm In Your Brain | The Loom One of the most fascinating things about the history of life is the way distantly related species can look alike. In some cases, the similarities are superficial, and in other cases they are signs of a common ancestry. And sometimes–as in the case of our brain and the brains of worms–it’s a little of both. The biggest feature of our brains is a massive stack of densely woven neurons called the cerebral cortex. Once our brains take in sensory information, it’s the cortex that integrates it, makes sense of it, learns from it, and decides how to respond. Vertebrates are not the only animals with a nervous system, however. The similarities between mushroom bodies and our cortex are not overwhelming, but they are tantalizing. On the other hand, mushroom bodies are missing a lot of the landmarks of the vertebrate cortex. Traditionally, scientists have concluded that mushroom bodies and the cortex are an example of convergence. The cortex now turns out to follow the same story as the eye.

Halcyon Molecular’s William Andregg: “The Only Way To Reach The Stars Is To Live Longer” This week’s episode of Speaking Of… (video below) features the founder/CEO of Halcyon Molecular, William Andregg. Andregg grew up in Arizona. There’s a song by The Orb called Little Fluffy Clouds that describes the light-pollution-free Arizonan sky quite perfectly, with amazing clouds, sunsets and stars. Most Arizonans – at some point in their lives – will lay on the hood of their car and gaze towards the grandness of those fluffy clouds and the Milky Way, but most probably won’t come to the same conclusions that William did about it all. William yearned to travel beyond the clouds to the stars, but become perplexed by the fact that he most likely wouldn’t make it due to an unfortunate condition that plagues us all — mortality. Halcyon Molecular has come out of stealth mode, letting William tell his story in order to encourage a few good business women and men to join their plight to end aging. What about frogs?