How to Search on Google: 31 Google Advanced Search Tips 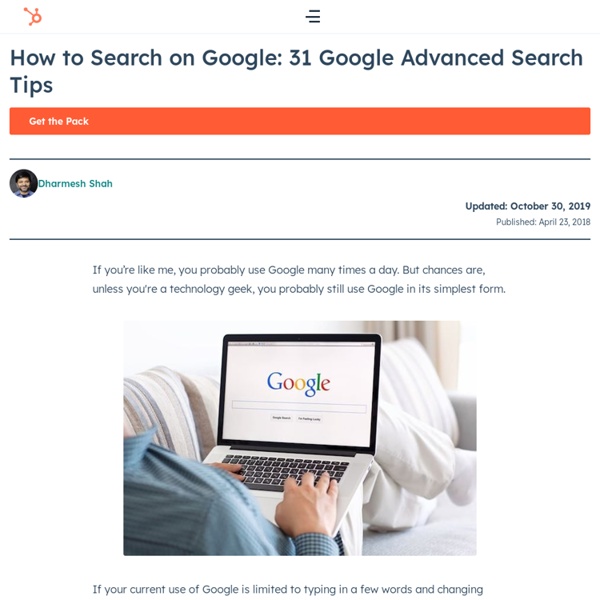 If you’re like me, you probably use Google many times a day. But chances are, unless you're a technology geek, you probably still use Google in its simplest form. If your current use of Google is limited to typing in a few words and changing your query until you find what you’re looking for, I’m here to tell you that there’s a better way -- and it’s not hard to learn. On the other hand, even if you are a technology geek and can use Google like the best of them already, I still suggest you bookmark this article of Google advanced search tips. Then, you’ll then have the tips on hand when you're ready to pull your hair out in frustration watching a neophyte repeatedly type in basic queries in a desperate attempt to find something. → Download Now: SEO Starter Pack [Free Kit] The following Google advanced search tips are based on my own experience and things that I actually find useful. Here's an overview of some of the most useful Google search tricks. 1. Example Search: "inbound marketing" 2.

Using Google Docs to provide Authentic Learning Experiences and Feedback to our students Listen to this episode and subscribe today! Podcast: Play in new window | Download In this episode of the TechEducator Podcast, we tackle the tough topic of teacher/student communication and together learn how to use Google Docs to create effective learning environments. Did you know that Google Docs features multiple ways of providing feedback to students in the form of Comments and Suggestions? Google Docs is not only a fantastic word processing application but one of the best communication tools for any teacher to use in the classroom.

Criminal law - Department of Justice and Regulation, Victoria Criminal law regulates conduct in society to protect the community and provides sanctions against those who commit crimes. The Victorian Government is taking action regarding the following criminal law issues: Children, Youth and Families Amendment (Disclosure of Youth Offending) Bill The government has released proposals to amend the Children, Youth and Families Act 2005.

Poetry and Literature Poet Laureate Consultant in Poetry Tracy K. Smith was appointed by Librarian of Congress Carla Hayden to serve as the 22nd Poet Laureate on June 14, 2017. Smith is the author of three books of poetry, including Life on Mars (2011), winner of the 2012 Pulitzer Prize for Poetry. Smith took up her duties in September 2017, opening the Library’s annual literary season with a reading of her work in the Coolidge Auditorium. More About Tracy K. Newspaper Map We have indexed all newspapers and plotted their correct locations, in 39 countries. Might have missed some. And most newspapers in another 199 countries, a bunch of them not in their correct locations. Add new ones here: add/correct "The immediate usefulness of Newspaper Map is readily apparent."

7 Must Have Google Docs Add-ons for Teachers Google Docs is a popular tool among teachers and students and several of you use it in their daily instruction. It offers a number of interesting features that allow users to easily create and share documents. It also supports collaborative team work and enables users to collectively work on the same document, exchange feedback and edit each other’s work in real-time. There are tons of other important features that make Google Docs a must have tool in your instructional digital toolkit. We have covered several of them in previous posts here in EdTech and mLearning. Court & police records - Court cases in Australia - Research Guides at State Library of Victoria Accessing judgments 'A judgment outlines the facts of the case, discusses the evidence and refers to legislation and case law upon which the judicial decision is based. Judgments record, explain and communicate judicial decisions and the legal reasoning behind the decision' (source). Judgments provide useful summaries of the key points of a case. They are also important reading if you want to understand legal precedent.

Be a better writer in 15 minutes: 4 TED-Ed lessons on grammar and word choice There’s no denying it — the English language can be mighty tricky. When writing a paper, a novel or even an e-mail, you might look at a sentence you just wrote and think, “Is that comma supposed to be there?” or “Is that really the best word to use?” Fear not! Wikipedia… a credible source? Over the years, Wikipedia has managed to create a chasm between educators. Some educators have preached that great evil resides in all things Wiki. Others, such as ourselves, have always said Wiki is a great place to begin research. Wiki has many advantages over a standard dusty set of 10 year old encyclopedias.

Classroom resources What's new Indigenous cultures and contact history Encounters includes an interactive map, digital timeline and online activities. It is based on the powerful stories shared by Aboriginal and Torres Strait Islander peoples in the Encounters exhibition. (Years 4–10). 10 Great Tools to Integrate with your Google Docs Since Google officially changed Google Docs name to Google Drive and a number of updates have been introduced to improve its overall performance. One very recent update is an increase of cloud storage capacity to 15GB usable across Gmail, Drive, and Google Plus. It is quite obvious that Google is trying to outsmart its immediate competitor Dropbox and I think Google is successful in its strategy so far. To make Google Drive stand out from the crowd, Google opened it to apps developers and allowed users to select from a wide variety of web apps to integrate into their Google Drive accounts.