How to reverse the Bystander Effect 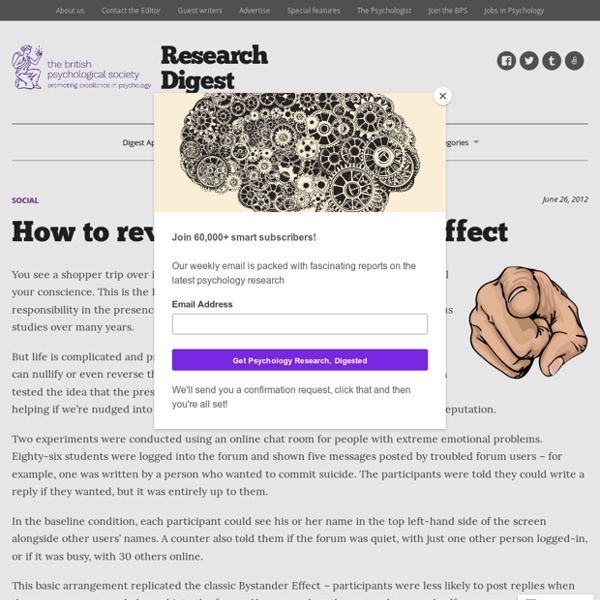 You see a shopper trip over in a busy street. Someone else can help. That’s what you tell your conscience. This is the Bystander Effect in action – the dilution of our sense of responsibility in the presence of other people – and it’s been demonstrated in numerous studies over many years. But life is complicated and psychologists have begun looking at the circumstances that can nullify or even reverse the effect. For a new paper, Marco van Bommel and his team tested the idea that the presence of others could in fact increase our proclivity for helping if we’re nudged into a self-aware mindset and thereby reminded of our social reputation. Two experiments were conducted using an online chat room for people with extreme emotional problems. In the baseline condition, each participant could see his or her name in the top left-hand side of the screen alongside other users’ names. Marco van Bommel, Jan-Willem van Prooijen, Henk Elffers, and Paul A.M. Like this: Like Loading... Related

How Reflex Responses and Personality Play into the Bystander Effect – Association for Psychological Science – APS When asked about emergency situations, most people say they would spontaneously help another person. However, not everyone does so in real life, especially when there are other people around, a phenomenon known as the bystander effect. Traditional explanations for bystander apathy include three psychological factors: diffusion of responsibility, or the reduction of individual feelings of responsibility when more people are present; evaluation apprehension, or the fear of unfavorable public judgment while helping; and pluralistic ignorance, or the belief that because no one is helping, the situation is not actually an emergency. Despite extensive literature on these three situational factors that facilitate bystander apathy, other non-situational factors are relatively unstudied. Hortensius and de Gelder first discuss the neural mechanisms of bystander apathy, exploring whether refraining from helping behavior reflects deliberative decision making or a more reflexive process. Reference

What the Kitty Genovese Killing Can Teach Today’s Digital Bystanders As Retro Report notes, two social psychologists in New York, John M. Darley and Bibb Latané, conducted experiments that led them to posit that Ms. Genovese might have survived had there been fewer witnesses. More than 50 years on, the murder of Kitty Genovese is still throwing up fresh psychological revelations By Christian Jarrett The horrific killing of Catherine “Kitty” Genovese in New York in 1964 inspired research into what’s known in social psychology as the Bystander Phenomenon – our increased disinclination to intervene when in the company of others. That’s because early reports told how 38 witnesses to Genovese’s murder did nothing to help.

A New Look at the Killing of Kitty Genovese: The Science of False Confessions – Association for Psychological Science – APS On March 13, 1964 a woman named Catherine “Kitty” Genovese was murdered outside of her apartment in Queens, New York. Over the course of a brutal attack lasting over 30 minutes, Genovese was stabbed at least 14 times. It was widely reported that despite Genovese’s screams for help, not a single one of the 38 bystanders at the apartment that night came to her aid. The case caught the attention of the public, as well as psychological scientists, leading to research on the “bystander effect.” But recent research raises the question: What if we’ve had the story all wrong for the last 50 years? After painstakingly reviewing historical records on the case, APS Fellow Saul Kassin (John Jay College of Criminal Justice) discovered that many important facts related to the case have been overlooked for decades.

The Bystander Effect: Reactions and Causes - PSYCHROD Bystander Effect: Reactions and Causes The bystander effect is an element of social psychology that implies that when the number of bystanders is increased in an emergency situation, the less likely any of the bystanders will aid, or assist in the situation (Aronson, Wilson, & Akert, 2013). The Bystander Effect: How to React If You See Someone Being Harassed Sherrif Karamat, CAE, is President and Chief Executive Officer of PCMA. Karamat also serves as President of the PCMA Foundation and Publisher of Convene magazine. As CEO, Karamat leads the vision, mission and promise for PCMA’s global family of brands. Overcoming the Bystander Effect — The RAD Group Research and personal experience both demonstrate that people are less likely to intervene (offer help) when there are other people around than they are when they are the only person observing the incident. This phenomenon has come to be known as the Bystander Effect and understanding it is crucial to increasing intervention into unsafe actions in the workplace. It came to light following an incident on March 13, 1964 when a young woman named Kitty Genovese was attacked by a knife-wielding rapist outside of her apartment complex in Queens, New York. Many people watched and listened from their windows for the 35 minutes that she attempted to escape while screaming that he was trying to kill her.

How to overcome the bystander effect While most of us are sympathetic toward helping someone, the bystander effect can prevent us from stepping in. The bystander effect is when a group of people sees a problem or someone in need, but no one does anything to help. Why don’t we help? One reason why people choose not to help is because they observe and follow what other people are doing. So if everyone is passing by and not paying attention, we conclude that what’s happening isn’t a big deal. After all, no one else looks concerned. How The Murder Of Kitty Genovese Created The Bystander Effect Wikimedia CommonsKitty Genovese whose muder would inspire the psychological phenomenon known as the bystander effect. At approximately 3:15 a.m. on March 13, 1964, a woman was murdered. Her name was Kitty Genovese. She was 28 years old, “self-assured beyond her years,” and had a “sunny disposition.” However, on that Friday evening, none of that mattered. As Kitty Genovese was stabbed to death in an alleyway outside her home, the friends and neighbors she had lived next to for several years stood by, choosing not to get involved as she lay there dying.