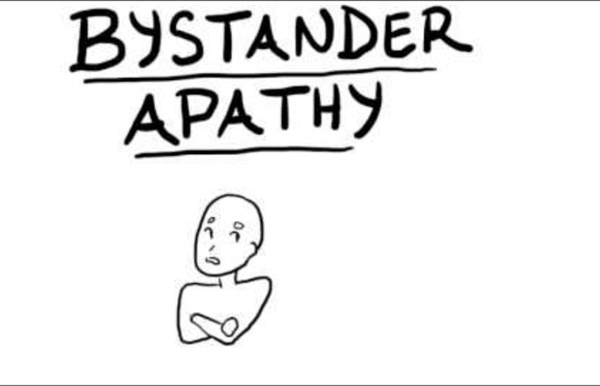 Related:  The Bystander Effect • An introduction to Bystander effect: Consequences and ways to overcome

untitled How Diffusion of Responsibility Affects Group Behavior Diffusion of responsibility is a psychological phenomenon in which people are less likely to take action when in the presence of a large group of people.1 For example, imagine that you are in a large city on a bustling street. You notice a man fall to the ground and start convulsing as if having a seizure. Many people turn and look at the man, but no one moves to help or call for medical assistance. Why? This situation is often used to explain the bystander effect, which suggests that the greater the number of people present, the less likely people are to help a person in distress. Darley and Latané on Diffusion of Responsibility In a series of classic experiments conducted in the late 1960s, researchers John Darley and Bibb Latané asked participants to fill out questionnaires in a room which suddenly began to fill with smoke.2 In one scenario the subjects of the experiment were alone when the smoke entered the room. Factors That Influence Diffusion of Responsibility

New Yorkers grapple with stabbing death New Yorkers are grappling with the inaction of more than two dozen pedestrians who didn't help a Good Samaritan bleeding to death on a sidewalk after he tried to save a woman from a knife-wielding man in Queens, N.Y. Hugo Alfredo Tale-Yax, 31, was stabbed at about 7:20 a.m. on April 18 as he tried to help a woman being threatened by a knife-wielding man. Surveillance video from an apartment building captured Tale-Yax chasing the attacker before collapsing on the sidewalk. Both the woman and attacker fled. Over the next hour and 20 minutes, more than 25 people walked by and did nothing. Most ignored him. In a city accustomed to anonymity and violence, New Yorkers were still disappointed with others. "It's man's inhumanity toward man," one man told the CBC's David Common. Psychologists attribute this behaviour to the bystander effect, also known as the Genovese syndrome, where the more people are around, the less likely it is for the person in trouble to get help.

Overcome bystander effect Quiz: What’s your bystander style? | Student Health 101 Bystander intervention is about the small things we all do for our friends and communities. When we see that someone is experiencing unwanted attention or pressure, we have a variety of ways we can check in: anything from a simple hello to a more creative disruption. The best interventions happen early on—right when we notice that something is off, and well before a situation escalates. How you choose to help others depends partly on your personality. 1. A. 2. A. 3. A. 4. A. 5. A. 6. A. Your score: What type of bystander are you? Score your responses according to the table below. What your score says about you + Direct interventionist explained You’re comfortable changing the trajectory when something’s wrong—by being caring and up front. How to step up your game + Distraction artist explained You’re great at subtly making space for others and changing the tone of an interaction. + Stealth operator explained You’re most comfortable working with other people, finding help, and following up.

Example: George Floyd's Death - Police violence and the ‘bystander effect’ explained Since George Floyd died after police officer Derek Chauvin knelt on his neck for almost nine minutes on May 25, demonstrators across the country have gathered to protest police actions against African Americans. While most of the protests were calm, in several cities police officers have used force against demonstrators and journalists under the justification of crowd control. The sight of officers in riot gear beating marchers, firing rubber bullets and chemical- or pepper-based irritants, and shoving activists has reignited questions about accepted practices in the nation’s law enforcement community. Francesca Gino, Tandon Family Professor of Business Administration at Harvard Business School, studies leadership, the psychology of decision-making, and organizational behavior. GAZETTE: When a police officer acts inappropriately, a common defense is that it’s “one bad apple,” not an entire department. This is not a story in isolation. This research, I think, gets to [this] question.

Toddler incident in China shows 'volunteer's dilemma' A security camera video of a toddler being run over twice on a street in China has swept across the Web in recent days and has drawn a chorus of horrified denunciations. How, we wonder, could so many passers-by have so callously ignored the girl's plight? As humans, we are horrified when we learn that a person in distress is not helped, even when, as in this case, many potential helpers are present. Our horror increases if the person is victimized in a particularly vicious or careless way by fellow human beings. Our horror is further heightened when we learn that the victim is helpless and the kind of person who normally stimulates our instinct to aid and protect. Our spontaneous reaction is to say: "Had I been there, I would have helped; what is wrong with these people?" It is true that cultural differences exist in many aspects of human behavior, and many of these differences are not trivial. Since the original experiments, many studies have explored the bystander effect.

Why do people break out of the bystander role? 'Bystander Effect' not exclusive to humans -- ScienceDaily A rat is less likely to help a trapped companion if it is with other rats that aren't helping, according to new research from the University of Chicago that showed the social psychological theory of the "bystander effect" in humans is present in these long-tailed rodents. The study, titled "The Bystander Effect in Rats," also demonstrated that in the presence of other potential helper rats, rats are more, rather than less, likely to help. Whether helping is facilitated or suppressed depends on the circumstances rather than on personal temperament or morals, a finding with implications for human society. In 2011, Peggy Mason, PhD, professor of neurobiology and senior author of the study, and her UChicago team of researchers found that rats consistently freed trapped companions, even saving a bit of chocolate for them, and this behavior was driven by a rat version of empathy. "My students had been bugging me to do this experiment for years," said Mason.

Overcoming the Bystander Effect Have you ever been a hero? Going about our daily routines, few of us have the opportunity to save a life or disrupt a crime in progress—fewer still take that opportunity when it presents itself. I once witnessed a car accident in which the guilty party leapt from his disabled vehicle and fled the scene. I quickly pulled over and dialed 911. Fortunately, another passerby stopped and apprehended the suspect. The culprit—who was clearly intoxicated—struggled to escape, but he was easily overpowered. Not only are acts of heroism unsurprisingly rare, reports about observers who, out of indifference or perplexity, fail to report criminal behavior or respond to emergencies with inaction are common. Psychologists Bibb Latané and John Darley identified a pattern of behavior they called the bystander effect, which they demonstrated in their labs for the first time in 1968. A number of options exist to help us overcome what in this case appears to be bystander effect on a massive scale.

Before smartphone becomes a daily necessity in the...

Related:
Related:  The Bystander Effect   -  An introduction to Bystander effect: Consequences and ways to overcome