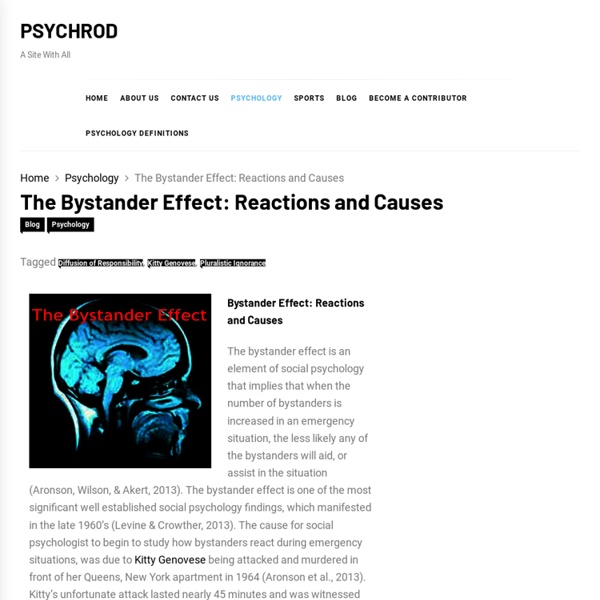 Bystander Effect: Reactions and Causes The bystander effect is an element of social psychology that implies that when the number of bystanders is increased in an emergency situation, the less likely any of the bystanders will aid, or assist in the situation (Aronson, Wilson, & Akert, 2013). The bystander effect is one of the most significant well established social psychology findings, which manifested in the late 1960’s (Levine & Crowther, 2013). The cause for social psychologist to begin to study how bystanders react during emergency situations, was due to Kitty Genovese being attacked and murdered in front of her Queens, New York apartment in 1964 (Aronson et al., 2013). Kitty’s unfortunate attack lasted nearly 45 minutes and was witnessed by nearly 38 residents who did not assist by calling police, or trying to stop her attacker (Aronson et al., 2013). Cultural Differences of Helping Behavior and The Bystander Effect References Aronson, E., Wilson, T., &Akert,R. (2013).

Understanding the Bystander Effect If you witnessed an emergency happening right before your eyes, you would certainly take some sort of action to help the person in trouble, right? While we might all like to believe that this is true, psychologists suggest that whether or not you intervene might depend upon the number of other witnesses present. What Is the Bystander Effect? The term bystander effect refers to the phenomenon in which the greater the number of people present, the less likely people are to help a person in distress. When an emergency situation occurs, observers are more likely to take action if there are few or no other witnesses. Being part of a large crowd makes it so no single person has to take responsibility for an action (or inaction).

﻿The Bystander Effect in Emergency Situations Mental Health The Bystander Effect in Emergency Situations By Karen Doll, Psy.D., L.P March 18, 2019 The Bystander Effect: How to React If You See Someone Being Harassed Sherrif Karamat, CAE, is President and Chief Executive Officer of PCMA. Karamat also serves as President of the PCMA Foundation and Publisher of Convene magazine. As CEO, Karamat leads the vision, mission and promise for PCMA’s global family of brands. Karamat serves the greater business events industry as a prominent business architect, enabling our community to become a catalyst for economic and social progress, organizational success, and personal and professional development.

Bystander Effect: What Is It and What You Can Do About It What the bystander effect looks like A little after 3 a.m. on March 13, 1964, Catherine “Kitty” Genovese parked her car and walked to her apartment in Queens, New York, after finishing her shift as a bar manager. Serial killer Winston Moseley was out to victimize someone that night. Genovese became his target. A New Look at the Killing of Kitty Genovese: The Science of False Confessions On March 13, 1964 a woman named Catherine “Kitty” Genovese was murdered outside of her apartment in Queens, New York. Over the course of a brutal attack lasting over 30 minutes, Genovese was stabbed at least 14 times. It was widely reported that despite Genovese’s screams for help, not a single one of the 38 bystanders at the apartment that night came to her aid.

From Empathy to Apathy: The Bystander Effect Revisited - Ruud Hortensius, Beatrice de Gelder, 2018 When people are asked whether they would spontaneously assist a person in an emergency situation, almost everyone will reply positively. Although we all imagine ourselves heroes, the fact is that many people refrain from helping in real life, especially when we are aware that other people are present at the scene. In the late 1960s, John M. Darley and Bibb Latané (1968) initiated an extensive research program on this so-called “bystander effect.” In their seminal article, they found that any person who was the sole bystander helped, but only 62% of the participants intervened when they were part of a larger group of five bystanders. Following these first findings, many researchers consistently observed a reduction in helping behavior in the presence of others (Fischer et al., 2011; Latané & Nida, 1981).