There's No Scientific Basis for Race—It's a Made-Up Label 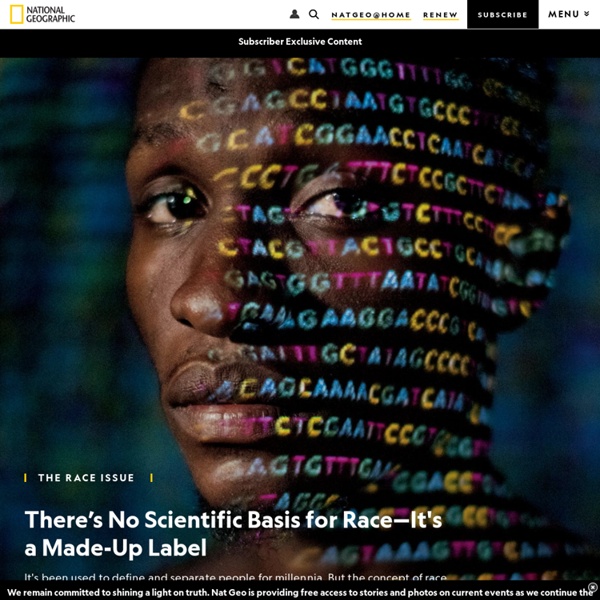 This story is part of The Race Issue, a special issue of National Geographic that explores how race defines, separates, and unites us. In the first half of the 19th century, one of America’s most prominent scientists was a doctor named Samuel Morton. Morton lived in Philadelphia, and he collected skulls. He wasn’t choosy about his suppliers. He accepted skulls scavenged from battlefields and snatched from catacombs. One of his most famous craniums belonged to an Irishman who’d been sent as a convict to Tasmania (and ultimately hanged for killing and eating other convicts). Morton believed that people could be divided into five races and that these represented separate acts of creation. “He had a lot of influence, particularly in the South,” says Paul Wolff Mitchell, an anthropologist at the University of Pennsylvania who is showing me the skull collection, now housed at the Penn Museum. Today Morton is known as the father of scientific racism. 1.

Climate change will displace millions Wildfires tearing across Southern California have forced thousands of residents to evacuate from their homes. Even more people fled ahead of the hurricanes that slammed into Texas and Florida earlier this year, jamming highways and filling hotels. A viral social media post showed a flight-radar picture of people trying to escape Florida and posed a provocative question: What if the adjoining states were countries and didn’t grant escaping migrants refuge? By the middle of this century, experts estimate that climate change is likely to displace between 150 and 300 million people. The 2018 Midterms and the Specter of Voter Suppression Read: The ‘hubris’ of the Supreme Court’s voting-rights ruling On Saturday, President Donald Trump ensured that the issue would be front and center as Election Day approached. “All levels of government and Law Enforcement are watching carefully for VOTER FRAUD, including during EARLY VOTING,” he tweeted. “Cheat at your own peril.

Buddhism: 11 Common Misunderstandings and Mistakes People believe many things about Buddhism that simply are incorrect. They think Buddhists want to get enlightened so they can be blissed out all the time. If something bad happens to you, it's because of something you did in a past life. Everybody knows that Buddhists have to be vegetarians. Unfortunately, much of what "everybody knows" about Buddhism isn't true.

Centuries-old Inca offering discovered in sacred lake Lake Titicaca was a sacred space to the ancient Andean empire of the Inca, which at its height in the early 16th century controlled territory from modern-day Colombia to Chile. The Inca built more than 80 temples and other structures for a variety of rituals on the Isla del Sol, or Island of the Sun, in the southern part of the lake in Bolivia, where their origin myth said the sun god was born and their primordial ancestors emerged from a rock. And they lowered offerings into the surrounding waters as they sent up fervent prayers.

Refusing to act on climate change will cost future generations $530 trillion (at least) - Techly By continuing to delay significant reductions in greenhouse gas emissions, we risk handing young people alive today a bill of up to US$535 trillion. This would be the cost of the “negative emissions” technologies required to remove CO₂ from the air in order to avoid dangerous climate change. These are the main findings of new research published in Earth System Dynamics, conducted by an international team led by US climate scientist James Hansen, previously the director of NASA’s Goddard Institute for Space Studies. The Paris Agreement in 2015 saw the international community agree to limit warming to within 2°C. The Hansen team argue that the much safer approach is to reduce atmospheric concentrations of CO₂ from the current annual average of more than 400ppm (parts per million) back to 1980s levels of 350ppm.

More acidic oceans 'will affect all sea life' Image copyright JAGO-TEAM/GEOMAR All sea life will be affected because carbon dioxide emissions from modern society are making the oceans more acidic, a major new report will say. The eight-year study from more than 250 scientists finds that infant sea creatures will be especially harmed. The Man Who Documented Native American Cultures Edward Sheriff Curtis The Man Who Documented Native American Cultures by Chris Nelson Born on a Wisconsin farm in 1868, Edward Sheriff Curtis became fascinated with photography early on, building his own camera at the age 10. As a teenager his family relocated to Seattle, where he photographed Princess Angeline (aka Kickisomlo), the daughter of the Duwamish chief Seattle, after whom the city is named.

Timeline: Human Evolution By John Pickrell 55 million years ago (MYA) First primitive primates evolve Plummeting insect numbers 'threaten collapse of nature' The world’s insects are hurtling down the path to extinction, threatening a “catastrophic collapse of nature’s ecosystems”, according to the first global scientific review. More than 40% of insect species are declining and a third are endangered, the analysis found. The rate of extinction is eight times faster than that of mammals, birds and reptiles. Growing Up Surrounded by Books Has a Lasting Positive Effect on the Brain, Says a New Scientific Study Image by George Redgrave, via Flickr Commons Somewhere in the annals of the internet--if this sprawling, near-sentient thing we call the internet actually has annals--there is a fine, fine quote by filmmaker John Waters: We need to make books cool again. If you go home with somebody and they don’t have books, don’t fuck them. Don’t let them explore you until they’ve explored the secret universes of books. Don’t let them connect with you until they’ve walked between the lines on the pages.

Recent discoveries fundamentally change our picture of human evolution - Business Insider As anthropologists have discovered new species of human ancestors, our understanding of human history has changed. By sequencing the genomes from our Neanderthal and Denisovan cousins, scientists have also gained new insight into the genetic origins of our species. As researchers make more of these breakthroughs, the puzzle of who we are and where we came from gets more complicated.The earliest humans may have emerged much earlier, and in a different place in the world, than scientists previously thought.Visit Business Insider's homepage for more stories. In recent years, anthropologists around the world have discovered new human ancestors, figured out what happened to the Neanderthals, and pushed back the age of the earliest member of our species.

Religion in the Ancient World Religion (from the Latin Religio, meaning 'restraint,' or Relegere, according to Cicero, meaning 'to repeat, to read again,' or, most likely, Religionem, 'to show respect for what is sacred') is an organized system of beliefs and practices revolving around, or leading to, a transcendent spiritual experience. There is no culture recorded in human history which has not practiced some form of religion. In ancient times, religion was indistinguishable from what is known as 'mythology' in the present day and consisted of regular rituals based on a belief in higher supernatural entities who created and continued to maintain the world and surrounding cosmos.