Why should you read "The Handmaid's Tale"? - Naomi R. Mercer 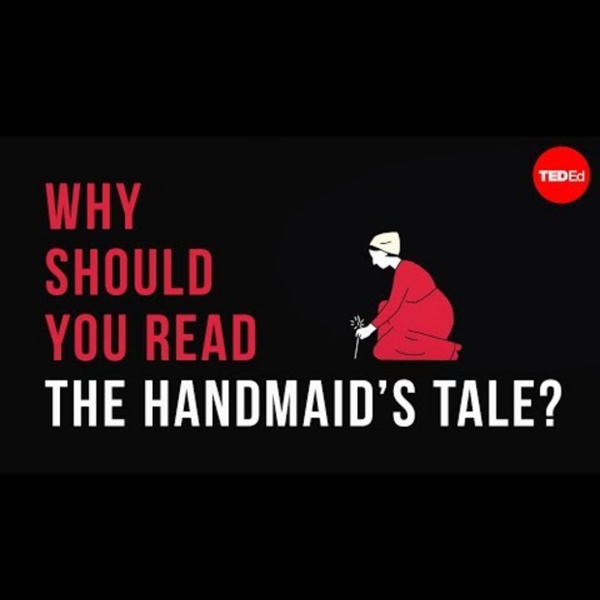 ‘The Handmaid’s Tale’ inspires a provocative public art piece on the High Line Margaret Atwood’s 1985 dystopic novel The Handmaid’s Tale, about life (and revolt) in an authoritarian, theocratic United States of the future, is now the subject of an adaptation that premiered yesterday on Hulu. Starring Mad Men’s Elisabeth Moss and Orange Is the New Black’s Samira Wiley, the seemingly all-too-timely series is, as Vox’s Todd VanDerWerff writes, not “just a show about now; it’s a show about always.” But for those who may not be familiar with the source material—and truly, this is a case where reading the book ahead of watching the series is highly encouraged—there’s a new public art piece on the High Line that hopes to change that. Designed by Paula Scher and Abbott Miller of the design studio Pentagram, the installation opened with 4,000 copies of The Handmaid’s Tale placed in the elevated park’s Chelsea Market Passage. The books are free to the public, and will be available until April 30.

A Handmaid’s Tale of Protest Silent, heads bowed, the activists in crimson robes and white bonnets have been appearing at demonstrations against gender discrimination and the infringement of reproductive and civil rights. The outfits are inspired by the characters in “The Handmaid’s Tale,” by Margaret Atwood. The 1985 novel, which was made into a series on Hulu this year, tells the story of a religious coup that gives rise to a theocracy called Gilead, where women are stripped of rights and forced to bear children for the society’s elite. Some have drawn comparisons between the show and the current political climate. In Vanity Fair, one critic explored whether it was an allegory for the Trump era. In The New Yorker, a reviewer discussed its “grotesque timeliness”; another at the same publication said that already “we live in the reproductive dystopia” the show presents.

eu.yorkdispatch It’s not particularly fair to “The Handmaid’s Tale” that its third season comes in the middle of a national debate over the sanctity of life and, more specifically, what constitutes life. Hulu didn’t plan for the release to time perfectly around a series of anti-abortion bills popping up around state houses around the country. Nor did showrunner Bruce Miller — or even author Margaret Atwood, for that matter. But here we are. The third season of the dystopian drama, which is now streaming, picks up immediately after last season’s finale, which saw June (Elisabeth Moss) hand her newborn off to the fleeing Emily (Alexis Bledel) and choose instead to stay in Gilead and fight, or resist, or something.

‘Hostile Architecture’: How Public Spaces Keep the Public Out Strips of sharp metal teeth run alongside a low garden wall on East 96th Street. Metal bars divide a public bench on East 47th Street. Ugly bolts line the ledges at a public plaza on East 56th Street. These are all ways of saying “don’t make yourself at home” in public. This so-called hostile architecture has flourished in New York, even as the city has significantly added more public space in the last decade, including new plazas and parkland, pedestrian areas once used for cars and reclaimed industrial waterfront. Proponents say this type of urban design is necessary to help maintain order, ensure safety and curb unwanted behavior such as loitering, sleeping or skateboarding.

The Handmaid's Tale Lesson Plans and Student Activities Each version of Storyboard That has a different privacy and security model that is tailored for the expected usage. Free Edition All storyboards are public and can be viewed and copied by anyone. They will also appear in Google search results. Personal Edition Edward Snowden: the whistleblower behind the NSA surveillance revelations The individual responsible for one of the most significant leaks in US political history is Edward Snowden, a 29-year-old former technical assistant for the CIA and current employee of the defence contractor Booz Allen Hamilton. Snowden has been working at the National Security Agency for the last four years as an employee of various outside contractors, including Booz Allen and Dell. The Guardian, after several days of interviews, is revealing his identity at his request.

Trump Has Made Alternative Facts a Way of Life The reasons the Republican base has shown such fidelity to Mr. Trump are multilayered. Many support his policy agenda and have a near-existential fear of what an ascent to power by a Democratic president would mean. Margaret Atwood: 'The Handmaid's Tale is being read very differently now' What do you predict is next in this current wave of feminist protests? Ursula Le Guin has a very good thing on anger, in which she says anger is a tool. So you have a tool, it’s a powerful tool and you use it, but then there's the hard slog of making real changes. So in what areas are those real changes going to be made? Margaret Atwood on What ‘The Handmaid’s Tale’ Means in the Age of Trump Which brings me to three questions I am often asked. First, is “The Handmaid’s Tale” a “feminist” novel? If you mean an ideological tract in which all women are angels and/or so victimized they are incapable of moral choice, no. If you mean a novel in which women are human beings — with all the variety of character and behavior that implies — and are also interesting and important, and what happens to them is crucial to the theme, structure and plot of the book, then yes. In that sense, many books are “feminist.”