Equality Is Not Enough: What the Classroom Has Taught Me About Justice 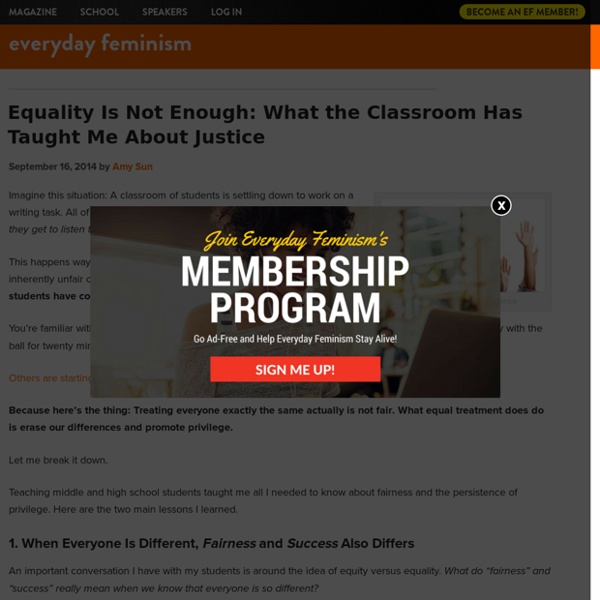 Imagine this situation: A classroom of students is settling down to work on a writing task. All of a sudden, one student exclaims, “That’s not fair! Why do they get to listen to the instructions on the headphones! I want to listen, too!” This happens way more often than you think. Not because teachers are inherently unfair creatures (I would know; I’m a teacher), but because students have come to understand “fairness” as simply equal treatment. You’re familiar with this playground mentality of fairness: “I get two crackers, and you two crackers” or “I play with the ball for twenty minutes, and then you play with it for twenty minutes.” Others are starting to question this “Sharing is Caring” idea and over-simplistic expectations of fairness. Because here’s the thing: Treating everyone exactly the same actually is not fair. Let me break it down. Teaching middle and high school students taught me all I needed to know about fairness and the persistence of privilege. 1. That would be privilege.

Taking Notes By Hand May Be Better Than Digitally, Researchers Say Laptops are common in lecture halls worldwide. Students hear a lecture at the Johann Wolfang Goethe-University on Oct. 13, 2014, in Frankfurt am Main, Germany. Thomas Lohnes/Getty Images hide caption The Role of School in Adolescents’ Identity Development. A Literature Review Characteristics of the Literature The 111 articles were found across a wide variety of scientific journals (n = 80). In total, 19 of the 111 articles were theoretical in nature. Among the empirical research papers, six articles were quantitative in nature and another set of seven articles employed a mixed-methods design.

Ethnic and Racial Minorities & Socioeconomic Status Socioeconomic status (SES) encompasses not just income but also educational attainment, financial security, and subjective perceptions of social status and social class. Socioeconomic status can encompass quality of life attributes as well as the opportunities and privileges afforded to people within society. Poverty, specifically, is not a single factor but rather is characterized by multiple physical and psychosocial stressors. Further, SES is a consistent and reliable predictor of a vast array of outcomes across the life span, including physical and psychological health. 2nd Grade Students Cover Their Teacher’s Dress In Drawings, And Her Story Takes Over The Internet Sometimes arming a bunch of 8-year-olds with paint and markers doesn’t have to result in a disaster. In fact, it can turn into a beautiful work of art! This is exactly what happened to Haley Curfman, a 2nd-grade teacher in Blackwell, Oklahoma. Haley bought a beautiful white dress, set it up in her classroom and encouraged her students to draw on it. The only rule she had – children were not allowed to cross out anything.

Smile! Could the pandemic lead to happier times? In January 2018, a Yale University professor named Laurie Santos launched a course, Psychology and the Good Life, which quickly became the most popular class in the institution’s 319-year-history. After 13 years at Yale, in 2016, the 44-year-old had taken charge of one of the university’s residential colleges and had become alarmed by widespread mental illness and stress. She wanted to explain the paradox of why so many students were still suffering, having achieved their dreams of being admitted to Yale and having met society’s definition of success. Santos created the lecture series in a bid to teach her students what really mattered – to help them carve out lives of meaning and contentment. Within a few days of the course’s launch, roughly a quarter of Yale’s entire undergraduate population had signed up. A few months later, in March 2018, Santos launched a 10-week online version of the original happiness course that anyone could access.

The importance of teaching kids about LGBTQ history and culture Over the past decade, there’s been a plethora of books aimed at children on LGBTQ themes. Some of these books tell familiar romantic fairy tales with same-sex protagonists, while others provide basic education about kids who might be transgender. Author Gayle Pitman, however, is trying to create space for books that actually teach kids about LGBTQ history and culture. Pitman’s latest book, Sewing the Rainbow, tells the story of Gilbert Baker, inventor of the Pride Flag. Not only does the short story talk about the importance of the flag, it shows that Baker was a proud gay man, but that his sexuality wasn’t his only defining feature. Pitman also wrote the picture book This Day in June, which features illustrated scenes from a Pride parade.

Mom Asks Pediatrician About The Idea Of Kids Going To School Again, Receives A Reality Check As the back-to-school date in the US is slowly approaching, more and more parents are seriously doubting whether to send their kids to school. With Covid-19 infections rising in 41 states and southern hotspots already undertaking crisis measures on Thursday, many feel like reopening schools physically would be hurried and plain dangerous. So one mom and book author from Atlanta named Aesha Saeed turned to her children’s pediatrician for advice. She found the doctor’s opinion “sobering because headlines and pundits are one thing, but a doctor I’ve trusted my children’s well-being to since each were born” is another.

Lgbt Books LGBT is an initialism that stands for lesbian, gay, bisexual, and transgender. In use since the 1990s, the term is an adaptation of the initialism LGB, which was used to replace the term gay in reference to the LGBT community beginning in the mid-to-late 1980s. The initialism LGBT is intended to emphasize a diversity of sexuality and gender identity-based cultures.

What Do We Know About Children and Coronavirus Transmission? Key Points: With just a few weeks remaining before schools in the U.S. are scheduled to reopen, and the federal government encouraging in-person schooling, there remain many questions about the risk COVID-19 poses to children and their role in transmission of the disease. Indeed, other countries have not reopened schools with the levels of community transmission found in the U.S., coupled with its insufficient testing and limited contact tracing.Our review of the latest available data indicates that, while children who are infected with COVID-19 are more likely to be asymptomatic and less likely to experience severe disease (though a small subset become quite sick), they are capable of transmitting to both children and adults.What remains unclear and where evidence is still needed is: whether children are less likely to be infected than adults and, when infected, the frequency and extent of their transmission to others.