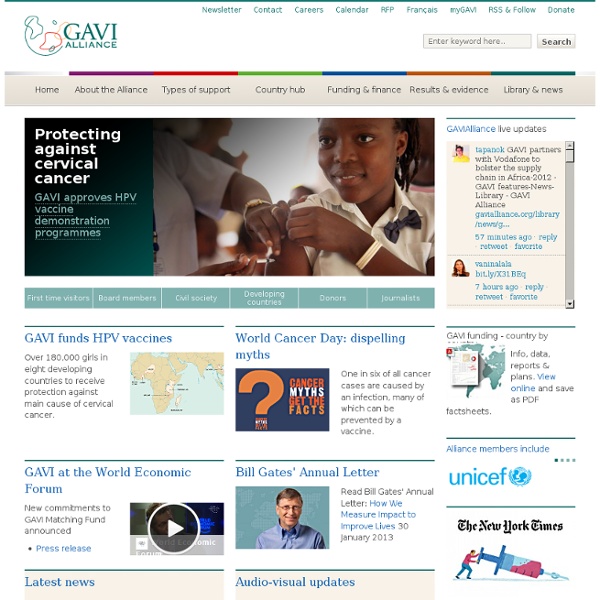 Animal Welfare Institute Industrialised country pharmaceutical industry - GAVI's partnership model - About the Alliance GAVI partners with the International Federation of Pharmaceutical Manufacturers Association to provide the right vaccines in the right amounts to the developing country market GAVI's partnership with vaccine companies in the industrialised world provides a critical bridge for harnessing their research and technical expertise to making and supplying vaccines that address the needs of developing countries. The Alliance's partners among industrialised country vaccine manufacturers are members of the International Federation of Pharmaceutical Manufacturers Association. Building on their engagement in the Children's Vaccine Initiative launched in 1990, IFPMA members have worked in partnership with the GAVI Alliance since its launch in 2000, suppling vaccines to a number of key GAVI-supported programmes: Crucell supplied the first internationally-available, fully liquid pentavalent (5-in-1) vaccine Quinvaxem™. Advance Market Commitment Through the Alliance, vaccine companies receive:

HEALTH: Vaccine targets world's biggest child-killer | Global | Gambia | Kenya | Niger | Rwanda | Sierra Leone | Uganda | Yemen | South Africa | Aid Policy | Children | Early Warning | Education Read this article in: عربي Rapidly scaling up the vaccine could avert 700,000 deaths by 2015 and seven million deaths by 2030 NAIROBI/KILIFI, 14 February 2011 (IRIN) - An estimated 700,000 deaths could be averted by 2015 with the widespread use of a vaccine against pneumonia and other pneumococcal diseases that are the world's biggest child-killer. More than half a million children younger than five die from pneumococcal disease every year, according to the UN World Health Organization (WHO). It accounts for 18 percent of child deaths in developing countries. "The global introduction of pneumococcal vaccination marks a historic milestone in global health," Matshidiso Moeti, the WHO's assistant regional director for Africa, said at a press briefing ahead of the launch in Kenya on 14 February. At US$3.50 per dose, the vaccine being issued in developing countries is about 90 percent cheaper than in the developed world. Challenges kr/jk/mw

Progressive Animal Welfare Society Animals : Animal Rights, Welfare, and Services People helping animals Charts Fundraising Events Fundraising Program Expenses PAWS is a champion for animals--rehabilitating injured and orphaned wildlife, sheltering and adopting homeless cats and dogs, and educating people to make a better world for animals. Charities Performing Similar Types of Work Highly Rated Most Viewed This charity has an official representative registered with Charity Navigator. How the pneumococcal AMC works - Pneumococcal AMC - Funding & finance The Pneumococcal Advance Market Commitment has helped speed up the development and availability of pneumococcal vaccines for developing countries. Follow the process that makes this possible In this pilot AMC, donors commit funds to guarantee the price of vaccines once they have been developed. These financial commitments provide vaccine manufacturers with the incentive they need to invest in vaccine research and development, and to expand manufacturing capacity. In exchange, companies sign a legally-binding commitment to provide the vaccines at a price affordable to developing countries in the long term. World Bank Donors make grant payments to the World Bank, in accordance with its specific schedule or through an agreed demand-based payment arrangement. The World Bank holds donor payments on its balance sheet. UNICEF: Calls for Supply Offers Based on a 15-year Strategic Demand Forecast (SDF), which GAVI updates on a semi-annually basis, UNICEF issues Calls for Supply Offers. Manufacturers

HEALTH: Pneumonia action falling short | Afghanistan | Angola | Bangladesh | Burkina Faso | DRC | Ethiopia | Indonesia | Kenya | Niger | Nigeria | Pakistan | Tanzania | Uganda Read this article in: عربي Pneumonia patient in Pakistan, which has one of the world's 15 highest caseloads of the disease BANGKOK, 11 November 2010 (IRIN) - Efforts to treat and prevent pneumonia are falling short in the 15 countries responsible for three-quarters of the world’s annual deaths from the disease, according to a “report card” issued by the US-based International Vaccine Access Center (IVAC) at Johns Hopkins University. Pneumonia kills more children under five every year – 1.6 million – than measles, HIV/AIDS and malaria combined, according to the World Health Organization (WHO). In its 2009 Global Action Plan for Prevention & Control of Pneumonia, the UN Children’s Fund and WHO calculated that reducing indoor air pollution, improving child nutrition, vaccination coverage and treatment could reduce deaths caused by pneumonia. "The beauty of pneumonia is that interventions are at hand. pt/mw

Global Exchange - Building People-to-People Ties joins global vaccine alliance to help prevent millions of children from contracting pneumococcal disease in the world’s poorest countries This press release is intended for business journalists and analysts/investors. Please note that this release may not have been issued in every market in which GSK operates. - Unique finance mechanism ensures vaccinations will begin in 2010 - Up to 300 million doses to be supplied over ten years - Synflorix™ supplied at around 90% reduction of cost in developed markets Issued: Tuesday 23 March 2010, London UK GSK has become one of the first manufacturers to sign a unique agreement with the GAVI Alliance (GAVI) that has the potential to save millions of children from dying in the world’s poorest countries. The agreement is funded by a ground-breaking mechanism called an Advance Market Commitment (AMC) and is the result of years of planning by GAVI, UNICEF, the World Bank and major donors, who recognised the potential of vaccines to prevent diseases in developing countries. Notes to editors Synflorix helps protect against diseases due to Pneumococcus. [i] GAVI Alliance (2009).

Advance market commitments An advance market commitment is a binding contract, typically offered by a government or other financial entity, used to guarantee a viable market if a vaccine or other medicine is successfully developed. As a result of such a commitment, the market for vaccines or drugs for neglected diseases would be comparable in size and certainty to the market for medicines for rich countries. This would enable biotech and pharmaceutical companies to invest in the development of new vaccines to tackle the world’s most pressing health problems, such as pneumonia, diarrheal disease, HIV/AIDS, and malaria, in the normal course of their business decisions. First AMC announced Feb, 2007[edit] “With the launch of the first AMC, we can save lives, and we will do it with the investment and expertise of industry,” said Wolfowitz. The AMC concept was developed in response to a tragic dilemma, noted Italian Finance Minister Tommaso Padoa-Schioppa, whose government has committed US$635 million to the AMC pilot.

PATH Malaria Vaccine Initiative: Our research and development strategy MVI's research and development (R&D) strategy supports the long-term goal of eradicating malaria. The strategy aims to build on the success of GlaxoSmithKline Biologicals' RTS,S vaccine candidate that is now in the final stage of development in seven African countries. The strategy also includes approaches that seek to block malaria transmission and approaches that use weakened, whole parasites to protect against the disease. MVI's R&D projects largely focus on Plasmodium falciparum, the most destructive malaria parasite that is found mainly in Africa. Most new projects come to MVI as preclinical feasibility studies, with only a limited number advancing to full portfolio programs on a clinical track. In addition to providing direct support for vaccine development, MVI also invests in evaluation technologies to assess the potential efficacy of vaccine components. Related Resource:

Overview - Mission - About 25 million children do not receive life-saving vaccines that parents in rich nations take for granted. GAVI's mission: to redress the balance Mission focus On 31 January 2000, the Global Alliance for Vaccines and Immunisation was launched as a partnership of WHO , UNICEF , the World Bank , the Bill & Melinda Gates Foundation , developing countries, international development and finance organisations and the pharmaceutical industry. Its mission: to save children’s lives and protect people’s health by increasing access to immunisation in the world’s poorest countries. By pulling the specialist skills of all the main players in immunisation into one, decision-making body, GAVI is designed to bring a single-minded focus to the urgent task of closing three critical gaps in the provision of life-saving vaccines: GAVI mission statement between children for whom immunisation is a given and the 24 million children in developing countries with no access to vaccines. The impact of GAVI’s first 10 years