How you talk to your child changes their brain 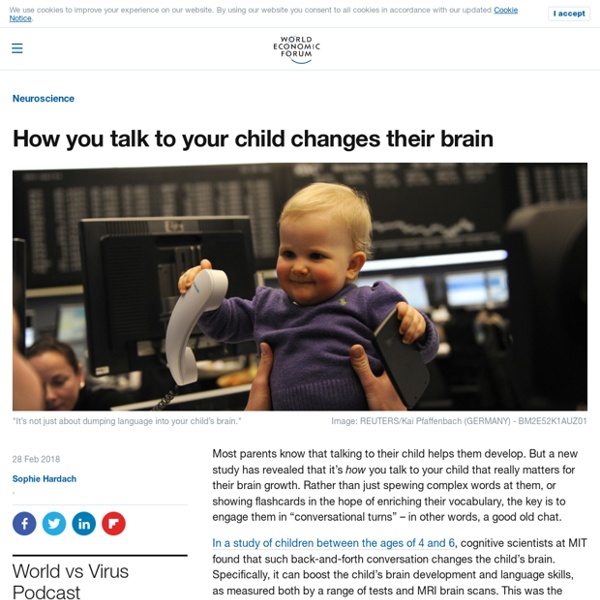 Most parents know that talking to their child helps them develop. But a new study has revealed that it’s how you talk to your child that really matters for their brain growth. Rather than just spewing complex words at them, or showing flashcards in the hope of enriching their vocabulary, the key is to engage them in “conversational turns” – in other words, a good old chat. In a study of children between the ages of 4 and 6, cognitive scientists at MIT found that such back-and-forth conversation changes the child’s brain. Specifically, it can boost the child’s brain development and language skills, as measured both by a range of tests and MRI brain scans. This was the case regardless of parental income or education. “The important thing is not just to talk to your child, but to talk with your child. The finding adds an important twist to what we know about language and development. In fact, the MIT study suggests that parents should perhaps talk less, and listen more.

Getting the right balance between adult-led and child-initiated learning As an early years practitioner you will know the importance of creating the right balance between adult-led and child-initiated learning. Help all children learn and develop with this guide. Adult-led activities are based on our own professional understanding of what we should teach young children and what experiences they should have. Through adult-led activities we can introduce children to new ideas, provide opportunities for them to develop their skills and ensure that they experience all areas of learning in the Early Years Foundation Stage (EYFS).

Importance of play for babies & children Australian Government Department of Education and Training (2009). Belonging, being and becoming: The early years learning framework for Australia. Canberra: Commonwealth of Australia. "I Said I Want the Red Bowl!" Responding to… Amelia, told that she can’t have a fifth book before bedtime, shouts: “You are the meanest mommy! You are not invited to my birthday party!” Derek, when offered a choice between carrots and cheese, not ice cream, before dinner announces: “I don’t like the choices you are choicing me!” Alex hurls a bowl of his favorite cereal off the table and screams, “I said the red bowl, not the blue bowl!” If any of these exclamations sounds familiar, you are not alone. Welcome to what can feel like the Wild West of toddlerhood.

Primary school shake-up to focus on ‘play-led’ learning Children at primary schools would not study traditional subjects until as late as 10 years of age, under proposals being considered by policymakers. Instead, there would be a much greater emphasis on creative play during the early years of primary school, and broader areas of learning in later years. The reforms are based loosely on some of the features of top-performing education systems in countries such as Finland, as well as new research on how children learn.

Sound Words: Examples of Onomatopoeia Onomatopoeia is a fun, linguistic tool used in literature, songs and advertisements. Now that you've seen examples of the individual words, consider the following examples of onomatopoeia words in use. Take a look at the different onomatopoeia examples in Todd Rundgren's song, appropriately named Onomatopoeia. The cognitive benefits of play: Effects on the learning brain © 2008 - 2014, Gwen Dewar, Ph.D., all rights reserved Science supports many of our intuitions about the benefits of play. Playful behavior appears to have positive effects on the brain and on a child’s ability to learn.

Ten ways to support your child’s English-learning at home As the British Council opens a new Learning Time with Shaun & Timmy centre in Mexico for two- to six-year-olds, senior teacher Sarah Reid offers some useful tips for supporting your child’s learning at home. More and more parents want their children to learn English from a young age. I often meet parents of children as young as two or three who say that proficiency in speaking English will help their child 'get ahead in a globalised world'. In other words, the sooner their children get started, the better. The single most important factor in a child’s success with English is their parents' interest and encouragement, no matter what their child’s age. So what can parents do at home to support their learning?

The Power (and Peril) of Praising Your Kids What do we make of a boy like Thomas? Thomas (his middle name) is a fifth-grader at the highly competitive P.S. 334, the Anderson School on West 84th. Slim as they get, Thomas recently had his long sandy-blond hair cut short to look like the new James Bond (he took a photo of Daniel Craig to the barber). Unlike Bond, he prefers a uniform of cargo pants and a T-shirt emblazoned with a photo of one of his heroes: Frank Zappa. Thomas hangs out with five friends from the Anderson School. How young children learn English as another language By Opal Dunn, educational consultant and author Introduction Young children are natural language acquirers; they are self-motivated to pick up language without conscious learning, unlike adolescents and adults.