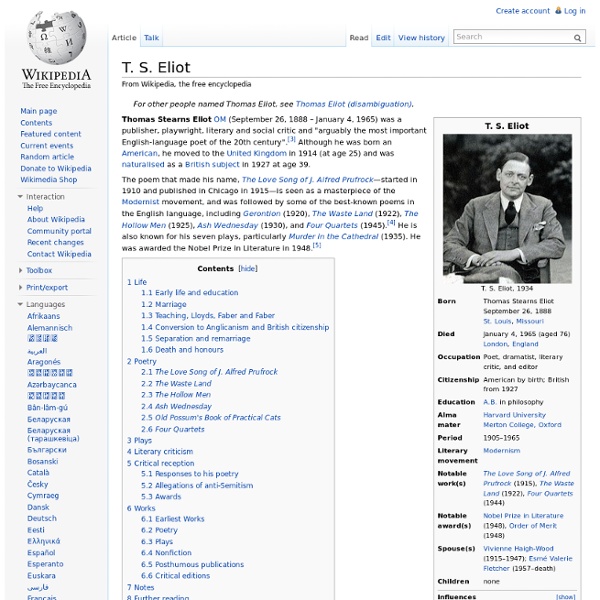 Thomas Stearns Eliot OM (26 September 1888 – 4 January 1965) was an essayist, publisher, playwright, literary and social critic and "one of the twentieth century's major poets."[1] Born in St. Louis, Missouri in the United States, he moved to the United Kingdom in 1914 (at age 25) and was naturalised as a British subject in 1927 at age 39. Life[edit] Early life and education[edit] Eliot was born into the Eliot family, a middle class family originally from New England. Several factors are responsible for Eliot's infatuation with literature during his childhood. Following graduation, Eliot attended Milton Academy in Massachusetts for a preparatory year, where he met Scofield Thayer, who would later publish The Waste Land. After working as a philosophy assistant at Harvard from 1909 to 1910, Eliot moved to Paris, where from 1910 to 1911, he studied philosophy at the Sorbonne. By 1916, he had completed a doctoral dissertation for Harvard on Knowledge and Experience in the Philosophy of F.

Lost Generation The "Lost Generation" was the generation that came of age during World War I. The term was popularized by Ernest Hemingway, who used it as one of two contrasting epigraphs for his novel, The Sun Also Rises. In that volume Hemingway credits the phrase to Gertrude Stein, who was then his mentor and patron. The Love Song of J. Alfred Prufrock - Wikipedia Composition and publication history[edit] T.S. Eliot in 1923, photographed by Lady Ottoline Morrell Arthur Conan Doyle Sir Arthur Ignatius Conan Doyle KStJ, DL (22 May 1859 – 7 July 1930) was a Scottish physician and writer who is most noted for his fictional stories about the detective Sherlock Holmes, which are generally considered milestones in the field of crime fiction. He is also known for writing the fictional adventures of a second character he invented, Professor Challenger, and for popularising the mystery of the Mary Celeste.[1] He was a prolific writer whose other works include fantasy and science fiction stories, plays, romances, poetry, non-fiction, and historical novels. Life and career[edit] Early life[edit]

Modernist literature Literary Modernism has its origins in the late 19th and early 20th centuries, mainly in Europe and North America. Modernism is characterized by a self-conscious break with traditional styles of poetry and verse. Modernists experimented with literary form and expression, adhering to the modernist maxim to "Make it new." The modernist literary movement was driven by a desire to overturn traditional modes of representation and express the new sensibilities of their time. [ 1 ] [ edit ] Introduction Dionysus Dionysus (/daɪ.əˈnaɪsəs/; Greek: Διόνυσος, Dionysos) is the god of the grape harvest, winemaking and wine, of ritual madness, fertility,[2][3] theatre and religious ecstasy in Greek mythology. Alcohol, especially wine, played an important role in Greek culture with Dionysus being an important reason for this life style.[4] His name, thought to be a theonym in Linear B tablets as di-wo-nu-so (KH Gq 5 inscription),[5] shows that he may have been worshipped as early as c. 1500–1100 BC by Mycenean Greeks; other traces of the Dionysian-type cult have been found in ancient Minoan Crete.[6] His origins are uncertain, and his cults took many forms; some are described by ancient sources as Thracian, others as Greek.[7][8][9] In some cults, he arrives from the east, as an Asiatic foreigner; in others, from Ethiopia in the South. He is a god of epiphany, "the god that comes", and his "foreignness" as an arriving outsider-god may be inherent and essential to his cults.

Malcolm Cowley Malcolm Cowley (August 24, 1898 – March 27, 1989)[1] was an American novelist, poet, literary critic, and journalist. Early life[edit] Education[edit] Marriage and family[edit] The Waste Land - Wikipedia "The Waste Land", by T.S. Eliot, is widely regarded as "one of the most important poems of the 20th century" and a central text in Modernist poetry.[1][2] Published in 1922, the 434-line[B] poem first appeared in the United Kingdom in the October issue of The Criterion and in the United States in the November issue of The Dial. It was published in book form in December 1922. Among its famous phrases are "April is the cruellest month", "I will show you fear in a handful of dust", and the mantra in the Sanskrit language "Shantih shantih shantih".[C]

Little Gidding (poem) Little Gidding is the fourth and final poem of T. S. Eliot's Four Quartets, a series of poems that discuss time, perspective, humanity, and salvation. It was first published in September 1942 after being delayed for over a year because of the air-raids on Great Britain during World War II and Eliot's declining health. The title refers to a small Anglican community in Huntingdonshire, established by Nicholas Ferrar in the 17th century and scattered during the English Civil War. The poem uses the combined image of fire and Pentecostal fire to emphasise the need for purification and purgation.

Retro-futurist techno hyperstasis *This Simon Reynolds essay is great. I feel I must annotate the whole thing. Oh wait wait wait — I have to appropriate it in toto — that’s it. *Reynolds speaks: Age of Enlightenment The Age of Enlightenment (or simply the Enlightenment, or Age of Reason) is an era from the 1650s to the 1780s in which cultural and intellectual forces in Western Europe emphasized reason, analysis and individualism rather than traditional lines of authority. It was promoted by philosophes and local thinkers in urban coffeehouses, salons and masonic lodges. It challenged the authority of institutions that were deeply rooted in society, such as the Catholic Church; there was much talk of ways to reform society with toleration, science and skepticism. New ideas and beliefs spread around the continent and were fostered by an increase in literacy due to a departure from solely religious texts.

Shakespeare and Company (bookstore) Interior Shakespeare and Company is the name of two independent bookstores on Paris's Left Bank. The first was opened by Sylvia Beach on 19 November 1919 at 8 rue Dupuytren, before moving to larger premises at 12 rue de l'Odéon in the 6th arrondissement in 1922. During the 1920s, it was a gathering place for writers such as Ezra Pound, Ernest Hemingway, James Joyce and Ford Madox Ford. It closed in 1940 during the German occupation of Paris and never re-opened. The second is situated at 37 rue de la Bûcherie, in the 5th arrondissement.

Gerontion - Wikipedia "Gerontion" is a poem by T. S. Eliot that was first published in 1920. The work relates the opinions and impressions of a gerontic, or elderly man, through a dramatic monologue which describes Europe after World War I through the eyes of a man who has lived the majority of his life in the 19th Century.[1] Eliot considered using this already published poem as a preface to The Waste Land, but decided to keep it as an independent poem.[2] Along with The Love Song of J. The Age of Reason Title page from the first English edition of Part I Most of Paine's arguments had long been available to the educated elite, but by presenting them in an engaging and irreverent style, he made deism appealing and accessible to a mass audience. The book was also inexpensive, putting it within the reach of a large number of buyers. Fearing the spread of what they viewed as potentially revolutionary ideas, the British government prosecuted printers and booksellers who tried to publish and distribute it.