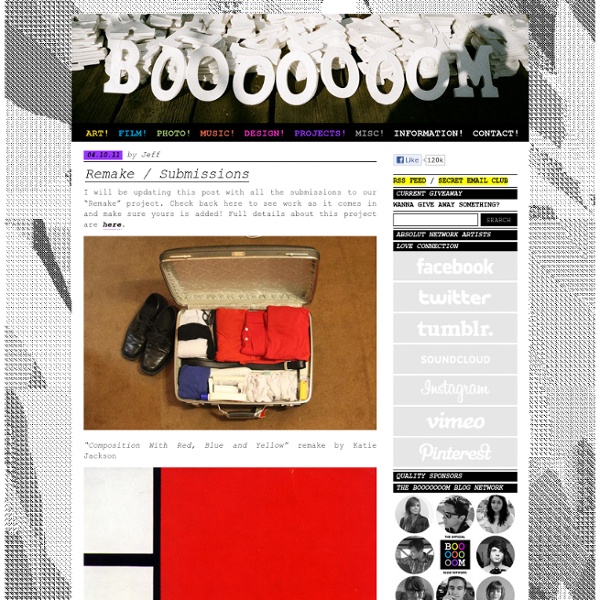 I will be updating this post with all the submissions to our “Remake” project. Check back here to see work as it comes in and make sure yours is added! Full details about this project are here. “Composition With Red, Blue and Yellow” remake by Katie Jackson “Composition With Red, Blue and Yellow” by Mondrian “Weeping Woman” remake by Frances Adair Mckenzie “Weeping Woman” by Picasso “The Two Fridas” remake by Claire Ball “The Two Fridas” by Frida Kahlo “Le Désespéré” remake by Stefano Telloni “Le Désespéré” remake by Dani Catao “Le Désespéré” by Gustave Courbet “The Little Dance” remake by Floida and Fabiola Skraqi “The Little Dance” by Degas “Pot Pourri” remake by Tania Brassesco and Lazlo Passi Norberto “Pot Pourri” by Herbert James Draper “Las Meninas” remake by Natalie Pereira “Las Meninas” by Velasquez “The Beaneater” remake by Mark Bass “The Beaneater” by Annibale Carracci “Portrait of Frank O Hara” remake by Steven Reigns “Portrait of Frank O Hara” by Mario Schifano “The Ship” by Salvador Dali

marklaita RON van der ENDE Stephen Mallon—Next Stop Atlantic Photography can often dance along a thin line between art and documentation, artist Stephen Mallon takes full advantage of this. Mallon’s newest series, Next Stop Atlantic, takes an intimate look at what happens to New York City Subway cars when they are retired. Mallon captures these massive hunks of steal being dumped into the ocean to create an artificial reef in the Atlantic Ocean. New York City Subway Cars have always seemed to play an interesting roll in history of art. Immediately I am reminded of the golden age of graffiti when a writer could go All City. See more of Stephen Mallon here. Knit the 2012 Olympics With Ingenious Craft Book <em>Knitlympics</em> anova books/Promo image Don't have a ticket to London's 2012 Olympics? No problem, knit your own. A delightful little knitting book, Knitlympics, has patterns for your own private Olympics: the coveted ticket, podium, winning medals, Olympic torch and the laurel wreath. Oh yes, and the athletes too. Twenty top Olympians over the years are yours for the making... Needles poised and you too can have anyone from Mark Spitz (7 gold medals in 1972) with a moustache to Jesse Owens to Carl Lewis to lightening-speed runner Usain Bolt sitting in your room, ready to join you in front of the TV. Holding up the women's end of the Games, there is Florence Griffith-Joyner, Flo-Jo to those old enough to remember (1984 Games), Olga Korbut, the gymnast, also an old-timer from 1976, but forever young in wool. How close are the knitted ones to the real thing? The book is published by Collins & Brown, and lovingly created by Carol Meldrum.

Classic: Eugene Smith's 'Country Doctor' - Photo Gallery For his groundbreaking 1948 LIFE magazine photo essay, “Country Doctor” — seen here, in its entirety, followed by several unpublished photographs from the shoot — photographer W. Eugene Smith spent 23 days in Kremmling, Colorado, chronicling the day-to-day challenges faced by an indefatigable general practitioner named Dr. Ernest Ceriani. Six decades later, Smith’s images from those three weeks remain as fresh as they were the moment he took them, and as revelatory as they surely felt to millions of LIFE’s readers the instant they opened the issue in which they appeared, and encountered Dr. Ceriani, his patients, and his fellow tough, uncompromising Coloradoans. Eugene Smith’s at-times almost unsettlingly intimate pictures illustrate in poignant detail the challenges faced by a modest, tireless rural physician — and gradually reveal the inner workings and the outer trappings of what is clearly a uniquely rewarding life.

News Forget Your Past – Timothy Allen | Photography | Film Buzludzha, Bulgaria Meanwhile… in Bulgaria .. Over the years I’ve visited my fair share of abandoned buildings. They’ve always held a very strong attraction for me. It has to be said, that when I was younger there were a hell of a lot more interesting derelict buildings around. Of course my opinion is an unfairly idealised and overly romantic one. Our first view of Buzludzha in the snow storm I first heard about the Buzludzha monument (pronounced Buz’ol’ja) last summer when I was attending a photo festival in Bulgaria. I knew instantly that I had to go there and see it for myself. Sure enough, 6 months later amidst the worst winter weather the country had experienced for many years, I was back in Bulgaria, and with the help of my friend Kaloyan Petrov we drove the 250km from Sofia to the edge of the Balkan Mountain range in which this magnificent building is located. Every day we had a gruelling trek through deep snow to reach the monument. … The monument during its glory days

This is What Happens When You Give Thousands of Stickers to Kids This December, in a surprisingly simple yet ridiculously amazing installation for the Queensland Gallery of Modern Ar, artist Yayoi Kusama constructed a large domestic environment, painting every wall, chair, table, piano, and household decoration a brilliant white, effectively serving as a giant white canvas. Over the course of two weeks, the museum’s smallest visitors were given thousands upon thousands of colored dot stickers and were invited to collaborate in the transformation of the space, turning the house into a vibrantly mottled explosion of color. How great is this? Given the opportunity my son could probably cover the entire piano alone in about fifteen minutes. If you liked this you’ll also enjoy Roman Ondak’s Room of Heights and Karina Smigla-Bobinski’s helium-filled kinetic drawing sculpture. The first four images courtesy Queensland Art Gallery and photographer Mark Sherwood.