A Summary of the Bystander Effect: Historical Development and Relevance in the Digital Age 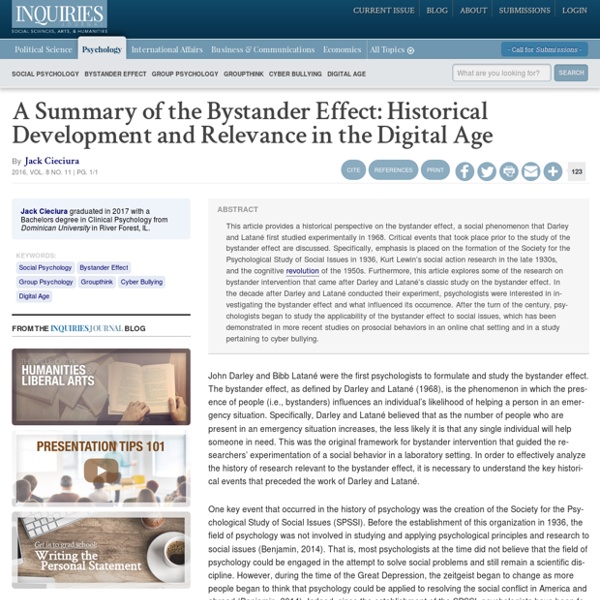 If You Need Help, You'd Better Ask For It Picture this. You’re out hiking in the wilderness—all alone and miles from civilization. You turn a corner on the trail and come upon a young man in torn clothes, looking disheveled and a little incoherent. You’re on your way to your campsite, but he clearly needs help. As you approach, he explains he broke his leg, he’s been in the woods for days, and that he’d appreciate it if you could carry him, even just a few meters, to help him get back to the trailhead. How Diffusion of Responsibility Affects People Diffusion of responsibility is a psychological phenomenon in which people are less likely to take action when in the presence of a large group of people.1 For example, imagine that you are in a large city on a bustling street. You notice a man fall to the ground and start convulsing as if having a seizure. Many people turn and look at the man, but no one moves to help or call for medical assistance. Why? Because there are so many people present, no one person feels pressured to respond.

Bystander Effect Bystander effect, the inhibiting influence of the presence of others on a person’s willingness to help someone in need. Research has shown that, even in an emergency, a bystander is less likely to extend help when he or she is in the real or imagined presence of others than when he or she is alone. Moreover, the number of others is important, such that more bystanders leads to less assistance, although the impact of each additional bystander has a diminishing impact on helping. Investigations of the bystander effect in the 1960s and ’70s sparked a wealth of research on helping behaviour, which has expanded beyond emergency situations to include everyday forms of helping.

New York Today: The City’s Bystander Effect Good morning on this clear Monday. The first time I dialed 911 in New York was on a subway platform at 42nd Street — last week. A woman was bleeding on her head and neck; she had fallen on the stairs between the platform and turnstiles. Some passengers hurried past her. Others stopped to look and moved on. Bullying in School An attack on a Syrian refugee teenager in the United Kingdom, captured in a widely-shared video, has sparked global outrage and prompted a crowdfunding campaign that has raised more than $175,000 for the family. The video, posted on Tuesday, showed the 15-year-old, whose arm is in a sling, being throttled by another teenager, and then wrestled to the ground at Almondbury Community School in Huddersfield city. The attacker appears to choke the teen by pouring water on his face, while pinning him down, saying, "I'll drown you." The video ends with the Syrian teenager walking away, without reacting, as his attacker and others are heard verbally abusing him.

Brief report: The bystander effect in cyberbullying incidents Abstract This study examined the bystander effect in cyberbullying. Using self-reported data from 257 Czech respondents who had witnessed a cyberbullying attack, we tested whether provided help decreased with increased number of other bystanders. We controlled for several individual and contextual factors, including empathy, social self-efficacy, empathic response to victimization, and relationship to the victim. Results showed that participants tend to help the victims more in incidents with only one or two other bystanders.

Story of Kitty Genovese The Kitty Genovese murder in Queens, New York, in 1964 is one of the most famous murder cases to come out of New York City and into the national spotlight. What propelled it wasn’t the crime or the investigation, but the press coverage that alleged the murder had many witnesses who refused to come to the Kitty Genovese’s defense. This has been disproved over time, but not before it became part of the accepted lore of the crime. Kitty Genovese was returning from work home at around 2:30 a.m. on March 13, 1964, when she was approached by a man with a knife. Toddler incident in China shows 'volunteer's dilemma' A security camera video of a toddler being run over twice on a street in China has swept across the Web in recent days and has drawn a chorus of horrified denunciations. How, we wonder, could so many passers-by have so callously ignored the girl's plight? As humans, we are horrified when we learn that a person in distress is not helped, even when, as in this case, many potential helpers are present.

Use Technology to combat the bystander effect The responsibility to help during an emergency falls on anyone present and capable of lending a hand. While there may be occasional good Samaritans who are able to aid, more often than not, the main responsibility falls on emergency respondents to step in. Understandably, the shock of witnessing a mugging, hijacking, terrorist attack or even a car accident can leave a bystander paralysed with shock and uncertain about what to do, or even fearful of getting involved altogether. A harrowing, often-cited case in point is the 1964 murder of Kitty Genovese – a New York woman was stabbed to death outside her apartment while dozens of witnesses reportedly heard her crying for help, and not a single one stepped into help or even called the police.

How the bystander effect can explain inaction towards global warming Not too long ago, I was preparing a lecture about group dynamics for my students at Delft University of Technology. One of the dynamics I wanted to introduce was the bystander effect. The bystander effect refers to the phenomenon that an individual’s likelihood of offering help in a critical situation decreases when passive bystanders are present (e.g., Darley & Latané, 1968). Bystander effect: Famous psychology result could be completely wrong By Grace Browne SolStock/Getty If you were being attacked, would anyone stop to help you? A famous result in psychology known as the bystander effect says probably not, but now a review of real-life violent situations says this commonly held view may be wrong.

TODAYonline A spotlight has been shone on sexual harassment cases in Singapore, with the recent #MeToo movement gaining traction in mainstream and social media. Currently, efforts towards tackling sexual harassment here are centred on the workplace. In 2015, Singapore launched the Tripartite Advisory on Managing Workplace Harassment, which aimed to be a practical guide for employers and employees to improve the prevention and management of workplace harassment.

An article describing the historical context surrounding the well-known phenomenon of the bystander effect by Darley and Latané in 1968 as well as a few research that came after that, concluding that the bystander effect is highly relevant in today's modern psychology. by agnestan Sep 22